A new stand-alone LittleBigPlanet game has been announced for PSN. Sackboy’s Prehistoric Moves will be a 10 level game with a dinosaur theme. It will play in a similar way to the platform style of the original full game, will be set in a tropical jungle, and will have the player dodging erupting volcanoes and other environmental hazards.

But, the game will require a MOVE motion controller and at least two players. The player with the Move controller will lead other players by interacting with the environments in ways such as flicking switches and triggering platforms. The players with normal Dual Shock controllers will all control a Sackboy.

Sackboy’s Prehistoric Moves will be available on the PlayStation Store on December 14 for $5.99. Or, on December 7 for all PlayStation Plus subscribers to download for free. It will also be included on the full game of LittleBigPlanet 2 when it is released on January 18.

At the same time as announcing Sackboy’s Prehistoric Moves, there was also an announcement that a LittleBigPlanet 2 demo will be coming to the PSN on December 21, as well as a new batch of beta trial invites that will be sent out to PlayStation Plus members in early December. 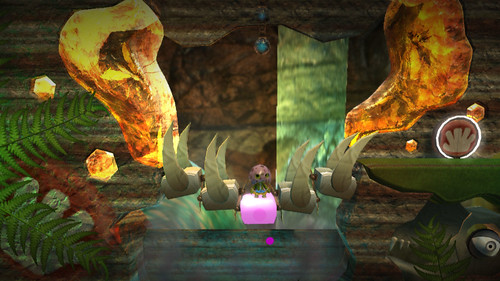