In an effort to further Sony’s recent push in digital distribution, the Japanese giant revealed that a brand new collection of games, titled PS3 essentials, will be available today on the PS Store. The games are available for either £16 or £10 (€19.99 or €14.99) depending on their relative age. Read on for the full list and details.

With the 500GB super slim PS3 rolling out over the coming weeks, it’s no surprise to see Sony really backing digital distribution, arguably for the first time. Minis and other concepts demonstrated Sony’s willingness to use the digital space, but only recently have they truly embraced the market. It was only yesterday that Sony revealed the PSN Day 1 Digital Program, which allows gamers to pre-order and pre-download (a la Steam) big titles so that they are playable on release day. With big games such as Resident Evil 6 and Assassin’s Creed 3 at fairly reasonable prices, it’s a promising system. Now, on the other end of the retail scale, Sony are offering bargain prices on older titles under the new PS3 Essentials programme. 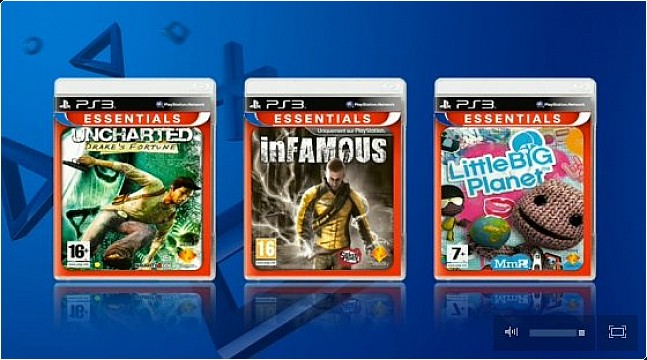 Almost all of the games on the list are good quality (with a few exceptions) and available for good prices. Old titles like the original Uncharted, Infamous or LittleBigPlanet are all available for just £9.99 which is a decent price for anyone who’s yet to pick up these PS classics. In fact, £10 is cheaper than on Amazon, something of a revelation for Sony’s digital distribution system. More recent games like Driver: San Francisco and Assassin’s Creed: Brotherhood are available for £15.99 which again is by no means a bad deal. Check the full title list below, the games marked with an * are in the cheaper price bracket.

Prince of Persia - The Forgotten Sands*

Call of Juarez: Bound in Blood*