Sony Letting You Vote for the Next Free PS Plus Game

"You'll be able to vote for the upcoming month's new free PS Plus offering from a choice of three titles"
By: Euan Dewar | PS4 News | July 30, 2015
Sony will soon be rolling out new PlayStation Network functionality that lets PlayStation 4 users vote for what game they want to see added to the PlayStation Plus free game lineup next.
Sony will soon be bringing out a new system on PSN that lets PS4 users actually vote for the upcoming month's free PS Plus game.
All of this has been extrapolated from a video that shows this new feature under the moniker "Vote to Play". You'll have a limited time to vote for you choice from three games and, of course, the one with the most votes at the end of that period will be your next free PS Plus game. The remaining two games will be discounted for all PS Plus users.
The first games up for "Vote to Play" are Armello, Grow Home, and Zombie Vikings.
[caption id="attachment_73038" align="aligncenter" width="600"] 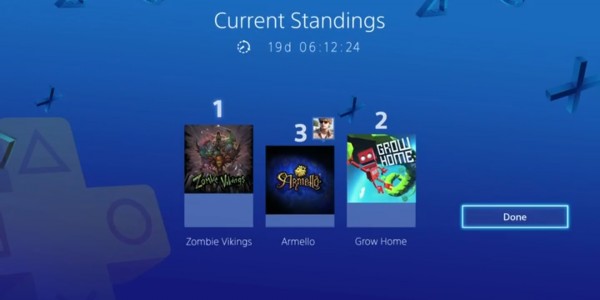