Far away in a land long ago… there was an orphan boy who dreamed of leaving his farm and becoming a horseman, only to be sidetracked by two druids with plans to destroy a dreaded Death Castle and the only man that can help them is old and crazy.  Behold! You get Space Warped, KaBoom!'s translation of a comic book that spoofs all the good things of Star Wars and meshes them with far begone era of our own history.

Space Warped is a hilarious comic.  It takes away all the epic space adventure that is Star Wars and turns it into an epic olden time tale. Think Space Balls meets Robin Hood: Men in Tights and that is what Space Warped is all about.  Here is an example of what to expect on this book.  During the first pages of the book, there is an epic chase between wagons.  One wagon is traveling with oxen, while the “Empire” is using bulls and they are quickly gaining on them.  While in the wagon chase, two druids named Ravi, and Hal are introduced and we are shown that they are franticly trying to leave the wagon since the empire is closing in on them.   Before escaping a princess name Leica stops one of the druids and relays a message that is only meant to the correct recipient anybody else who tries to get the message gets a cheesy song about pulling pig tails. The princess is captured by our dark villain named Lord Salvador. An evil Lord who has “IT”, a power that is supposed to be there version of the Force.  Yeah, its hilarious, and its spoofs like this that you will get through the entire issue. 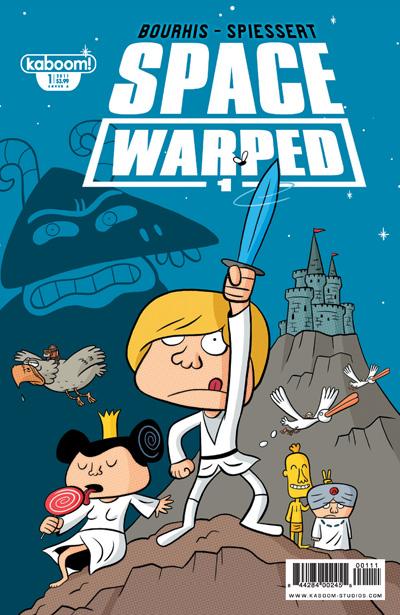 The jokes in the book are funny and have a lot of references to Star Wars. From the name of the characters to all the jokes about the franchise, the book delivers in the funny department.  What I really enjoy is that even though he is taking from a well known franchise, the writer adds his own flavor to the book and he makes it his own in a way.  The art on this book is perfect for the tone.  The cartoony sketches of all the characters shows that its not meant to be taken serious, it’s a book that is meant to sit back and enjoy the wackiness that it has to offer.

If you’re a huge Star Wars fan and enjoy movies like Space Balls and shows like Robot Chicken then this book is right up your ally.  The book is fun, charming and in its own way it pays tribute to probably one of the greatest Sci-Fi franchises of all time.