Spartacus: Vengeance – A Place In This World

A show like Spartacus: Vengeance is very difficult to gauge by normal standards. Ever since it carved a niche for itself on STARZ, the show has provided an abundance of entertainment, and not necessarily for all the right reasons. Although it has been widely publicized as a biographical action/adventure series, I prefer to think of it as a fantasy/drama coupled with blood & guts. Spartacus: Blood and Sand was a romping success because of this distinction and unfortunately "A Place In this World" fell short of what we usually take for granted on this show. 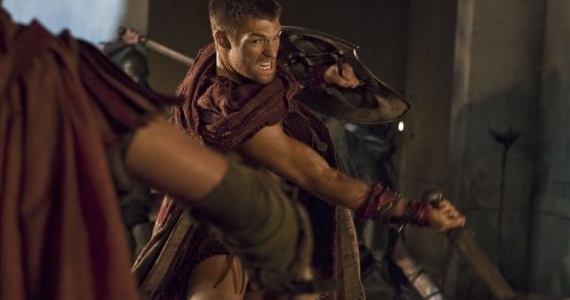 This episode went out of its way to try and create some distance between Spartacus & Glaber. After last week's confrontation, I expected things to heat up quite a bit between the two. But after Aurelia's death, Spartacus and his merry men decided to head south to aid Crixus in his search for Naevia, and to build an army while they're at it. The bread crumbs for Naevia's search led them to yet another sleazeball, an unsuspecting Dominus who was caught with his pants (or robes) down when Spartacus & company decided to pay him a visit. With all the blood soaked fun that was going on, it actually hit me for the first time that Spartacus & Crixus are really working together as true allies, and not just as an arrangement. But unfortunately, this moment was also where Andy Whitfield's absence was greatly felt. The first season spent a significant amount of time building the complicated relationship between Spartacus & Crixus. Andy Whitfield & Manu Bennett worked brilliantly together, but Friday's episode made it feel like the relationship had started from scratch, between two completely different people. Although it sounds terribly unreasonable to make that statement (it's only the second episode), and we know that Liam McIntyre is a completely different actor, but it was clearly evident (based on his speech for the freed slaves) that for the time being, he lacks the commanding presence that Andy Whitfield would have undoubtedly brought to the character. McIntyre was good in this episode, but not great. And definitely not as great as he was last week.

A siginficant error the writers probably shouldn't have made in this episode was the introduction of the backstory element focused on Oenomaus. Although I consider him to be one of the more intriguing characters on the show, going back in time to when he was first bought by Titus (and when Quintus Batiatus was a scrawny whelp) served no legitimate purpose other than to portray the internal conflict he was suffering from. Oenomaus' subjective feelings about his loss of identity (after betraying House Batiatus) are understandable, but this point was made in "Fugitivus". I didn't see the purpose of delving into it again, that too in such excruciating detail. But this episode did make up for its indiscretions by bringing back Ashur, another conniving character we loved to hate in season one. It was only a matter of time before he re-surfaced, and delaying the inevitable made no sense. I'm not completely convinced that Oenomaus' capture is the best way to go for the story, but I'm willing to go with the flow to see what happens. However, one thing is perfectly clear - Lucretia & Ashur are working together. How else do you explain the surprisingly healthy state in which Mr & Mrs Glaber found Lucretia?? A sinister plan is afoot, folks and I'm eager to see what it is. 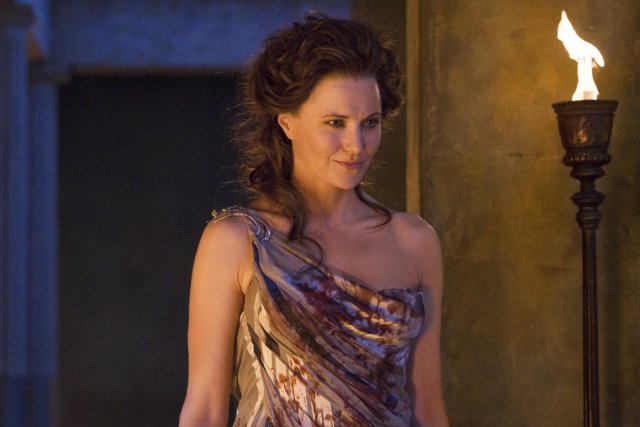 At this point, Glaber still appears to be an expendable character as far as I'm concerned. Lucretia seems to be pulling his strings to perfection & Ilithyia is too distracted to be concerned...or so we thought. I'm pretty sure the writers want to let us know that Ilithyia is a lot smarter than she leads us to believe. The fact that she was willing to kill Lucretia (despite her husband's plans for her), suggests that she is aware of Lucretia's true intentions. And let's not forget that Lucretia is the only living person (other than Glaber) who knows that Ilithyia killed Licinia last season. As for Lucretia, her whole 'crazy lady' routine seems to be working. The ritual sacrifice was difficult to watch, but we've come to expect bizarre things from this show, so nothing surprises me at this point. I still thing this installment of the series would be lost without Lucy Lawless. John Hannah was brilliant as Batiatus, and the show requires a serious antagonist for us to remain interested. I'm assuming that the writers have the license to toy with the lore a bit so promoting her as the primary antagonist makes sense.

It's always good to see new characters added into the mix. Tiberius is a half-Roman half-Syrian slave recently freed by Spartacus. Apparently suffering from an ancient form of Stockholm syndrome, Tiberius tried to kill Spartacus after he was released from his Dominus' grasp. Spartacus spared his life and decided to take him under his wing instead, obviously seeing in him a part of his former self. We also got to see a lot more of Seppius, the brat who controls most of the competent warriors in Capua. Did anybody else wish that Glaber had bitch-slapped this kid?? 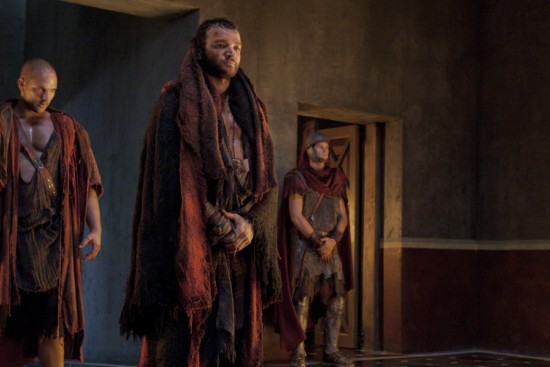 - So what is Oenomaus' fate going to be this week? The guy lost his wife, his House & his status as Doctore over two installments of the series. Hasn't he been through enough??

- I guess we now know how Lucretia's wound was so nicely stitched up! Ashur & Lucretia will make a formidable team against Spartacus & Crixus
.
- Where the hell is Gannicus? The current season needs a slight kick in the pants & Dustin Clare is just what the doctor ordered.

- What's a tell-tale sign that you're a die-hard Spartacus fan?? When one decapitation just isn't enough. How many did you count in this episode?

- I'm afraid we're still in the "What would Andy Whitfield do?" stage of this season. Hopefully, Liam McIntyre will shut us all up & deliver on what is expected of him.

I don't think we'll ever have a bad episode of the Spartacus series, since it clearly stands in a class of it's own. If a first-time viewer of the series would have watched Friday's episode, he (or she) would have been blown away by all the madness. All the elements that make the show special were there, but in the wrong proportions. Unfortunately, because of our insanely high standards, "A Place In This World" didn't quite deliver the goods.