Speculating Grand Theft Auto V’s Online: What Do We Want?

With Grand Theft Auto V coming out next month, many different parts of the game have been shown and talked about by Rockstar Games so far. We have seen gameplay, learned about our new protagonists and seen a lot of the new map. But one thing that has not got much attention so far is the multiplayer component. Referred to as ‘Grand Theft Auto Online,’ we know that details are coming this month and many hope the reason Rockstar have been so quiet is because they are preparing something big.


Continuing our series of GTA focused features after we previously highlighted out top 10 PC mods (which you can still check out here), now it is time for the focus to solely be on multiplayer. More information is just around the corner, but before we get all the juicy details why not speculate on what we hope GTA Online will include and go over the little information we know so far? After all, speculating about what’s coming in GTA is half the fun. So let’s start with what we do know.

The first mention of Grand Theft Auto V’s multiplayer came during promotion for Max Payne 3 back in March 2012 when Dan Houser was talking about how crews will work in their upcoming games. He confirmed that the crews you make will work in Max Payne 3 and also carry over for use in GTA V. So how could this work in GTA V? Obviously having your own group of friends you play with regularly is already a stable of online multiplayer, but with crews you get extras rewards for doing so. This could equal more cash and in game items to use in GTA Online. Another potential use of crews brings me onto something I hope to see play a big part in GTA Online, heists.


We know that heists play a huge part in single player, so it would only make sense they are present in multiplayer also. Being able to perform a diamond robbery with a group of friends online would be fantastic, with each person designated with their own job such as getaway driver, crowd control etc. You could also have a mode similar to ‘Cops and Robbers’ from GTA IV where one team must execute the heist with the opposing team playing as SWAT who have to stop you. The possibilities for clever online heists alone could make for a fascinating and unique take on open world multiplayer. 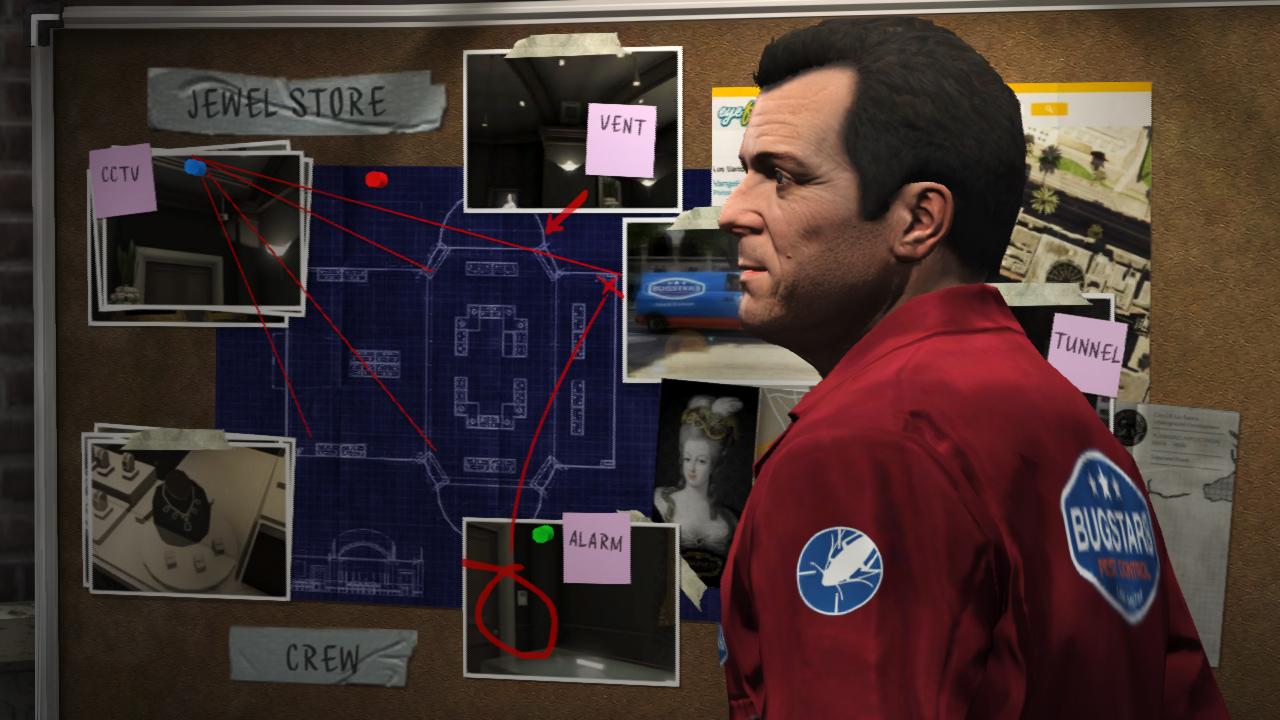 So what would be the point of these heists? Well seeing as the story is about chasing the almighty dollar, so should the multiplayer. Earning cash could be how you level up similar to GTA IV but you also get to spend this hard earned cash on numerous goodies to make your online friends jealous. We know that unique vehicles will feature in GTA Online as one of the Collector’s Edition bonuses includes a Khamelion electric car for your own garage. This means personal garages and safe houses could also be something you can purchase and maybe even customize to stand out online.


Free roam has to be available in some form as it provides players with their own playground to do whatever they want in the game. Unfortunately, in Grand Theft Auto IV it was quite boring but this time around I hope this is changed. Everything that you can do in single player except for missions should be available in free roam. Hunting, golf and tennis as well as all other side activities would be fantastic to be able to play online and maybe even random encounters and everything else that makes GTA so great. If these things are not in free roam it makes the city seem dead and uninteresting to explore for hours on end with your friends. Hopefully there will be reasons to just explore the world with other players when you don’t feel like diving into one of the competitive game modes.

Another option for free roam or maybe even it’s own mode would be the idea of a territory based mode. Similar to the end of San Andreas when you had to take over local areas by fighting the opposing gangs, a similar system could work for crews online. Fight and beat a crew to take over their territory but be careful as behind your back another crew could be taking one of your own areas. This could add to the safe house idea as some areas would be more desirable than others and if you wanted the sweetest penthouse online you will have to fight for it.


Something else that has been mentioned is the Online Character Creation System as the Collector’s Edition of the game will feature “Classic GTA characters” to use as your online avatar. This should refer to a deep character customization like that in many games where you can fully create and edit your character including their appearance and attire, something else to spend your money on. The inclusion of classic characters is great and hopefully nearly every character from past games will be available to chose from in some sort of capacity. Having a shootout between Tommy Vercetti, CJ, and Niko Bellic would make things way more fun than just three random pedestrians.

A more ambitious and unrealistic option for GTA Online could be perhaps the inclusion of entirely new areas. It is not called GTA V Online and as we know that the game is set in Los Santos and the surrounding areas, can the same be said about the multiplayer? The glimpse we saw was clearly in Los Santos, but that does not mean it can’t include other areas. It has been a long time goal of Rockstar’s to make the ultimate open world online experience, where you can take a plane and fly to your favorite destination whether it is Vice City, Liberty City, or one of the cities from San Andreas. While this probably won’t happen in GTA V’s multiplayer, don’t be surprised if they take their first step forward in this direction with GTA Online. And with the new consoles that can heavily rely on the cloud, this future for the series could be closer than you think.


Since GTA IV there have been two online offerings from Rockstar in the form of Red Dead Redemption and Max Payne 3. While MP3 was the tightest and most fun multiplayer they have achieved so far, it did suffer from connectivity issues for a while and with GTA V being way more popular I hope a similar episode will be avoided. From their three previous attempts we can see that Rockstar definitely have a specific way of doing online for their single player games and haven't strayed away from the same formula so far. Hopefully they add something new this time around rather than the usual deathmatch offerings. While these games have not reinvented the wheel, they still are very fun to play indeed and they could do a hell of alot worse than follow the same routine again.

So there we have it. Just a few ideas and expectations on what we hope to see when GTA Online is properly shown off in hopefully a matter of days. Of course one of the best parts about Rockstar as a company is that they are completely unpredictable and always somehow manage to surprise and please it’s fans. Whatever GTA Online turns out to be, I know I will be playing it for a very long time indeed. We will have all the details regarding GTA Online as soon as Rockstar reveal it as well as continuing our series of Grand Theft Auto features to keep you occupied until the big day of release.