As the filming for Marc Webb’s upcoming Spider-Man reboot will commence later this month, we have news of several new additions to the cast.

To get the less exciting ones out of the way, The Hollywood Reporter’s Heat Vision Blog tells us that television actor Campbell Scott will step into the role of Peter Parker’s father. Meanwhile, Julianne Nicholson might be playing Parker’s mother. Scott picked up an Emmy bid for his role on the FX drama Damages, and Nicholson held her own against Chris Noth in the spin-off series Law and Order: Criminal Intent, so both should be able do great work and develop strong familial chemistry with Andrew Garfield -- provided they're not just witnessed in flashbacks or something. 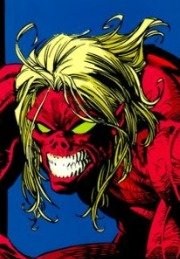 That's why it's interesting that the roles of Parker’s parents are even being cast; they weren’t prevalent in the comics. In fact, this will be the first time that they make a screen appearance. It’s likely that Webb and company will use the characters to lead into Parker’s eventual living with Uncle Ben and Aunt May, who will be played by Martin Sheen and Sally Field.

Now onto the more exciting news. Irrfan Khan of Slumdog Millionaire fame and Annie Parisse (TV’s Rubicon) are in discussion to play Nels Van Adder and his wife, respectively. Information on Adder is scarce in the comics, but Cinematical dug up some info and it turns out that he is an Oscorp Industries employee who becomes Proto-Goblin, pictured to the left, upon taking an offset of the Goblin serum. This would indicate that Norman Osborn might in the film to some capacity, possibly as part of a set-up for the Green Goblin in the next film, not unlike how Christopher Nolan's "Batman" movies waited for the second film to use the most iconic villian, The Joker. If it's a minor bad guy, it probably won’t give Khan much acting to do, which is unfortunate given his great work in “Slumdog.”