Spider-Man Turn Off The Dark – Review

After months of previews and ill omens, Spider-Man has opened on Broadway, and it’s not that bad!  For everything that this show does horribly wrong, it also does something great. Spider-Man: Turn Off The Dark has been reworked over the last few months, and while they didn’t change the silly title, they have revised much of the script, the directing, the music and lyrics.  What’s good about the show comes late in game, and it’s sad that people who flake out during intermission will miss all of the fun.  After a boring first act, and some embarrassingly bad supervillains at the top of the second, Spider-Man eventually swings his way to an amazing finale.

Holding back the first act is that fact that it is yet another re-telling of Spider-Man’s origin, which audiences already know from the movies, cartoons, and comic books.  If it were being re-told well, this wouldn’t be a problem, but Turn Off The Dark does two things that ruin Spidey’s iconic origin tale. 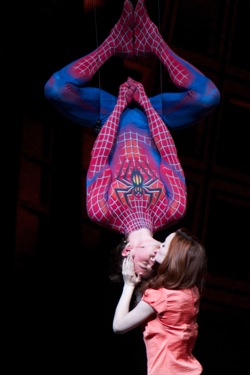 In every other version of this tale, Uncle Ben dies because Peter refuses to stop a criminal who later kills Ben.  Peter is directly responsible his Uncle’s death, and learns that “With Great Power Comes Great Responsibility”.  Here, that wonderful line isn’t even spoken by Uncle Ben (A bit-player paraphrases it), and Ben dies from a random carjacking that is completely unrelated to Peter.

Then there’s Arachne, a character from Greek mythology who has been awkwardly shoehorned into the story. She was obviously heavily edited down from a previous version of the show, and contributes nothing to the story but confusion.  Plus she demands that the audience suspend their disbelief about gods and magic, in a show that already requires the audience to believe in science fiction concepts like super-powered mutations.

The pacing is terrible, the show plods along with way too many subplots, until the Green Goblin (Inevitably) appears at the end of the first act.  When the second act does start, fans of the comic book are in for an infuriating appearance by some Marvel villains.  The Goblin creates six mutant henchmen named after villains from the comic books.  I say “Named after” because these characters aren’t actually based on the characters at all. The backstories are completely re-written, they have no dialog, and might as well be called Henchmen 1 through 6.

Then there’s the new villain created just for this show, Swiss Miss, a robot drag queen with the powers of a Swiss Army knife.  She’s certainly the most ridiculous villain that Spider-Man has ever fought, and I say that in full knowledge that Spidey has battled Stiltman and a walrus guy.  A huge problem here is that the script repeatedly tells us that all of these villains are created by the Green Goblin mutating the DNA of ordinary humans.  Which raises the question, just how does mutant DNA turn a human into a transvestite robot? 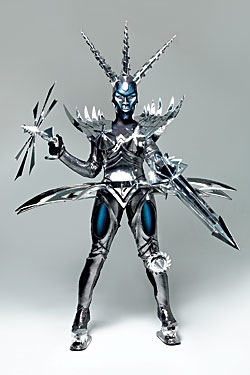 Far too much time is spent with Spidey battling these inconsequential minions before he gets down to fighting his true foe, the Green Goblin.  Here, halfway through the Second Act, the show finally comes together in terms of superheroics.

Unfortunately, it never really works as a musical at all.  The music isn’t bad, but it isn’t noteworthy either.  There’s only one remarkable song, the romantic ballad “If The World Should End” sung by Peter and Mary Jane.  Much hype was put into the fact that it was composed by Bono and The Edge (Now there’s a better name for our robot villain with knife powers).  But being a rock star is not the same as composing musical theater, and they fail to distinguish themselves here.

Visually the show is very striking.  The sets (George Tsypin) are amazing recreations of iconic pieces of New York City for Spidey to swing around in.  The aerial work (Scott Rogers) is incredible; a swarm of talented Stunt-Men swoop out into the audience, battle the Goblin above the crowd’s heads, and swing through the stage firing webs at villains.  The costumes are also great.  Even though I despise Swiss Miss as a character, I have to admit the outfit is one of many impressive achievements for designer Eiko Ishioka.

Directing is a bit of a problem, since the original Director Julie Taymor was dismissed, and this version of the show is credited to Philip William McKinley as “Creative Consultant”.  It’s hard to tell who to blame for specifics, but whoever was responsible for the mutant henchmen screwed up tremendously.

Taymor surely deserves blame for her contributions to the outright terrible book that she co-wrote with Glen Berger.  It was revised by Roberto Aguirre-Sacasa, but it still needs significant editing, with Arachne and the henchmen clearly needing to go.

The cast does what they can with the lackluster material.  Reeve Carney is a charming Spider-Man/Peter Parker, and deserves extra praise for doing much of the aerial work too.  Jennifer Damiano is a sweet Mary Jane, playing the role for all its worth, despite not having many interesting things to do.  T.V Carpio clearly had her role as Arachne slimmed down in the editing phase, but she makes do while dangling from wires, encased in a bug suit and singing unremarkable songs.  Villains always get to do the fun stuff, and Patrick Page makes an amusing yet creepy Green Goblin and Norman Osborn.  Of course he doesn't become the Goblin until Act Two, so he’s left with a couple of mediocre songs in the first half of the show, but really takes off when he does his villain routine with “A Freak Like Me Needs Company”.

I’m as jaded as they come, but when Spider-Man swooped over the audience’s head and landed right in front of me, I can’t deny it was an amazing experience. Despite many missteps along the way, the show should leave audiences feeling satisfied.