Spiderman Swings Down Broadway This Winter

Listen up true-believers!  This Christmas, you’ll finally be able to buy your girlfriend tickets to a Broadway musical that both of you will want to see, because December 21st is opening night for “Spiderman: Turn Off The Dark“.

No, really; this is an actual thing that, in fact, does exist.  They even have a website.  Yes, that’s the real title.  I’m not making this up.

Okay, maybe you and your girlfriend will both hate this show. The project has been snared in a web of production problems for years, it was originally slated to open last winter, and the title sounds like it was written by Todd McFarlane in the mid-nineties when “Dark ‘n’ Edgy” was all the rage. It stars no-one-you’ve-ever-heard-of, and the story will be yet another retelling of Spidey’s iconic origin. 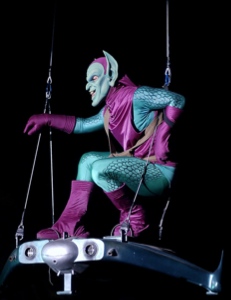 Let’s give it the benefit of the doubt though; Bono and The Edge from U2 did the music, and it’s Directed by Julie Taymor who won a Tony Award for the musical adaptation of “The Lion King”, so there’s a chance this will be worth the ticket price.  For sixty-seven dollars you can have a look at it yourself, or you can get “Premium Tickets” for a mere two-hundred and seventy-five bucks.

Tickets go on sale for American Express cardholders on August 14; everyone else has to wait until September.  Previews star November 14th and opening is December 21st.  Let’s just hope it turns out better than last season’s “Batman! The Musical”