"Where a kid can be a squid."
By: Edward Oliveira | Wii-U Reviews | June 4, 2015
When people say Nintendo never makes any new properties, that they are only the Mario and Zelda guys, they sadly haven’t heard of Dillon’s Rolling Western, Sakura Samurai, Pushmo or any of the other cool new stuff that they have put on the eShop. It’s a bit understandable since they are smaller titles, but with a huge marketing budget and a ton of positive buzz, Splatoon is really hard to miss. And honestly, it shouldn’t be missed because it’s the neatest shooter I’ve played in some time. 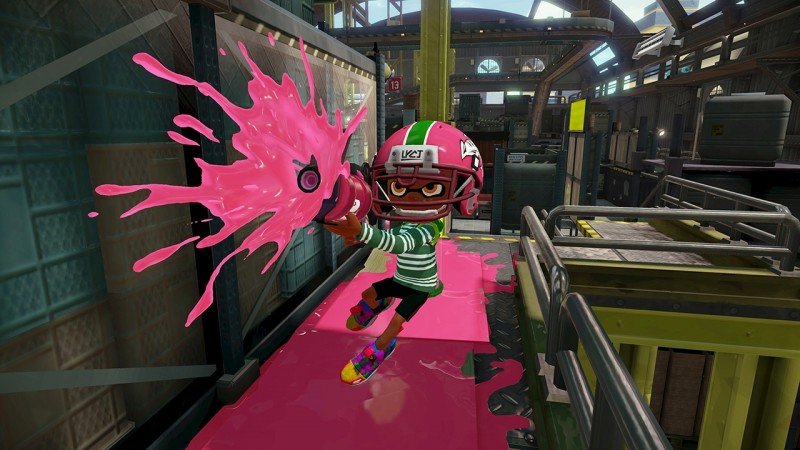 Players start off Splatoon by creating a squid kid called an Inkling. They don’t just look like squids, they can transform into them. At any time with a press of the ZL trigger, you become a squid and gain the ability to swim in the ink of your color. These Inklings, especially the female ones, are some of the coolest character designs with their squid teeth, tentacle hair and bright-multicolored tones. The ability to change their clothes with various trends on top of their cool looks only helps make your Inkling your own.
After the simple male/female, eye color and skin tone options, you are then whisked away to the hub world, Inkopolis, where they join battles, play the campaign, interact with the amiibo, and can spend money won on shoes, hats and shirts that have and can earn passive perks for your Inkling. Once at Inkopolis, you’re told that the special zapfish, which are special fish that power Inkopolis, have been kidnapped my octopus-people/monsters called the Octarians. Since you have all the current modes unlocked from the beginning, you can go after those zapfish in the twenty-seven staged campaign. 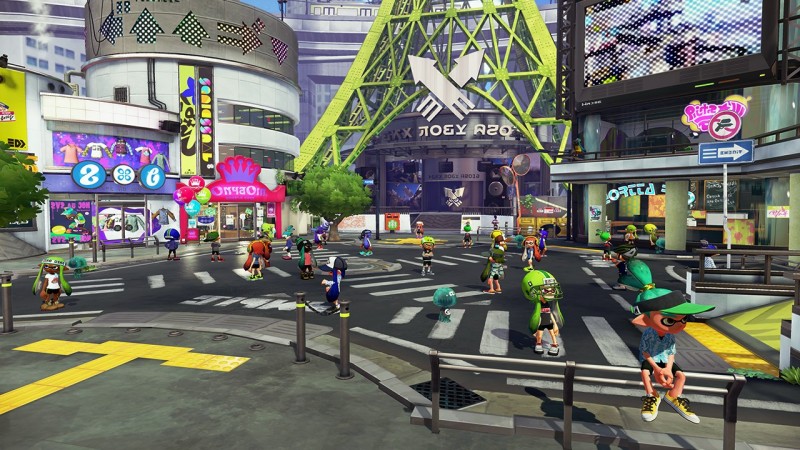 The campaign reminds me of Super Mario Galaxy with the stages chopped up with their only connection being you blasting off to them, but the gameplay takes the shooter motif and train you to platform with them. You’ll be spraying walls to swim up and taking on foes in both traditional (just shooting them) and non-traditional (like getting them stuck in your paint to lower their defenses) ways. Unlike Galaxy however, all the stages’ art styles in Splatoon feel very same-y and some objectives repeat, like when you go through every multiplayer map KOing Octolings (Octopus version of the Inklings) or dodging Inkstrikes.
Each stage has a hidden scroll in each stage. It’s worth mentioning because they are pretty fun to hunt down and the rewards are some cool artwork that can be pretty trippy and explores the dark origins of Splatoon. There are Octarian Adam and Eve pics, Egyptian art that was modified with Inklings or other pop or historic art that was squidified. The bosses instead drop blueprints for extra guns for multiplayer, so there are alternate objectives to the campaign. 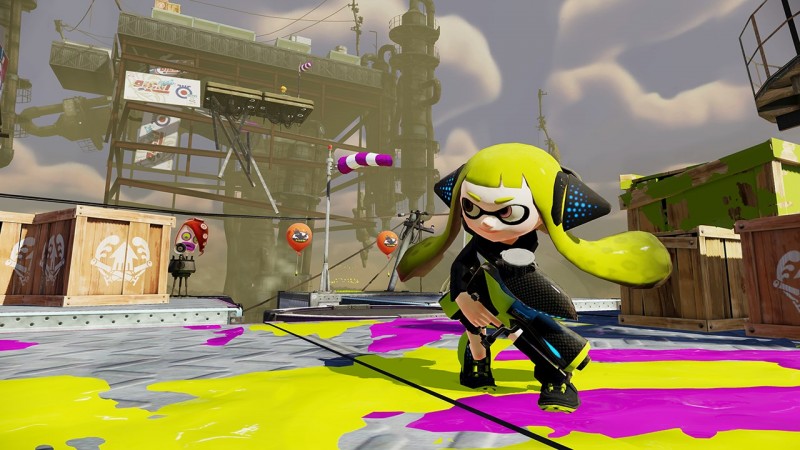 Once you clear a particular stage, you can redo it with a different weapon with an Inkling amiibo, or under different goals with the Squid amiibo. The unlock exclusive gear like the samurai armor or schoolgirl outfit once you beat a certain amount of stages followed by the campaign’s bosses. The last thing you can unlock with each of the three amiibo figures is a minigame that you can play when the game’s matchmaking, which baffles me that games like Halo and Call of Duty do not have something like this to kill the hours that add up waiting for matches to start up. This functionality is pretty cool and actually adds on to the core experience, unlike many other amiibo-compatible games.
While there are some regular spray and go stages, some introduce unique variables that spice up the gameplay. For example you get sponge platforms that grow when filled with your ink, and when the game feels you understand the concept, it trains you in platforming and combat with them, like when they shrink when enemies spray them or that you need to spray a few to gain the ability to squid jump to the next. This concept applies to the Mario-esque bosses, which are the traditional “hit them three times to die” manner; with one exception being the off-the-ball crazy final boss that applies literally everything you learned to beat it. 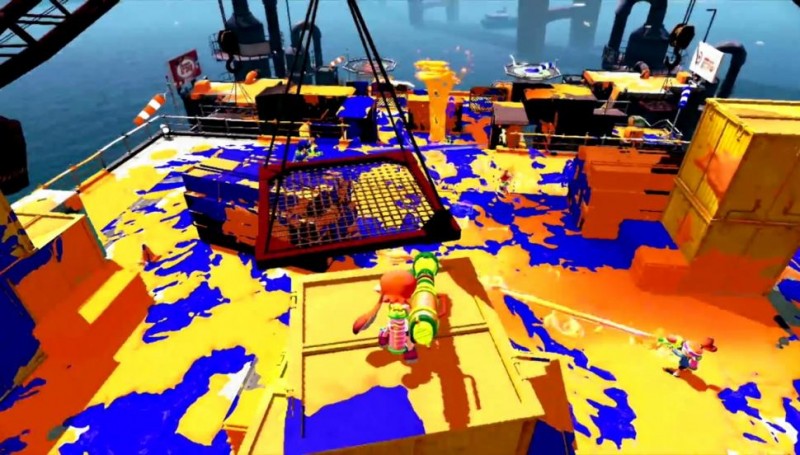 The concept of Splatoon’s main draw, it’s multiplayer, is pretty simple: you play online in 4 vs. 4 “Turf Wars” to see who can cover the map in the most ink. Unlike most shooters, killing the other team isn’t a focus, though it could help, and its weapons are suited to help that cause. Paint rollers, Super Soaker-like water guns, snipers that charge and shoot paint, and more are your arsenal alongside the rest of your loadout like paint balloons and grenades for a sub weapon and locators and kraken transformation for your ability. After three minutes, a fat cat named Judd tallies the percentage of the map covered in your team’s ink and declared the winner. It’s really that simple and a blast.
The four-on-four matches can go two ways, either they get incredibly close and you’re clenching your teeth to see if you squeaked by a win, or they can go incredibly one sided with the other team nailing seventy-something percent by the end. Many matches are won with the efforts of the team in the last minute with a last second rush through the opponents so standing still in never an option. Though more often than I like I see a player get dropped from the match, making the next three minutes a 3 vs. 4 slaughter. Luckily, any bad matches are done in a mere three minutes, so you’re never feel like it’s a waste of time.
The game controls pretty well on the GamePad with the exception of constantly looking at it to see the map and the ability to blast yourself to an ally’s position. I do wish there was a Pro Controller option not because its more comfy, but because people like me might break their GamePad when they get into a losing streak (like yours truly), and a Pro Controller is just cheaper to replace. The game defaults to a motion-based control scheme that replaces the Y-axis of the right stick with the gyroscope, and though it works well to those who bother to practice with it, there is an option to turn it off for those who want a traditional setup. 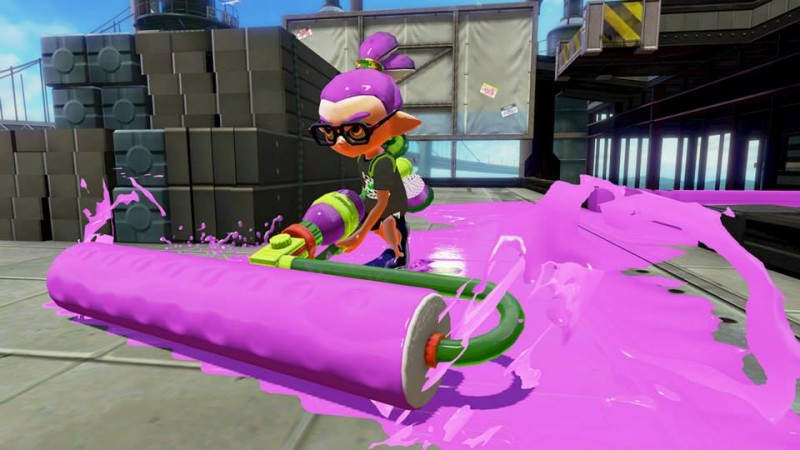 We waited until a week after launch to finalize this review because we wanted to see if the game had legs to survive where similarly focused games like Plants vs. Zombies: Garden Warfare or Titanfall failed. Nintendo, possibly seeing the downward trend of popularity games like those had, decided to slash content at launch to expand as free DLC throughout the summer. By the end of the week, I beat the campaign, did all of the amiibo stages for the girl Inkling amiibo, and played until level 14 (where the current cap is 20), and the game is still a ton of fun though I can predict that this is going to get stale soon. Nintendo pounced off content by adding a sixth map, the replica of the 1985 NES Zapper as a gun, and added the ranked mode that is unlocked at level 10. We’re still promised many more stages and weapons, and hopefully level cap increases and online modes.
So the ranked battles so far are just a modified version of King of the Hill, where players must soak a sector of the map and keep control of it for a certain amount of time. All the stages for some dumb reason have one hill to control while the skate park has two, so after playing the skate park I feel that the mode is lacking in the other stages. Otherwise the mode is okay, but it doesn’t feel as fun because it makes it just a regular shooter, where KOs really matter so you can control the hill. It’s pretty hardcore too since a win scores you 20 points and a loss deducts 10, so in a few quick matches, you can go nowhere.
Because the ranked battles are that hardcore, I do wish there was voice chat because teamwork really matters and other than a few emotes, there’s no communication between players. Otherwise I’m actually happy there’s no voice chat (with the exception of talking with real life friends for kicks and giggles), because people like me exist where I’d give people a piece of my mind; and a happy, upbeat game like this doesn’t deserve it.
We also waited a week to see if Nintendo’s servers can handle a game of this magnitude, and we’re happy to say that there have been very little issues. Lag is kept at a minimum and the quick matches mean quick start-ups for the next one. There’s been a minor maintenance period that added the new content and a ton of happy Inklings from Japan to Europe to right next door playing match after match. 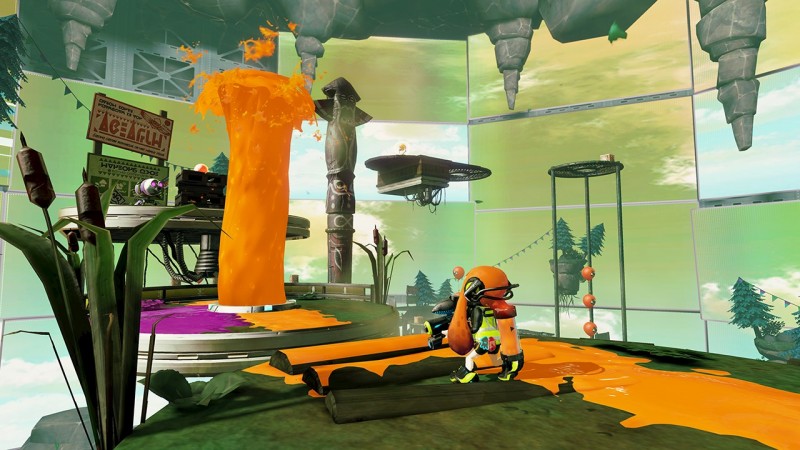 Oh, there’s a 1-on-1 mode, where one player uses a Pro Controller and TV, and one uses the GamePad and its screen, but all you do is pop balloons in a time limit; so forgive me if I pass over this forgettable addition because Nintendo did exactly that. If they did anything that was for local multiplayer, it should have been LAN/WLAN support so this game could be played in tourneys or conventions.
I have to commend Nintendo for creating a game no one thought they could do correctly. I’m in love with what they have going for the game (and the young IP as a whole), though there’s a lot of room to improve. There’s a bit on online standard they still need to adhere to, like the ability to host matches, but as a first start, what we got now is extremely polished, from the graphics to the connection quality to the gameplay. But for now, Splatoon is the freshest, coolest, cutest and most unique thing going for the Wii U. And honestly, it’s what the system needed.
Rating
8.5
Pros