"Squid Girl DLC!"
By: Edward Oliveira | Wii-U Features | August 6, 2015
Last night, Nintendo launched the 2.0.0 update to Splatoon, fleshing out a ton of stuff in the acclaimed third-person shooter. New modes, weapons and more are now available for use in game alongside some changes to the current formula.
Weapons 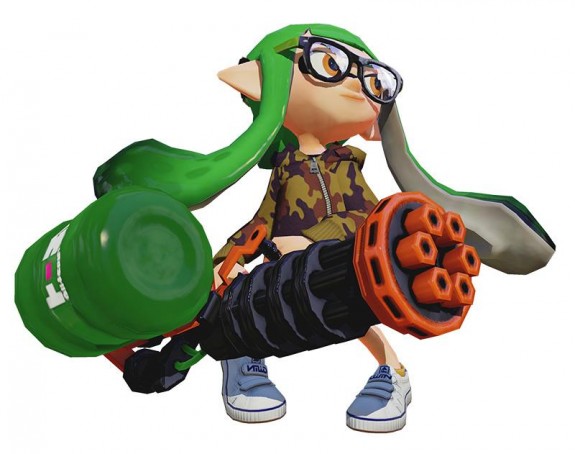 First up there are two new weapons in the game: the mini gun Splatling and the bucket Slosher. The Splatling gun is actually a part of the charger line of weapons, as you need to charge it to shoot. Unlike the normal sniping weapons, you can charge this one twice to double the about of ink you’re shooting. The gun’s got some great range, power and rate of fire, but it’s slow to walk with, it takes up a ton of ink and it doesn’t cover a ton of land. The sub weapon is the Splash Wall so it can protect you if you need to move or charge and it has the Inkstrike as its special. The problem is the same with other chargers, even if you kill off the other team over and over, you’re still not doing your part inking the floors. It’s amazing in ranked battles though as it can clear enemies from important areas. 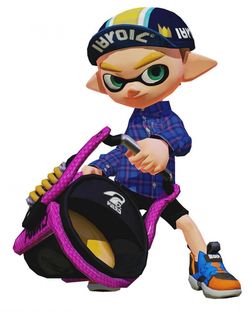 The Slosher however does the job spreading ink since it’s pretty much throwing a bucket of ink everywhere. It’s one of the best weapons at that and it has you filling your special bar for the Inkstrike in no time flat. One good Slosher in a team can make a good difference, but too many in a team can be a detriment. The Slosher isn’t the best offensive weapon as the ink you’re spreading arcs pretty high and enemies can dodge it, but you can throw ink over walls to KO Inklings behind it. You have the Burst Bomb water balloons as a sub, but they are not at all powerful enough to KO someone chasing you. Too many Sloshers in a team and you’ll be backed right to the spawn point.
Stage Alterations 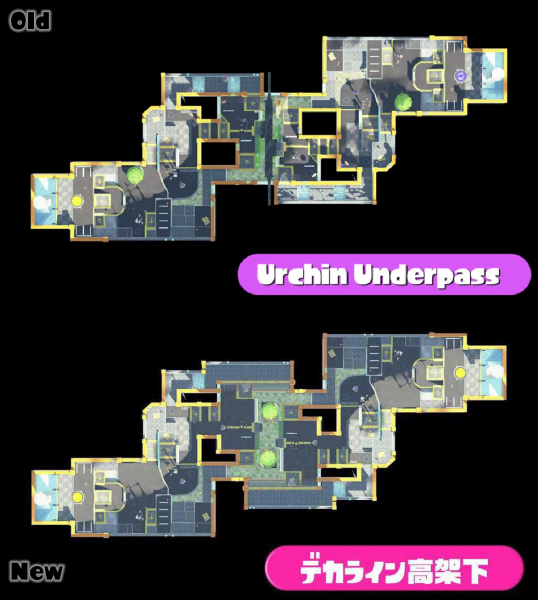 When the update hit, one of the first stages in rotation was Urchin Underpass, because it received a drastic redesign. The middle is MUCH wider, the hallways have been plumped up and it helped turn one of the most constrictive maps to one of the most open ones. The devs smartly placed things to help balance things out, such as glass floors near the ledges to prevent snipers from camping and moved the trees to the center to allow for more cover. Nintendo also stated that Arowana Mall will also be updated, though we don’t know what.
They also added a few more music tracks to the rotation to refresh the battles.
EXP Change
Leveling up in Splatoon before level 20 was based on your score for the match. What this means is that better players leveled faster because of their involvement in the match. With the new update, they changed it to slow the progression down, so that players didn’t max to 50 so quickly. Now it works like Splatfest, where players only earn a set amount of EXP for getting 400 points in the match and points for winning. Though I feel that 400 points is too low, and kind of allows everyone to get something regardless of skill.
Ranked battles increased from A+ to S and S+.
New Gear 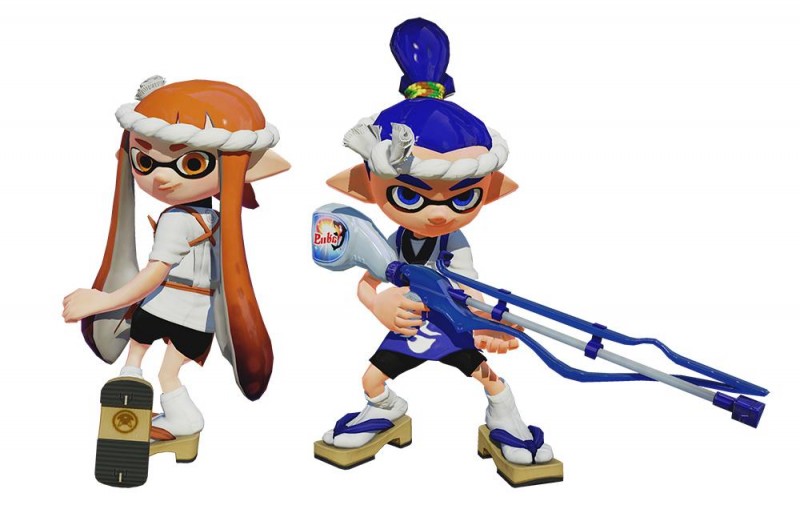 According to Nintendo, over 40 new pieces of gear are now available to purchase. Unless you see them from other players and order them through Spike, The only way to see them is when they rotate stock every midnight EST. This includes leather jackets, sushi chef costumes, night vision goggles and more. Also available is a cross promotion between Splatoon and the very hard-to-hate Squid Girl anime. The outfit for the main character, Ika Musume, is available for players to snag, and it's adorable. Nintendo even added a new sky blue Inkling hair color to match Ika’s. Hopefully this mean the second season of the anime gets dubbed and localized. 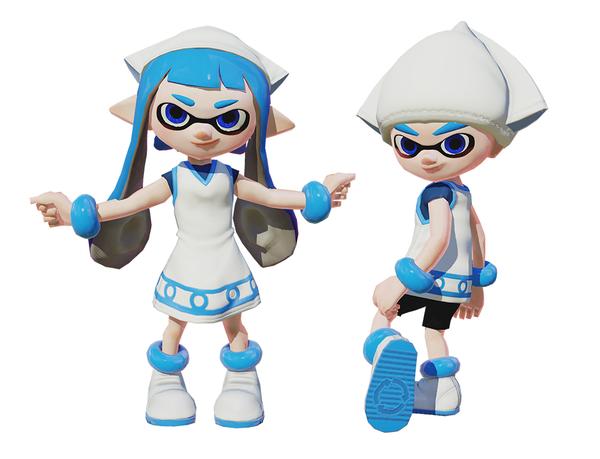 You can also speak to Judd when you hit certain levels, and he’ll reward you with Cuttlegear that the Octolings use.
New Matchmaking Modes
Now when you hit up the lobby, Splatoon looks to be a real shooter thanks to two added modes: Squad and Private Battles. Squad Modes lets you team with someone from your friends list to team two other friends and face off another duo of duos in Ranked matches. Private allows you and up to seven others to do whatever you want, and you can add a password if you want.
Web App
Also released today is a new Splatoon web app for the game. You can see your friends’ loadout and weapon point tallies, send messages to them and see the stage rotation. It’s all in Japanese right now, but hopefully we’ll see it soon over here.
To celebrate this, there will be a Splatfest this Saturday. America’s is Marshmallows vs. Hot Dogs for roasting, while Europe has North Pole vs. South Pole for some reason. There’s also a Splatoon contest going on in the Wii U’s Art Academy. The update is free and took very little time to install. You may need to reboot the Wii U if the game won’t connect online after the update.
Get Splatting!