Another week, another round of the most exciting movie contest on the web! Boxing movies: we got `em, you rank `em. It’s the next best thing to being punched in the head yourself. Ding Ding, onto Round 2.

First off, let's quickly recap for those of you new to the tournament. In the Sports Movie Madness tournament, there are seven sports and one mega-category of miscellaneous sports, so eight regions total. This is the Boxing Region. Below are the four boxing films remaining after the first round of voting. There are two matchups based on our original seeds, and your job is to pick which movie you deem worthy of winning each matchup. Simply enter a comment by Sunday at 5:00 pm with the two movies you think should win each matchup (once again, not any two movies, but one of the two movies going up against each other, so no voting for Rocky  and The Fighter  only one or the other) and your votes count! After a winner is determined in each region, those films will face off against one another until we have a winner!

Just like if Mike Tyson went head to head against Betty White, there were no upsets in round one. Despite Cinderella Man taking an early 3-1 lead in votes, Rocky handily won in the end and The Fighter, though a new contender to the genre, continued to dance on its praise and awards success defeating Denzel Washington and his pseudo-boxing flick The Hurricane. Both these films and the other duo of champs still have a ways to go to ultimate glory, so read on and leave a comment for each new matchup.

It’s now the classic versus the new kid on the block, starting with the number one seed Rocky. The other contenders will be hard pressed to score a KO on this beloved Best Picture winner and its iconic character of Rocky Balboa in the lead. The enduring success of the entire franchise is the true testament to the love people have for this film and the storyline that while defying the genre’s clichés, still stands as an inspirational piece of dramatic filmmaking.

Even though The Hurricane had years to build a fanbase, it was no match for last year’s The Fighter; the proud winner of two Oscars for Christian Bale and Mellissa Leo in supporting roles. It may be partly residual buzz and the fact that the film is fresh in people’s minds, but I’ve yet to hear negative words about this drama as conventional as its roots may be. It will certainly face an uphill battle in this matchup. 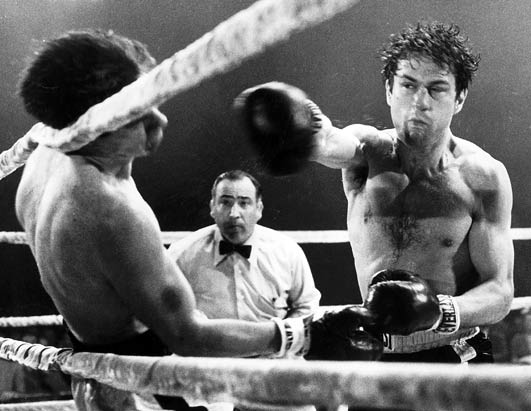 Two tragic figures from two iconic directors enter the ring in this contest, beginning with Million Dollar Baby, another Best Picture winner and another classic of the genre. Tight seeds here with Clint Eastwood’s uniquely feminine take on the genre and Scorsese’s still praised gritty drama and both are certainly deserving of their inflated standings. Million Dollar Baby really has that gut-wrenching punch we all hate to love and it is likely that aspect, coupled with the many strong performances, which gives this film its edge.

A hard film to watch in many parts and one not usually lingering in the minds of the average person Raging Bull shreds its potential hindrance and excels past the norm of boxing films in a big way. This film is among lists of the greatest cinematic accomplishments of all time and not simply boxing movies specifically; obviously that says more than enough to give Raging Bull some weight and never count this black and white biopic down and out.