The Zamboni has come and gone and the ice is flawless, so you know what that means: time for the second period to begin in Sports Movie Madness. The results are in and four newly matched challengers have laced up. Grab that foam finger and have your say in Round 2!

First off, let's quickly recap for those of you new to the tournament. In the Sports Movie Madness tournament, there are seven sports and one mega-category of miscellaneous sports, so eight regions total. This is the Hockey Region. Below are the four hockey films remaining after the first round of voting. There are two matchups based on our original seeds, and your job is to pick which movie you deem worthy of winning each matchup. Simply enter a comment by Sunday at 5:00 pm with the two movies you think should win each matchup (once again, not any two movies, but one of the two movies going up against each other, so no voting for The Mighty Ducks and Slap Shot, only one or the other) and your votes count! After a winner is determined in each region, those films will face off against one another until we have a winner!

Like a matchup between the Edmonton Oilers and the Vancouver Canucks, there were to be no surprises in the winners of our first round. Pee-wee favorite The Mighty Ducks swept the equally deserving but little scene French film Les Boys. So was the same fate for another Quebec product, The Rocket, and the non-hockey, hockey flick, Sudden Death. This next matchup will be the real test for what are classics of this genre and these films' inherently unique styles and themes should make for a great game. To vote, look at the matchups below and leave a comment at the end. There’s the buzzer, what are you waiting for? 1 The Mighty Ducks vs. 4 Slap Shot

An interesting matchup develops here with the (mostly) innocent versus the foul-mouthed, beginning with The Mighty Ducks. There are clearly fond memories abound regarding this underdog tale of a failing pee-wee team excelling over the atypical guidance of their coach. This film remains the kind of wholesome but funny sports flick that gets passed down through generations and seems to strike a chord every time.

Certainly not for kids, Slap Shot is a 70`s gem that has lost little of its power over the decades and capably pokes fun at the violence of the sport while fully embracing hockey’s spirit and energy. Paul Newman is a lasting star and a great talent in any genre and he makes the most of his role as Reggie Dunlop and clearly pushes this genre entry into the oh-so important memorable realm (or dare I say classic). 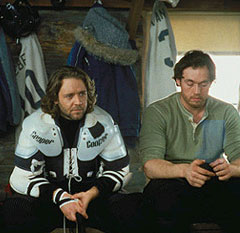 Never underestimate the power of a straight-shooting, inspirational sports tale based on real events; Miracle is one of those entries that substantiate such a statement and is able to energize and inspire in unison. Strong central performances serve as the backbone of this West versus East clash and even though I may be North of the border, I can appreciate the appeal of a patriotic offering.

Certainly not the fiery, fist-pump inspiring film that Miracle is, Mystery, does however use its more dramatic and somber tone to palatable effect and twists sports movie conventions enough to become something more. A younger Russell Crowe carries with him a lot of mainstream appeal as well and if past tabloid headlines have told us anything, we can certainly believe he could hold his own in a hockey scrap or two.