By: | Movie Features | March 25, 2011
Welcome back to Player Affinity's Sports Movie Madness! Last week, we held the opening round of voting to determine the best other sport movie ever in a 16-movie field, the biggest region of the tournament. You voted, and we've got your results, as well as matchups for Round 2 as we near which non-major sport film will represent against the best of the other sports movies.

But first, let's recap for those of you new to the tournament. In the Sports Movie Madness tournament, there are seven sports and one mega-category of miscellaneous sports, so eight regions total. This is the Other Sports Region. Below are the eight films remaining after the first round of voting. There are four matchups based on our original seedings, and your job is to pick which movie you deem worthy of winning each of the four matchups. Simply enter a comment by Sunday at 5:00 pm with the two movies you think should win each matchup (once again, not any two movies, but one of the two movies going up against each other, so no voting for Caddyshack and Kingpin, only one or the other) and your votes count! After a winner is determined in each region, those films will face off against one another until we have a winner!

No upsets here, kind of surprising for a field of 16, and it was not even close. The closest battles were 5-3 margins of victory with Kingpin ahead of Point Break and Seabiscuit over Tin Cup in what could have been the proverbia 12 def. 5 upset. The only films with no votes were The Foot Fist Way and Wimbledon, not all that surprising. However, all the top seeds advancing means you have your work cut out for you this weekend.

There have been a surprising amount of golf films, especially considering that the sport is hard to show on film with any semblance of suspense. Hence, we have Caddyshack, an irreverent take on the sport that’s hardly about the sport but all about the culture. From Rodney Dangerfield’s terrific supporting performance to Carl Spackler and the gopher to a Baby Ruth in the pool, this is a coming-of-age story and wacky comedy that’s simply never been duplicated.

After Dumb and Dumber, the Farrelly Brothers took on one of cinemas few bowling films. If you don’t count The Big Lebowski, there’s no question that Kingpin is the best film about the sport. Woody Harrelson stars as a big bowling prospect who messes with self-absorbed bowling star Ernie McCracken (Bill Murray) and gets his winning hand cut off. He then discovers an Amish prospect (Randy Quaid) whom he wants to coach to glory. The Farrellys gross and outrageous humor reigns supreme in this hilarious sports entry. 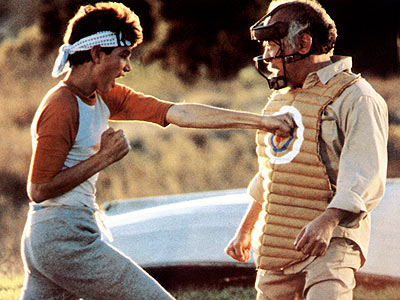 You’re the best around: The Karate Kid might be most famous for making the sports montage a genre staple, but it could also be wax-on, wax-off. For 1984, “Karate Kid” pre-dates the wave of ‘90s youth sports films and no doubt inspired them even if its more serious than most kid-based sports films. No karate movie could ever be done again without drawing a comparison to this film starring Ralph Macchio and Pat Morita as a bullied student and his karate mentor who learn that the deeper significance of the sport in working together.

Seabiscuit was about as highly touted of a movie as there was when it came out in the summer of 2003. Tobey Maguire, hot off his first turn as Spider-Man, plays the jockey, Jeff Bridges the owner and Chris Cooper the ace trainer, all of whom are battling their own odds in turning this horse from a lame duck with potential to a horse capable of racing War Admiral, the best in the sport at the time. Another successful combination of American period setting with sports drama.

Happy Gilmore is the second Adam Sandler film to make it into March Movie Madness and it was one of his first hits. To me, golf is one of the most boring sports ever invented, so it needed to be made more exciting. Sandler plays an ex-hockey player with anger management problems who converts his mighty slap shot for golf purposes. Made with Sandler’s usual over-the-top style, many critics and film fans consider Happy Gilmore as one of Sandler’s better films.

Will Ferrell is not the only member of the Frat Pack to attempt a sports movie; Vince Vaughn and Ben Stiller made Dodgeball: A True Underdog Story, bring the game that has traumatized generations of American schoolchildren to a whole new level. The film was a hilarious send up of sports movies, making fun of the formula and clichés and filled with verbal gags and psychical humour. But the filmmakers had to settle for a typical Hollywood ending to please test audiences. Remember grab life by the balls! 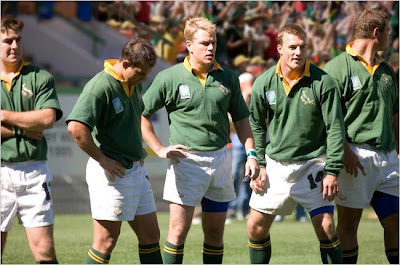 Based on a book by John Carlin, Invictus is a story about how a sport played an important part in politics and united a nation. Set in post-Apartheid South Africa, Invictus tells how Nelson Mandela used the 1995 Rugby World Cup to unite white and black people by giving them a national team to support. The sports scenes are great, whether watching in the stands or in the heart of the action and it is a very interesting political and social story about South Africa trying to heal its wounds. There are great performances from Morgan Freeman and Matt Damon in a film that is inspiring and uplifting.

Disney has made a lot of sports films and Cool Runnings is one of their most famous. Loosely based on the true story about Jamaica sending a bobsled team to the 1988 Calgary Winter Olympics, Cool Runnings tells (in comedic fashion) how three Jamaican sprinters who failed to make that nation’s Olympics team become the first Caribbean nation to compete in the Winter Olympics. Cool Runnings shows the team’s trials and tribulations of training and competing in the Olympics.