DLC in games can range from a brilliant add on to something completely unneeded, which can even occasionally tarnish a bit of the original games reputation. If you don’t believe me, just ask Mass Effect or Assassins Creed 2. In most of those cases, the DLC is released mere months or even weeks after the original’s release which seemingly means the developer was crafting the DLC while also doing some work on the full game, and that’s one warning sign that the upcoming DLC will not be up to snuff with its full game brethren. Stacking, the glorious Xbox Live Arcade Game released back in early February, has received its first piece of DLC, titled The Lost Hobo King. Can The Lost Hobo King avoid all the previous demerits I mentioned about early DLC? Or will it be just another forgotten piece of content left for dead on the Xbox Live Marketplace?

If you’ve played Stacking, then when you hear “The Lost Hobo King,” you most likely think the story is about Levi, your kind hobo friend from Stacking, somehow becoming the king of hobos. You would be half right. The story revolves around Levi asking tiny Charlie Blackmore to come help him in his quest to awake the three major blacksmiths in Camelfoot so that they can then reforge the hobo crown and then eventually crown a new hobo king. The story is as ridiculous and silly as you’d expect from Double Fine though apart from the opening and final cut scene, there isn’t a lot of story to speak of. Which can be kind of a bummer as I would have loved to interact more with Levi. For what it is though, the story is fine and a nice way to progress you through The Lost Hobo King. 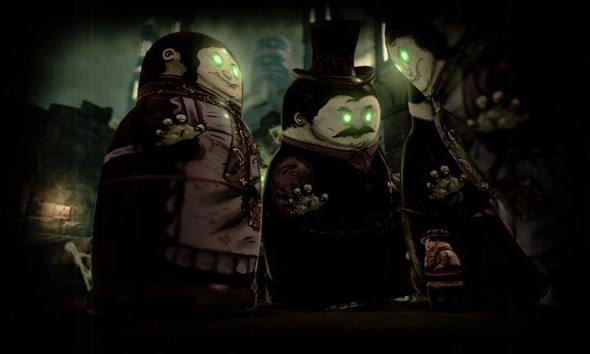 The humor, as you can probably tell from the story synopsis, is still well in tact from the original game. The way you solve certain puzzles can deliver a few chuckles and most of the new unique characters located in the Hobo King are just a blast to play with.

The puzzles themselves are quite interesting and just as good as the originals, if not a bit better. There are only three to be found in Stacking but trying to find every possible solution to the puzzles (12 in all) can take a fair amount of time. This results in Hobo King’s biggest downfall, its length. If you blast through Hobo King without finding all the solutions to the puzzles, you can complete it in around thirty minutes. Finding all solutions to the puzzles may take you an hour and a half, and then finding all hidden items in Hobo King may take you two hours.

Apart from the length, The Lost Hobo King is a fine piece of DLC. It brings to the table new puzzles, more witty dialogue, a beautifully designed new island, and most importantly, more Stacking. Everything you loved in Stacking is back and although it isn’t around for a while, its five dollar price tag makes The Lost Hobo King a must buy for anyone that wants to stack into some more matryoshka dolls.