Following Yar’s Revenge and Haunted House comes another Atari 2600 reboot.  The original Star Raiders can be attributed to inspiring the genre in the first person viewpoint and Atari have charged Incinerator Studios with paying tribute to the 1979 classic and creating an all-new space combat simulator worthy of the name and the ever-increasing list of good games on XBLA and PSN.

Perhaps paying homage to older times, the story is about as cliché as they come.  You’re part of a team from the Star Academy who have trained to take on the evil Zylons in a bid to stop them from enslaving humanity.  It’s all very cheesy and is told with the use of text boxes and voice narration over hand-drawn, mostly static cut-scenes (which are also very cheesy.)  I’ve never been a fan of cinematics like this but when you take into the account the in-game graphics, which are good and the relatively low price, you can kind of see what they were going for i.e. saving money. 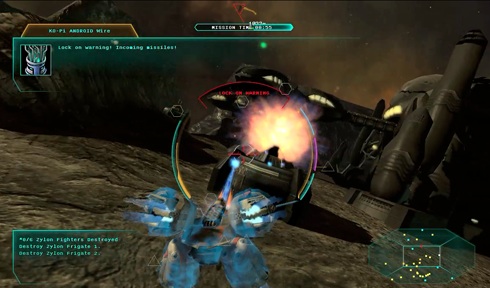 Further elaboration on the narrative is difficult because apart from pushing back the Zylons numerous times and eventually finding the way to defeat them, there is really not much else to say.  Your compatriot Star Raiders add padding by having their own back-stories and agendas, but it is too cringe-worthy to take seriously.  Besides, one of them is called Thad… and who wants to hear more about Thad? No one.

The game’s formula is thankfully more solid, and the core mechanics that surround it work well, although putting them into practice is a bit confusing.  Movement and attacks have an arcade feel to them and handle well for a game of this caliber, with only some things like pivoting and stopping seeming a bit out of sorts.  Your craft has three attack modes, which you cycle through at will, choosing the correct one for each situation.  You could try and claim this adds a tactical element to the gameplay; but it is too apparent which one to use and when.  Turret mode is used to take down stationary targets and makes you very slow and powerful, Assault gives you more speed with a laser gun.  Attack mode is basically “Top Gun mode” were you have the ability to deal with incoming dog fights and high speed chases. 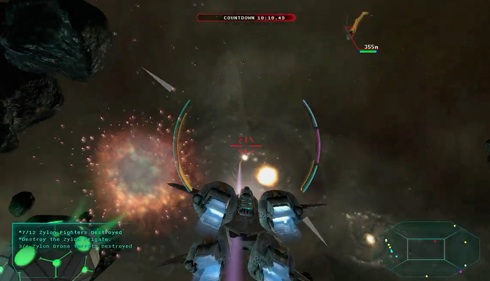 Incinerator tried to create the three modes in conjunction with what you do in the game.  But the problem is that apart from some poorly conceived filler, there are only really two things to do on Star Raiders: defeat small space ships and defeat bigger space ships.  The confusion comes with the switching between the modes.  Each one has its own button layout and when changing at pace, it can be hard to adjust to the correct one properly at the right time.  They even change the analogue stick functions and alter the maneuvering capabilities of the ship.  It feels like the controls have been over-cooked and that a two-mode system could have been adopted to be just as affective.

The menu screens seem needlessly hectic and are accessed on completion of each mission to progress through the game via use of the galactic map.  Upgrading equipment for your ship can also be found in these screens, along with about a thousand other things.  The upgrade system, by the way, is rendered somewhat pointless due to the fact enemies don’t seem to get harder as the game goes on and dying is not penalized.  Shield upgrades don’t mean much when you may as well be invincible.  It’s fair to assume that along with the entire game, the menu was designed solely with the P.C. version in-mind, as navigating through the many controls, links and information tabs is overly cumbersome with a controller. 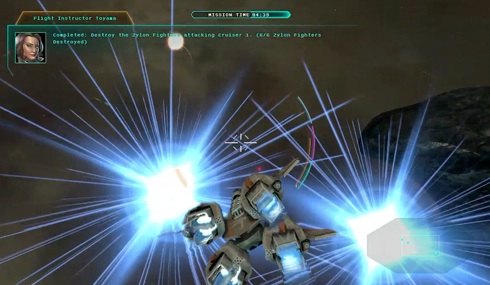 This console port is not the only afterthought however, as regardless of what platform you play it on, the recurring missions will get stale fast and the art design lacks imagination; with the oddities of space missing and a drab overlay present throughout.  The sound design is also a little underwhelming as you won’t hear much in the way of cool weapon noises or bass-filled explosions and the minimal trance music (barring some of the breakdowns) doesn’t add much.  Multiplayer has taken a hit as well, as despite originally saying otherwise, there is none.

Overall, Star Raiders is left wanting in a lot of departments, and the one that could of saved it was scrapped i.e. multiplayer.  If you are into these sorts of games then it could maybe be a justifiable purchase as there aren’t many of them about just now.  But be warned: the plot is terrible, the characters are ridiculous and it’s very repetitive…  Maybe Atari will do a better job with the upcoming Warlords or Centipede.