By: Jim Bush | Comic Reviews | June 13, 2014
The latest arc of Brian Wood’s Star Wars series for Dark Horse Comics draws to a close in issue #18, wrapping up the chapter spent on the world of Arrochar. While the close of the story is solid, the Arrochar story arc as a whole was far less engaging than the previous directions that Wood took the Rebels and the Imperial Empire in this series. The premise had potential – to what lengths will the Rebels go to secure a needed base to continue their fight? However, the payoff, with Leia Organa getting engaged to an uninteresting and unlikable prince in exchange for the use of the home world, didn’t really live up to the promise of seeing another side of the Rebels. 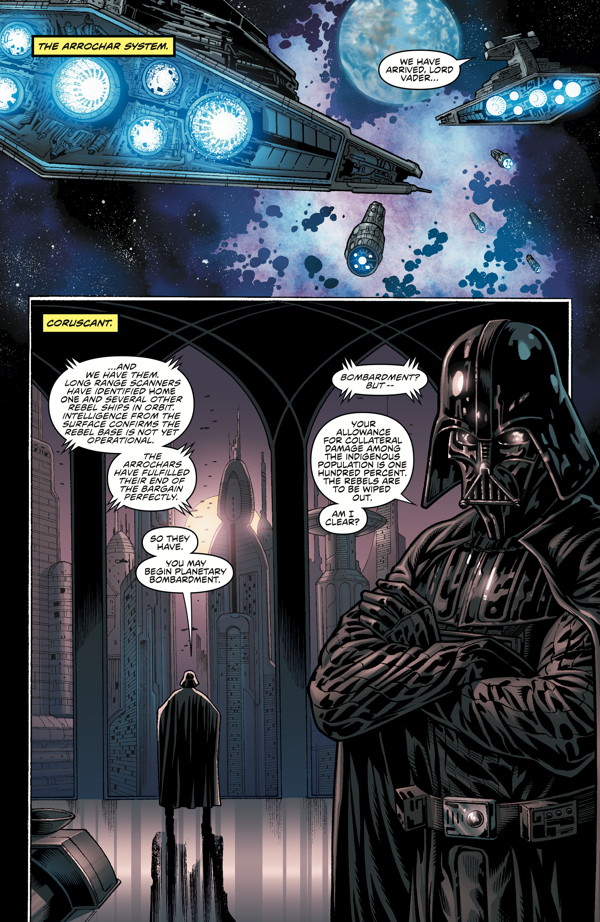 At the close of Star Wars #17, the Empire was about to descend on Arrochar after the royal family betrayed the Rebels in exchange for admission to the Empire. However, Vader makes clear at the beginning of this issue what was pretty transparent in the last issue: the Empire is using the Arrocharians and will not hesitate to destroy whatever is necessary of their world and people to wipe out the Rebels. Since this series takes place between Star Wars Episode IV and V, we know none of the major franchise characters are in real danger. There also isn’t really any particular tension in their escape from the Arrochar royal castle. The only real fight of the issue is between Prince Kaspar and his advisor. The General reveals himself to be rather wicked and Kaspar kills him. This somewhat redeems him, but really I found his character too bland to like or hate. Additionally, he seemed particularly dense about obvious things.   There is a small concession to the problem I mentioned when the idea of a marriage appeared at the start of this arc. Even if it never happened, why didn’t Leia ever mention being engaged later in the Star Wars franchise? At the end of Star Wars #18, she says that she feels bad for Kaspar, who has lost his family, much of his world, and (probably) the trust of his people. The implication is that this event upsets her so much that she won’t want to speak of it again. While that’s somewhat deft, I don’t understand why Leia has so much sympathy for Kaspar. Even if he didn’t understand the Empire’s real motives, he still was aware that he was about to betray the Rebels, including Leia. To me, despite his last-minute change of heart, Kaspar got what he deserved. 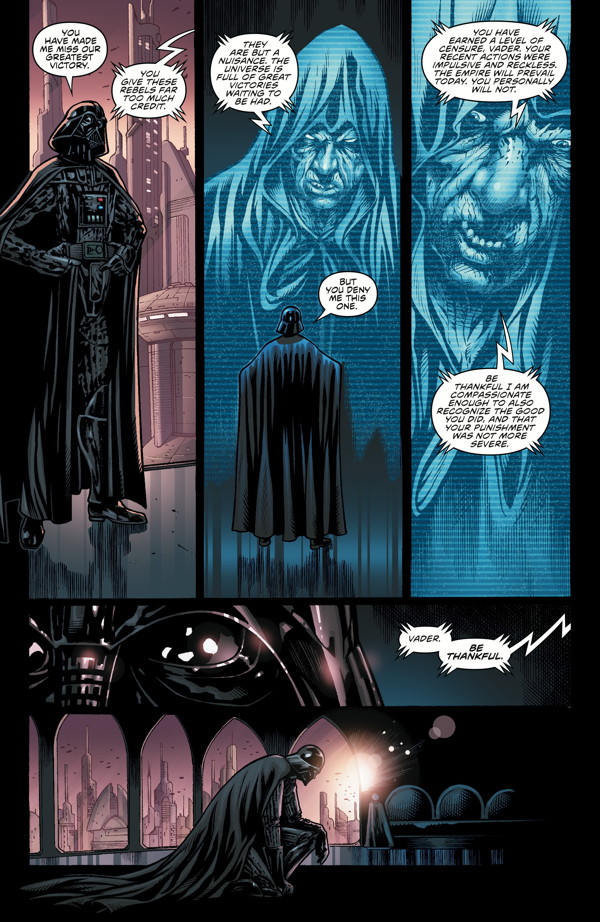 The main strength of this issue was seeing all of the main characters on stage again. The absence of Darth Vader has been a particularly large hole during this recent story, and the energy that’s generated when he shows up at the beginning of the issue, bickering with his “boss,” Emperor Palpatine (talk about a micromanager!), shows that his presence has been missed. Likewise, Luke has stopped being whiney, Han stopped chillaxing, and Chewbacca stopped being in the background. They all are central the fight to get out of Arrochar, which is fun. Their exit is surprisingly easy, thanks to Mon Montha, who has been developing ion cannons in secret on Arrochar. She is another character who hasn’t received enough focus lately.   Stephane Crety gets more to do in his illustration in issue #18. The battle scenes give him a chance to show some destruction and chaos. There are even space firefights. His touch, combined with the inks of Julien Hugonnard-Bert and the colors of Gabe Eltaeb, give the issue a bright and energetic look. It’s not exactly realistic, but it is a nice contrast to the art on so many comic books, which strives for grizzly violence and muted colors. Plus, Crety makes a cool choice in what he doesn’t show during a scene where Mon Montha single-handedly shoots down three soldiers coming for her and Leia. We just see her standing over the bodies with a smoking gun, being a boss. 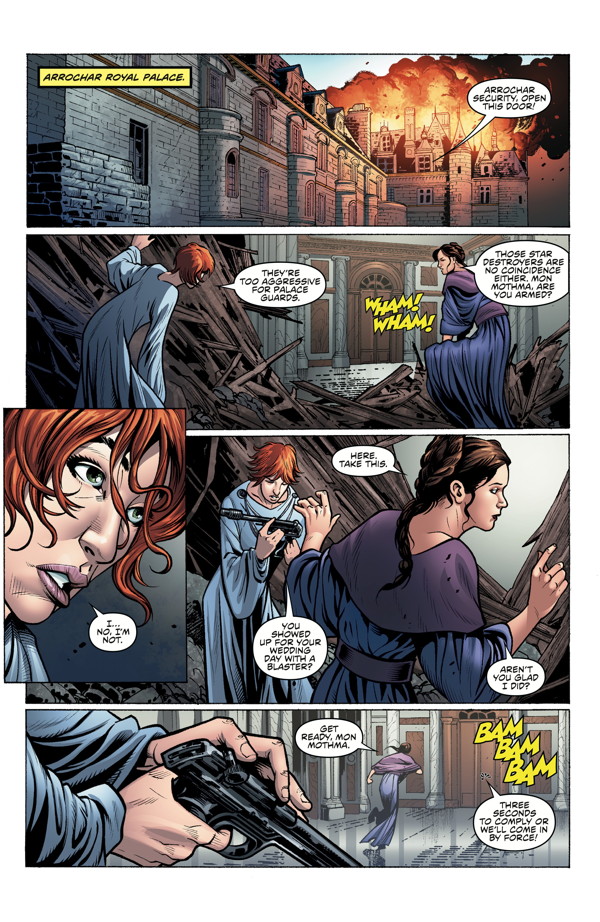 Star Wars #18 ends somewhat cryptically. Leia mentions that guilt she will carry for what happened on Arrochar (which doesn’t really make sense). Below, the text “The End” appears. If you didn’t have any outside information, it almost appears that this would be the end of the series or the end of Wood’s run on it. Neither is true, in this case. Star Wars #19, written by Wood with art from Carlos D’Anda, comes out in July. So I’m not exactly certain the purpose of “The End” on this issue but with the end of all of the Star Wars comics from Dark Horse coming soon, it’s good to know that when Star Wars does conclude this year, Wood will be able to go out with a bigger bang.
Rating
6.7
Pros