One of the titles that took the future of the Star Wars universe the furthest (at least in years) was the original Star Wars Legacy comic book series, which was published by Dark Horse Comics from 2006 to 2010. The new Star Wars Legacy is the second volume of the series, telling the story of Ania Solo, the great-great-granddaughter of Han Solo and Princess Leia.

This Star Wars Legacy takes place 138 years after the events in Star Wars, Episode IV (aka A New Hope). And the situation in the universe is almost the total opposite of what was happening at the outset of the first (release-wise) Star Wars movie. Now, it is the Jedi Order that is the powerful group, creating an extended period of peace. However, whereas it was the Rebel Alliance banding together to covertly fight the Empire in Episodes IV-VI, it is the Sith who are plotting to strike back here. For Ania Solo, despite her ancestors, her situation is not prestigious or glamorous. Rather, she is a junk dealer. By the time of issue #5, though, she has become wrapped up in a rescue mission gone awry. 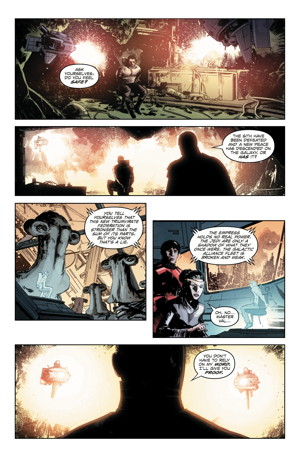 This was my first issue of Star Wars Legacy, and I will admit that despite the summary page (which was very useful) that starts the issue, it was a bit tricky following which characters are whom, and what their role in the overall story has/will be. I realize that this is the conclusion of the first story of the series, but there are a lot of names thrown out in this issue. As we begin this issue, Ania and her allies are attempting to rescue a Jedi Knight called Master Val. It's not going so well. It is soon revealed that Val is being held by a Sith warrior named Darth Wredd. Like Vader, he clothed in what appears to be black armor. He also has a black robotic shell over half his face (visually similar to Cyborg from the DC Universe). Wredd's plan is to murder Val over a broadcast being transmitted to various parts of the galaxy. So Ania is also in a race against time to prevent an act of Sith terrorism. 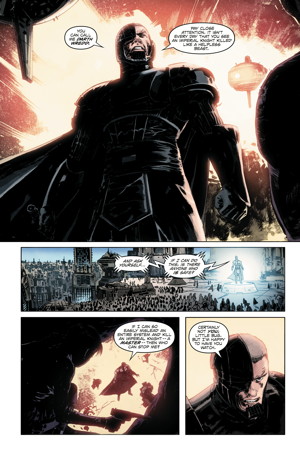 The issue is primarily action, but it does carry this off quite well. There is in particular an extended action sequence involving Wredd that is pretty entertaining. Ania Solo gives a strong showing of her heroism. Although she seems to have a significant amount of self-doubt, she also has moments where she shows that she is a true member of the Solo-Skywalker lineage. So it seems that this series will allow reader to see Ania's evolution. It is pretty enjoyable to get to watch a female character in the Star Wars universe be the protagonist. 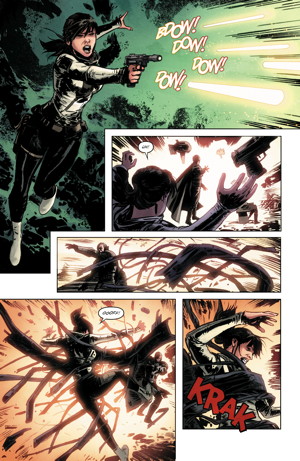 Writers Corinna Bechko and Gabriel Hardman do a nice job in this issue giving some background and exposition without cramming it in. The issue is rather light on character development, but that's probably due more to its placement as the conclusion to the first story arc. While I feel that this issue might be more enjoyable if you've read the first four issues of the second volume of Star Wars Legacy, it's not entirely necessary. There's enough here to make for an enjoyable issue. For starters, Hardman's art is exquisite. He manages to capture the doubt and fear on Ania's face in the beginning as well as the determination there as the issue progresses. He also excels on the action sequences. I'm intrigued, as well, by the oddball group of Ania and her allies: Mon Cal Salk, a Mon Calimari (like Admiral Ackbar in the original movies), and the assassin droid AG-37. There's definitely some echoing of the trio of Luke, C-3P0, and R2D2 in the original movies. It's a group of characters from different backgrounds who have come to rely on each other, and I'm curious to see what happens to them.

The pacing of the issue also works well. As we watch Ania struggle to decide between leaving her allies and pursuing Master Val, we are also presented with the imminent threat to Val. So Bechko and Hardman are effective at ratcheting the tension up by showing the danger the heroes face. The tension doesn't really relent even after Ania finally catches up to Wredd, as she alone seems to be quite outmatched by Wredd.

Overall, as an exciting conclusion to the first story arc of Star Wars Legacy, this issue is quite satisfying because of its art, action and plotting.