If there’s one thing Blizzard completely dropped the ball on, it’s weaving another intricate and rich story. Compared to the narrative efforts of StarCraft and Brood War, StarCraft II’s single-player is nothing short of a colossal failure. On its own, it’s not bad, but in terms of pushing the story forward and fleshing out its established and new characters, it completely fails. 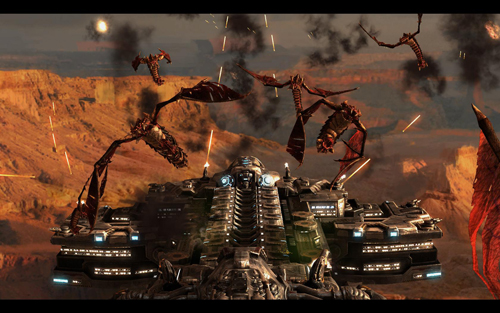 4 years after the events of Brood War, Raynor and his rebellion has done little to overthrow Mengsk’s tyrannical rule. Gears start moving once the Zerg and Protoss start to come into play, though. Kerrigan makes a presence, Zeratul comes with ominous warnings and Raynor’s starting to become nothing more than a washed-up, directionless drunk. It should be a great foundation for tense conflicts and relationships between characters, something the original StarCraft absolutely excelled at, but that just isn’t the case here. For the most part, characters regurgitate mission objectives and then you’re off to play.

The complication of whether StarCraft II’s campaign or the originals’ campaigns is better arises when both have their obvious strengths and weaknesses. StarCraft II’s definitely a lot more fun to play, while the originals’ present an infinitely better story. The variety of the missions keeps it fresh; new gameplay hooks and gimmicks are introduced in practically every single mission. You’ll have a wall of fire chasing after your base, forcing you to quickly build up forces, take out enemy defenses and then fly your base to your new temporary haven. Another will have you race against the clock as Kerrigan makes her way to the objectives you need to destroy before she reaches them. It makes for a “one more mission” kind of addiction, if only because you want to see what new gameplay gimmick the game has in store.

The way you go about teching and preparing for your missions have been completely overhauled. After every mission, you’re dropped back into your ship, where you can cycle through a few sections of your ship to upgrade your base and your army or just to check out what others have to say. If anything, it’s a visual gimmick and wholly unnecessary, but it gives the campaign a better sense of place and suggests that the StarCraft universe is more than just tiny army men and 3x3 character portraits. So, when you get down to it, you’ll have fun, but you won’t be compelled to play due to StarCraft II’s story, which is frustratingly undeveloped; you’ll play because it’s fun to play. For most games, that’s a good enough, but after the kind impact the originals’ left from purely a story standpoint, it’s a trade-off. 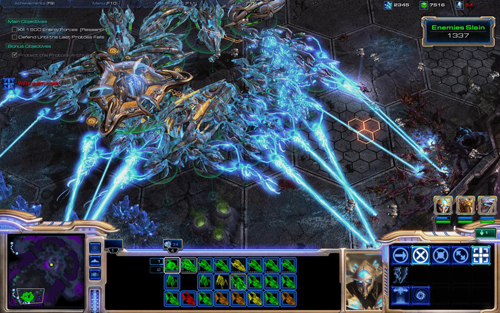 Let’s be real, though. What’s going to the carry StarCraft II for the next million years is the multi-player and my god, it’s wonderful. Battle.net’s overhaul is nothing short of wonderful. Despite the lack of chatrooms, which will be patched in on a later date, online is key a cornerstone of StarCraft II. Friends lists, creating parties, extensive profile listings, economy graphs, etc. – it’s very, very impressive. If there’s anything about StarCraft II’s multi-player that’s not good, it’s the lack of LAN. It’s definitely a bummer, but the list of problems ends there.

Everything should be pretty familiar at first glance and from a distance, most of it seems like it is, but new units and gameplay additions makes for a more polished and complicated multi-player game. All three units are much more distinct than ever before with new abilities. The Zerg’s ability to expand has been amplified quite a bit and the addition of the Queen makes for the kind of multi-tasking and constant “You better doing something every single second.” urgency the multi-player is known for. Protoss’s Warpgates changes the make-up of builds, because of its near-instant ability to warp in fresh units, while the Terran remains the most familiar of all three, making them the most friendliest race to get into if you’re new.

Put all the new and old into a melting pot and you wind up with an incredibly balanced game, where you must do at least a hundred different things at any given time, but you can only do about ten of them at any given time. Its prioritization, hoping you made the right decision to expand instead of go for a second attack, hoping your quick tech into air won’t come and destroy you, even though your quick scouting report of the enemy base indicated a mass rush of ground units. 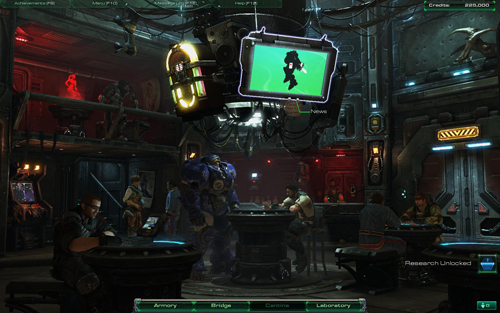 Frankly, the multi-player is exhausting. It’s always so nerve-wracking and the longer the game goes, the greater the fear of facing a bigger army. After a game or three, it’s a wonder how anyone could play this for hours and come away from it not mentally drained by everything that just transpired, but that’s a StarCraft trademark; its relentless and its wholly satisfying to egg out a victory.

Even outside of the multi-player is the editor. It’s already produced gobs of great custom-made material and with time, someone’s bound to create a another DotA. Fresh maps and fresh new games are coming our way. The flexibility of the editor and Blizzard’s embrace of the mod community will assure another million years of life for StarCraft II.

The same amount of polish has gone that’s gone into the gameplay has gone into the presentation. StarCraft II is a great-looking game and it shows off most of its graphical muscle during the incredible in-game cut-scenes, which look so good that it almost makes Blizzard’s CG work nearly irrelevant. There’s a distinct WoW-ness to the character models, sporting unrealistically bulky looks, which is a far cry from the grit and realistic proportions the originals’ had, but it works. The audio is just as nice and slightly uneven. Voicework is iffy in a few spots and some of the writing doesn’t help, but there’s little to seriously complain about. The soundtrack is largely excellent, but an overreliance on orchestra does cut into the identity of StarCraft’s sound, because a lot of starts to sound like something John Williams churned out over a weekend. 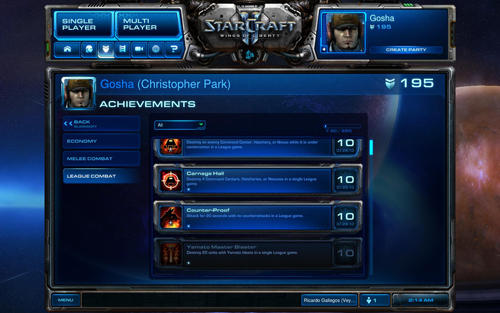 It’s still a little hard to fully accept it, but StarCraft II is out. It’s almost everything you wanted and until the next two installments, this should be more than enough to keep you going. In a way, Blizzard’s been bound by the sheer popularity of the originals, because barely anything has been dramatically overhauled or changed, but with the gameplay essence still this raw and still this refined, being bound by all these restrictions is a great thing. Go have fun with your sequel to StarCraft, because this is definitely a product made up of your demands, not Blizzard’s. A little selfish, but with the game being this awesome, so what?