Static seems to have hit his stride at a low point: his narration never elicits as much emotions as he tries. And he tries hard. New writer to the series, Marc Bernardin, does breathe some life into the series, but refusal to drop an old plot element and the addition of some confusing or pointless material make this issue still sub-par and unworthy of a read considering the next issue of Static Shock will be the last.

Static brings his sisters to S.T.A.R. labs to look into their genetic make-up (like every class act brother should do – bring his cloned sister to a scientific lab). Unfortunately, our teenaged protagonist runs into a duo of overpowered mechas and must use his scientific know-how combined with his electric personality to stop them and another costumed criminal. 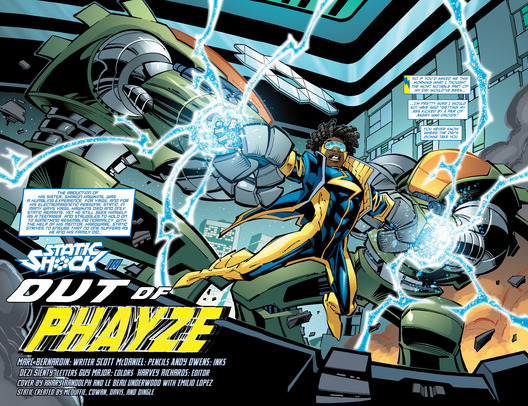 The opening summary for this issue above the title is very melodramatic. Apparently, "The Abduction of his sister, Sharon Hawkins, was a humbling experience for Virgil and for his electromagnetic persona, Static. In many ways Virgil Hawkins died and only Static remains: yet he still sees himself as a teenager and struggles with normalcy." Not only does that summary somewhat contradict itself by pointing out that Virgil is not truly destroyed in "Static's" opinion, but this mountain of emotions was not built up in the previous issue and is never touched upon in the actual narrative of this issue. Though it is strikingly true that we rarely see Static out of uniform, seeming to back the summary during previous issues, but in this issue we are ironically given some time with Static outside of costume, dropping hints about his background, including his age and the reason for his families move. Dropped hints that should have been in the first issue and not the seventh. Bernardin is apparently trying to make up for lost time.

Other story elements are confusing. The most noticeable is the fact that Virgil chose to tell one of his sisters he was Static. The explanation for this is tiptoed around, leaving the reader confused. The fighting scenes are also all solved by science, which in this Static-verse can become hard to follow. It will take more than one quick read-through to understand how Static is solving his mecha and Phayze problems.

There are several improvements from not only the poor last issue, but also from the entire last arc. This new arc starts off better paced with a lot happening in one issue, but never an overwhelming amount. Overwhelming is what this issue avoids perfectly. Unlike the last arc, which had a ton of villains with back stories, names and powers, this issue keeps that department not only simple, but sometimes interesting. The two mechas are indiscriminately taken out by Static in a scientific way that was a bit hard to follow, but it did lead to a great fight between Static and our new purple-jump suited "foe" Phayze.

Phayze's powers are what you would expect. He can walk (or "phase") through walls Shadowcat style and clearly has an above-average intelligence since he could take over the mechas and make them attack Static. He is not the most visually appealing villain, but I look forward to seeing him again after his plausible lie to get away from Static worked it's charm. 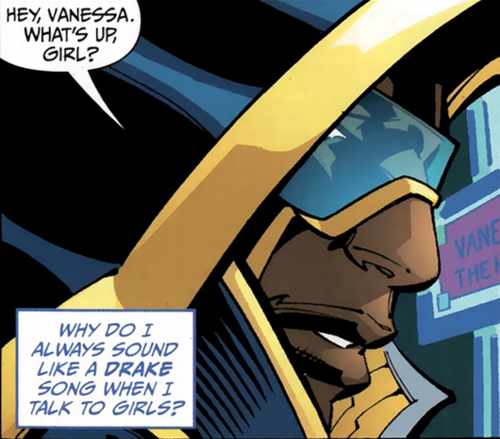 I may have a hardened heart, but none of the jokes were funny (maybe with the exception of the classic “Science, bitch” on a corny day).  They all felt very thought-out, but to the point where the writer focused on them so much that they failed to deliver.  It didn’t feel like “Static.”  Static jokes should be consistent throughout the dialogue but they should also have an “on the fly” sort of feel and not the overly thought-out throw-away jokes and pop culture references they are here.  The "Drake song" line above would not have been as much of a throwaway pop culture line if it did not bring in a last minute character, Vanessa, who added absolutely nothing to the issue.

Former writer and now just artist for Static Shock, Scott McDaniel's art has a mediocre style but, like the writing, has several non-monumental moments. The characters faces continue to have an odd sheen and too many lines, but the emotions are clear in characters eyes. Static even manages to look intimidating in his costume at times when he is surrounded by his lightening with his hood up. His clenched teeth, however, are a somewhat distracting quirk. The fighting scenes are more clear artistically then when narrated by Static with light scientific babble. One page is divided into long strips of interjecting panels with Static flying in each while the mechas stretch across the whole page. While not keeping with the continuity of the panels, this page only stands out more with a unique panel design. But despite looking pretty, it aided to the chaotic feel of the issues action sequences involving the mechas, a feeling which did not spread over during the battle between Static and Phayze, another reason why that battle was so much more interesting than Static versus the unemotional droids.

Static feels like he has a presentable formula this issue: there is action, puns and story. While nothing is executed very well, the issue does set a better standard for Static. Of course it is no where near polished enough to save Static from his cancellation after the next and final issue of Static Shock. Will Static go out with a luminous thunder clap or a fizzling spark? Find out next month when I review Static Shock #8.