By: Nicole D'Andria | Comic Reviews | April 16, 2012
Does the final issue of Static Shock put a shock to your system?  It's a little too late for that; however this issue does make a few small zaps in the right direction.  Yet confusing and contradictory plot points, plus a promising opening grossly misused, make this issue another irritating and squandered opportunity in the Static Shock series.

After taking down a victimized girl gone haywire in Manhattan, Virgil Hawkins makes an appearance outside the Static costume and inside a shrink's office to see how he is adjusting his move to Manhattan. 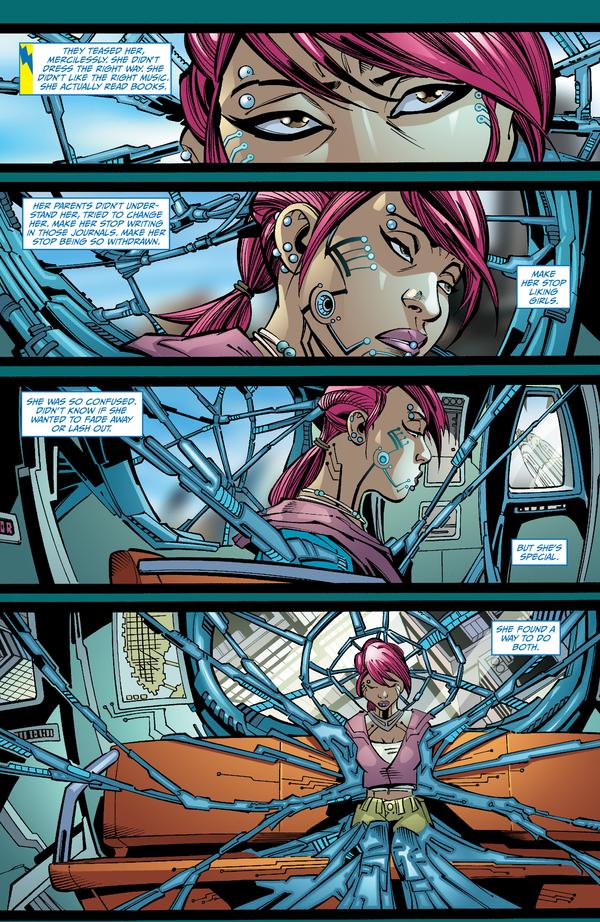 The opening of this issue is a great example of art imitating life; but that imitation is unfortunately fleeting.  In the only fight of the issue, Static takes on the "girl gone haywire."  But she has her reasons, as Static explains in a long-winded narration: she was constantly bullied by her peers for her differences.  Her parents couldn't deal with her.  She was a confused girl who had a preference for other girls.

They posted all these problems on the internet.  The dangers of the internet are a big topic in the media today, and I would have liked to see the nod to these problems, except that's all we get in this issue – a nod.

The girl – whose name is never even given, by the way – could have easily had a story arc of her own.  This would have built up sympathy for her and hatred towards her bullies.  And while her scenario is tragic, and readers may automatically feel bad for her, the story would have been much more traumatic on readers' heartstrings if it was shown and not just told in a two-page exposition by Static.

The resolution of the conflict with the bullied girl was also uncharacteristic of a comic.  Static starts blasting during the standard heroic speech where "you're not a bad person, you don't have to do this..."  He doesn't even give her time to respond.  His other reaction to the bullies was very harsh, showing he was seriously riled – something hard to have happen to our protagonist, save kidnapping his sister.  His emotional response was effective because of its shocking nature, but I would have liked to see where that anger boiled up from with an entire issue dedicated to the bullied girl's origin.  It felt like a blatant and effective commentary on the lifelike situation.

Thrown in after the quick fight between Static and the girl, and occurring throughout the rest of the story, Static, in his civilian guise of Virgil Hawkins, goes to a shrink.  Finally, he's out of costume, and we hear his entire origin story.  It also explains why his family moved from Dakota to Manhattan.  This was a solid and realistic conversation between a shrink and a superhero (with Virgil omitting everything about his secret identity, of course), and the conclusion the shrink makes about him towards the end of the conversation continues the realism and was an interesting point that I would like brought up again – but it seems a little too late for that.

But one thing Static said to the shrink didn't ring true.  When talking about his social life, Virgil said it could sometimes be difficult.  The shrink also mentions his isolation.  Yet towards the end, we see him with two people who he is obviously very close to.  Someone's confused isolation with companionship.

I get how these two events are trying to connect by showing how important friendship is and by showing the hardships teens face in life.  But these storylines still would have been more effective with more time.  Obviously, being its final issue the writer's did not have time for that, but they should not have taken on such a large endeavor that was watered down poorly into a single issue. 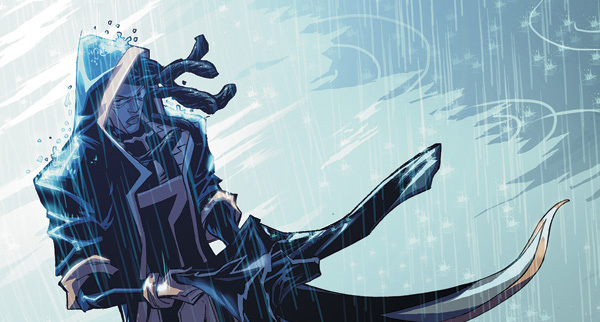 Scott McDaniel continues his pencils with Andy Owens continuing to ink, and a lot of problems crop up during their more complex panels.  There is a lot going on in this issue visually.  Multiple one-page spreads, and sometimes two-page spreads are used.  They are all used effectively with a lot of dialogue included, and seeing an array of colors from Guy Major gave the spreads some appeal, but a lot was going on in every one.  Everyone Static has gone against was included in two-pages, and if you've heard my complaints about the colossal roster of villains Static has been facing off within this series, you would think this spread would be overwhelming.  Ironically, these bigger spreads are usually pretty well-done feats of McDaniels.  It's great to see him connect the whole series of characters, and feels like something that provides great closure to the series.  Ironically, every other page with multiple panels are the ones that feel overwhelming.  There is always too much going on, with Static or Virgil going back-and-forth with someone, whether it is the shrink or the bullies, or the upset girl.

The only other notable quality if used when the greater details of Virgil's origin are explained to the shrink.  McDaniel uses the same psychedelic theme that has been used throughout the Static series for origins.  I have never liked the style, which is reminiscent of Yanick Paquette's work on Swamp Thing.

On their own both Static's encounter with the young girl and the shrink are solid storylines when separate, and if they were more expanded upon in separate issues these storylines could become much better issues.  If I had to pick one, I would say a full issue where Virgil flashes back to his origin and his life more extensively in Dakota, would have provided perfect closure for this series.  Instead, there are two great stories here marred by being put together.  Combined with the story not always adding up and the artistic hardships, this issue is average at best, but like the rest of the Static series, could easily have been so much more.