Stealth Inc.: A Clone in the Dark Review: Shadows As Allies

Stealth is a gaming genre that has more or less fallen to the wayside for more exciting, bombastic, and blockbuster experiences that now pervade very game store shelf. Recent games like Dishonored and Mark of the Ninja have brought life and style back into the long-forgotten world of stealth gaming that was once inhabited by the Metal Gears, Thiefs, and Tenchus of years long past. Stealth Inc. A Clone in the Dark follows the like of Mark of the Ninja. Both are two-dimensional stealth games that manage to be superior than most third-person game of the same genre. The game is not as flexible as Mark of The Ninja, but it opts for a more focused, puzzle experience, but damn if it isn't good in of itself.

Stealth Inc. has a surprising amount of atmosphere. It nails the factory-esque, corporation, robot manufacturer look and sound. Lighting plays a large mechanical and visual role in the game. You must use it to sneak past turrets ao you won't get spotted, but also for switching on terminals in the dark without being spotted by the enemy drones and turrets. The game is very intelligent and intuitive on how it utilizes the "player indicator for seen and not seen." They resort to using the main character's goggles. It is very easy, sudden, and allows players to concentrate on their character at all times, never making the player concentrate their vision elsewhere which is paramount when you're talking about a platformer. Animations are simplistic, but charming. Sound is equally excellent sometimes relying on ambiance, but more often than not its techno-esque mission impossible music that complements the factory atmosphere resoundingly. 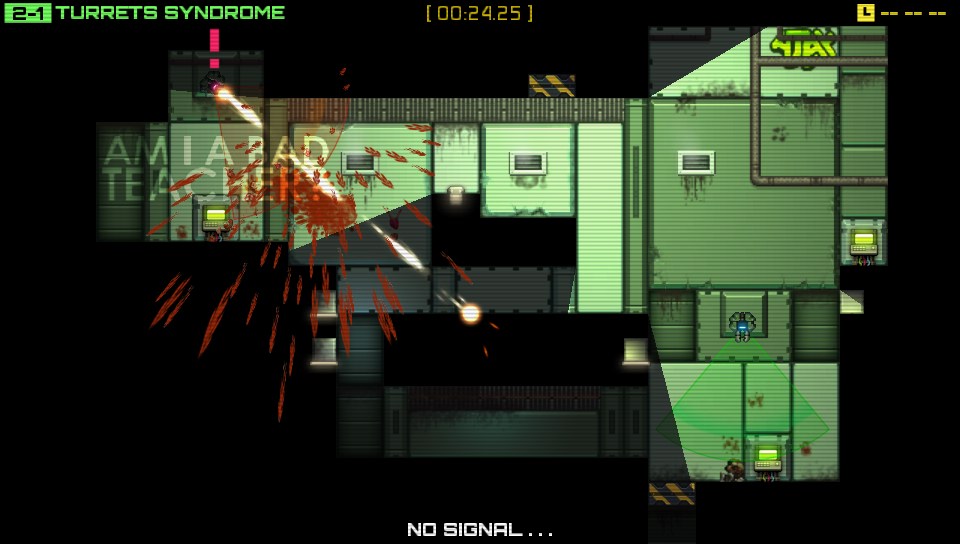 The majority of Stealth Inc's gameplay is purely centered around puzzle-platforming. The puzzles and enemies are challenging, but well balanced and vary through each "sector" of the game, forcing you to rethink your tactics. It is this wonderful change of pace throughout that keeps the player invested. It still however manages to be fast paced, by dividing the levels up into bite-sized puzzle-platforming goodness. In other words, it understands portable gaming and the Vita itself. The game is constantly keeping the player on his/her toes when by altering its level design, enemy types, environmental hazards, and puzzle mechanics. Not only does this create an engaging and difficult gameplay experience, but it coincides with the game's concept perfectly.

You are a test bot, that is performing a series of tests for a corporation to prove your worth. The dry and sarcastic dialogue that is spouted by an observing executive that is relayed to you through background text as you solve or fail puzzles is a great and inventive incentive. Platformers' greatest sin is the faulting of the controls, and Stealth Inc. nails this aspect as well. They are tight, responsive, and feel right at home in the hands of the player. The boss fights are fantastic making the player utilize the skills they have acquired over the course of a "sector," by placing them into a game of cat and mouse. Plus there are no mandatory touch controls.


Replay value comes in the form of score chasing and besting your or other people's time. The game is so fun however that score chasing only increases motivation to keep playing and never becomes a chore. The game does have some platforming flaws though. As well as the controls feel and react, perhaps they react to well. Too often does your stealth bastard hand onto ledges you never wanted him to grapple and the jumping can be a little too imprecise.

Stealth Inc: A Clone in the Dark is as good a stealth and puzzle game as it is a platformer. It manages to ride the line so well that the overall feel is seamless and never egregious as to what aspect of the experience is more or less superior. This is even more commendable when you realize that most games have a hard enough time nailing down one particular aspect and this game does all three effortlessly and sometimes the blending can produce ingenious results. Oh, and did I mention it contains a level editor along with Cross Buy & Play for the Playstation 3 and Vita? Not only Stealth Inc. is a great game to play on a home setup, but also on the go with the Vita.