Stormwatch #19 – Review: Shhh. Don’t Tell Demon Knights This Totally Screws Over Their Past Year of Story

I do find it hard to blame them, though. Stormwatch has been a disaster since issue one. It called itself Stormwatch. It wanted to be the Authority. It borrowed from Jonathan Hickman’s S.H.I.E.L.D. But it failed to live up to any of them. It was kind of a mess, and a year and a half of trying really only made things worse. I don’t see how anyone could’ve salvaged it.

So Starlin does it dirty. It’s not a respectful or admirable way to go about it, but it is a job that needed doing.

Starlin really doesn’t deviate much with the new cast. This is still basically the Authority. The Engineer remains, largely unchanged. Apollo and Midnighter have mercifully returned to their Bryan Hitch-designed appearances. Their new origins borrow from Jack Hawksmoor, and their relationship is already established. Jenny Soul is our stand-in for Jenny Sparks, which I suppose is for the best. The character seems like she has some potential, and I also think I would go mad in a world where Jim Starlin wrote Jenny Sparks.

Jack Hawkmoor has been left out. Part of me is disappointed because Hawksmoor is one of my favorite characters, especially out of the Wildstorm bunch. On the other hand, Starlin did do me a favor by wiping his slate clean, so another part of me is glad he’s being left aside in the hope that some writer is free to do something really good with him someday.

Additions to the cast fix one of my major problems with Stormwatch in the New 52. How? Well, there are now actual Stormwatch characters in Stormwatch. Jackson King remains absent, but Starlin introduces a new version of Hellstrike, who is mostly recognizable aside from being South African now instead of Scottish. There’s also Fuji. Or Force, as he has been generically renamed. I’m assuming it’s Fuji. It looks like Fuji, and how many characters can you say that about? I understand Fuji has already appeared in the New 52 as part of Scott Lobdell’s N.O.W.H.E.R.E. stuff, so the name Force may be an attempt to sneak in another version of the character. But that seems unnecessary. Just steal him and put him in Stormwatch. It’s Fuji! I love Fuji. 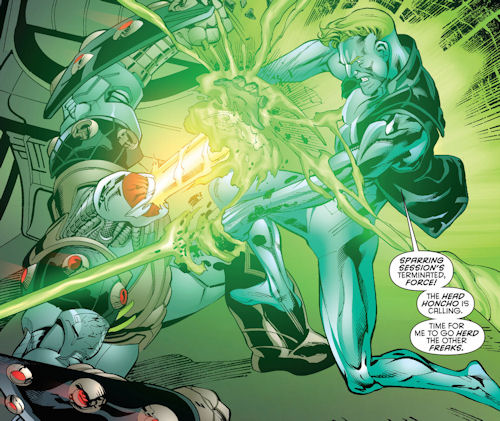 We also have Storm Control, another poorly renamed character. What are you doing, Starlin? Call him Weatherman. That’s the title. Is this actually Henry Bendix? It’s certainly a possibility, and by his design, I assume Stormwatch fans are supposed to suspect as much.

Other additions include the Weird, who is pretty intriguing, and Xiomar, who strikes me as a possible stand-in for the Doctor. I could be wrong there. Not much to go on with him yet. I base this only on the drugs.

Unfortunately, the Shadow Lords remain from the previous Stormwatch status quo. I’m sorry, but they’re called the Shadow Lords. I can’t take them as seriously as this book always wants me to. It’s such a campy name. Shouldn’t they be menacing a Saturday morning cartoon somewhere? 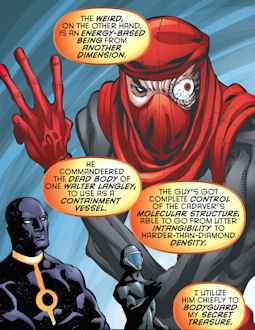 All things considered, this is a major improvement on the previous premise. Familiar elements from Stormwatch have now actually included in Stormwatch. The attempt to reinvent the wheel with Apollo and Midnighter has been ditched in favor of sticking to what works about them. There’s no sign that the concept of century babies, something that had no chance of working in the DC Universe, is necessarily still around even with Jenny Soul’s presence. And brand new characters aren’t hogging the stage from the Wildstorm characters who actually belong there.

However, there is on problem.

I know fans dislike this criticism, but Starlin’s writing style just does not live up to today’s standards. It hasn’t adapted with the times. The dialogue has a tendency to be verbose and unnatural. There’s rarely much personality behind it. In this case, it doesn’t read as terribly archaic, but there is a stale quality to it.

And really, as pleased as I am with some of the changes, I am just not interested in following this story. I had my fill of Starlin-esque cosmic beings back in the ‘90s, so the culprits behind  the altering of reality here don’t do much for me. There just isn’t much that is compelling about vaguely powerful cosmic beings anymore. I need more than that. They look kind of cool, but I’m honestly glad they did what they did. I’m on their side. Can they go wipe out Teen Titans next? 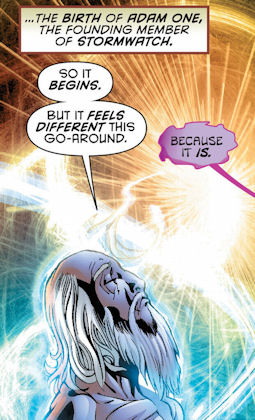 One thing. In the process of revamping Stormwatch, doesn’t Starlin screw over Demon Knights? Adam One isn’t exclusive to Stormwatch. He’s Merlin too. Now, I’m no fan of the character or what Cornell did to tie these two books together, but that’s still what was done. By eliminating Adam One, so goes Merlin. And Merlin is kind of integral for Demon Knights and certain members of its cast. Is this going to be reconciled somehow or just ignored?

I’m assuming the latter since Demon Knights will sadly be one of the next books cancelled in all likelihood.

It’s not pretty, but DC does what it has to do to fix Stormwatch. But it’s probably too little, too late and too Starlin. Many Stormwatch and Authority fans have already abandoned ship on this series, and even with these alterations, Jim Starlin is not a name that is likely to draw these fans back. Because while this is far closer to the kind of cast I originally wanted to see in this series, the writing and art still come up short of doing it justice.