A word of warning: This review contains spoilers for the Netflix series Stranger Things.

If you’re a child of the 1980s, watching the new Netflix series Stranger Things feels like taking a ride in Doc Brown’s DeLorean while chugging a case of Jolt Cola. Set in early 80s Indiana, Stranger Things references a wide swath of pop cultural touchstones from the era. First and foremost, the series owes a huge and obvious debt to Stephen King, who essentially created the “unspeakable terrors that reside in small, sleepy towns” branch of horror fiction from which Stranger Things stems. Naturally, Stranger Things also pays homage to nerd-friendly fare like Star Wars and Dungeons & Dragons, while the synth-heavy soundtrack evokes classic John Carpenter films like The Thing and They Live. Even the central mystery of the series, the disappearance of Will Byers, is reminiscent of the death of Laura Palmer in David Lynch’s Twin Peaks. With that said, Stranger Things demonstrates that it’s more than just a sum of its influences thanks to the engrossing pacing and plotting by show creators The Duffer Brothers. During the course of the eight-episode series, we are introduced to various residents of the fictional small town of Hawkins, Indiana. The primary protagonists are four geeky preteen boys who spend ungodly amounts of time waging D&D campaigns (time that would’ve likely been devoted to video game consoles if the kids grew up today). One of the boys, the aforementioned Will Byers, vanishes under highly mysterious circumstances. The how and why of that vanishing are the elements that conform to genre conventions, but the characters' reactions to Will’s loss are wrenchingly human. In particular, the series’ depiction of Will’s mother Joyce (played by 80s icon Winona Ryder) as she grapples with the loss of her young son would usually be the province of Oscar-bait dramas, not a streaming sci-fi TV series. 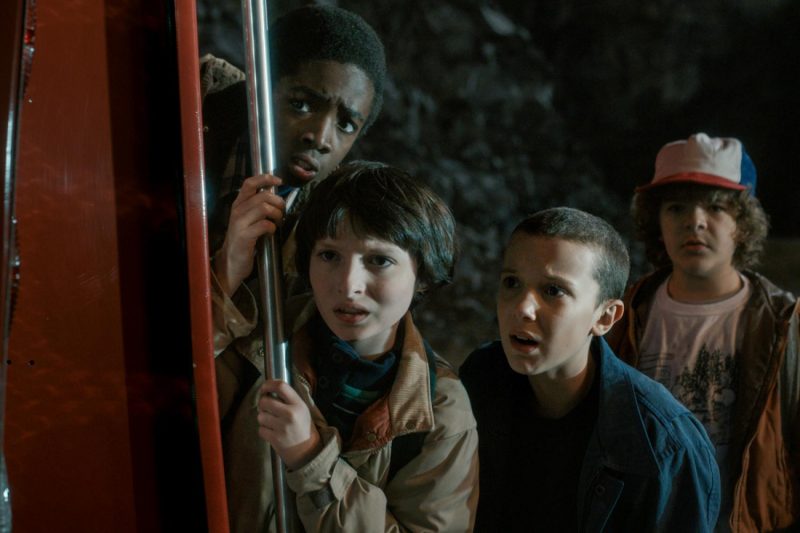 The investigation into Will’s disappearance is headed up by Jim Hooper (David Harbour), a police chief with a tragic past and a Harrison Ford-like growl. (Harbour’s character even wears a brown fedora, just like Indiana Jones, which is surely no coincidence.) We get acquainted with Mike Wheeler (Finn Wolfhard), one of Will’s friends, and his family. Mike’s sister Nancy (Natalie Dyer) has her own Sixteen Candles-inspired love triangle between sensitive photographer Jonathan (Charlie Heaton) and local lothario Steve Harrington (Joe Keery). There’s also Will’s friends and fellow outcasts Dustin (Gaten Matarazzo) and Lucas (Caleb McLaughlin) to fill the “achingly awkward 80s dorks” void that’s gone unfilled since the cancellation of Freaks and Geeks or, going back further, Revenge of the Nerds. And if that’s not all, Stranger Things introduces us to a mysterious young girl named Eleven (Millie Bobby Brown) with telekinetic powers who escaped a government facility and is being ruthlessly tracked by a team led by Dr. Martin Bremmer (Matthew Modine). During the course of the series, viewers discover that Will’s disappearance and Eleven’s appearance in Hawkins are connected to The Upside Down, a dark dimension which houses the Demogorgon, an open-faced demon that preys on humans. The mechanics of how this Upside Down dimension is supposed to work are somewhat wonky and ill defined. For instance, Joyce is able to communicate with her son with the aid of an elaborate display of Christmas lights in her home; however, later on in the series we’re told that it would take a considerable expenditure of energy to open a gateway to that same dimension. In truth, the build-up to the strange things in Strange Things is more satisfying than their resolutions, which hinge upon fighting a (practically) faceless, personality-free monster. Also, the connection between Eleven and the Upside Down is never fully explained, particularly how she is able to use her powers to communicate with the dark dimension and to what purpose. But by the time we arrive at the somewhat unsatisfying denouement, we’ve already engrossed in the slowly unspooling plot and in a likeable cast of characters that we're already emotionally invested in. Like the Demogorgon itself, Stranger Things catches you in its sticky, mucous-y web and refuses to let go. 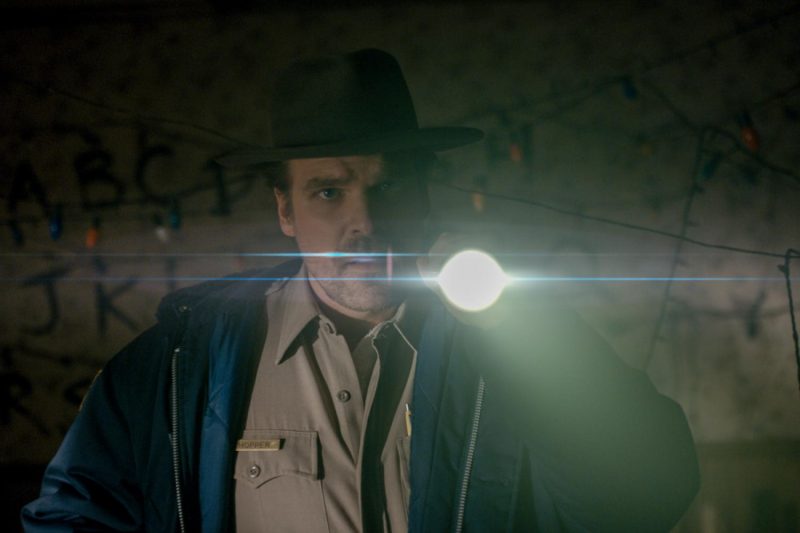 While veteran actors like Ryder and Modine acquit themselves well, the real stars of Stranger Things are the winsome young leads. Wolfhard, Matarazzo, and McLaughlin are achingly endearing and demonstrate great chemistry both amongst themselves and in reaction to Brown’s character. As a character, Eleven (or El for short) often vacillates between timid, defenseless girl and an all-powerful force, which results in characterization that, at times, renders her more of a plot device than a fully developed character. But to her credit, Brown does a great job of providing the range that such a role requires. Similarly, Dyer and Heaton manage the near-amazing feat of making their teenage characters act, look, and sound like credible teenagers, and even Keery invests what could’ve been a typical teen archetype with surprising depth. In short, Stranger Things provides enough intrigue to keep viewers guessing. The Duffer Brothers are clearly enamored with the 80s aesthetic—check out the synth-tastic opening credits scene for a notable example—but they stop just short of bombarding the audience with period fetishization. In fact, the best compliment I can pay the series is that it feels like it would’ve fit right in with It, The Stand, and other Stephen King works adapted into TV miniseries during the 80s (albeit with added cursing and even more graphic violence). While hearkening back to films and TV shows of yesteryear, Strange Things stands on its own as a worthy entry in the sci-fi/horror genre.
Rating
8.5
Pros