Last weekend at the New York Comic Con, Capcom held a panel that revealed not only when you’ll be able to get your hands on Street Fighter X Tekken, but also the extras that will come in the Special edition, along with details on the new “Gem” system that will help in balancing the game for newbies, and providing experienced players the option to better customize their characters.  We also got some hands-on play with the game as well.  Here’s what fighting fans need to know.

It plays with a more realistic style than the recent Marvel VS Capcom games, with less over-the-top mega ultra super attacks.  Projectile attacks are present, giving it more of a Street Fighter feel than a Tekken game.  The game it most closely resembles is Street Fighter IV, but with a very robust tag team system. 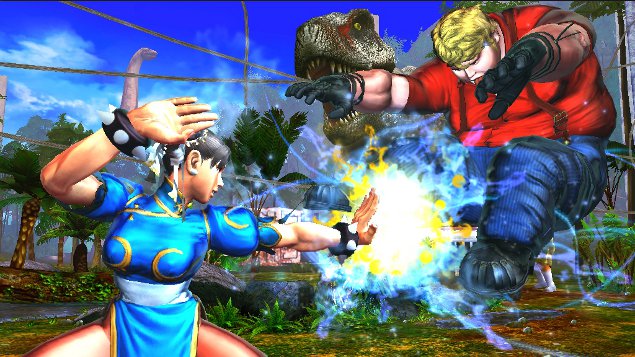 The full cast list hasn’t been announced as of this writing, but it’s growing more extensive as development progresses, and the latest character revealed at the NYCC is Rufus (An announcement that brought a mixed reaction from the crowd).  At present there are 27 playable characters with an even mix of fighters from each franchise.  Several others were teased at Comic Con, and it seems that M. Bison from Street Fighter is one of them.

A much more important revelation at Comic Con was a detailed explanation of the new “Gem System”.  This allows players to equip up to five gems that each provide a different stat boost like increased damage, speed, or defense.  This is intended to make the game more accessible to new players, and can also be used by experienced players to make their characters more distinct.

The gems are activated by meeting certain conditions during the fight.  Simple ones will activate by giving and receiving damage, others require the user to make specific kinds of attacks, or even get hit by certain moves by the other player.  For players who are new to fighting games, equipping the right gems will let them gain special powers just for getting beaten up, or for hammering away with basic button mashing.  Experienced players will be able to tailor their characters with stackable effects granting significant increases to damage, hit points and attack speed. 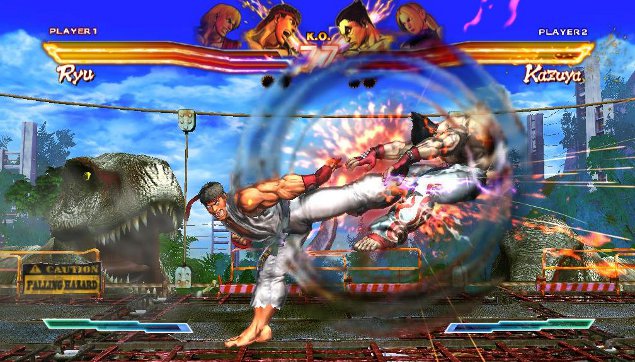 No doubt clever players and hardcore Min/Maxers will find ways to use these to build grotesquely un-balanced characters for competitive play.  The audience at the NYCC panel seemed conflicted about the gem system, but using it is entirely optional, and competitive events can simply ban its use if it leads to balancing problems.

The gems can be unlocked by playing through the game, but pre-ordering from certain retailers will give bonus gems.  Details on the Collectors Edition were announced at the NY Comic Con, and it will include an even bigger jackpot of bonus gems in addition to all of the gems that come with the pre-order grab bags.

The Collectors Edition also has a bank shaped like an arcade cabinet and a comic book to tell the backstory of the game.

Street Fighter X Tekken is coming out for Xbox and Playstation on March 6th 2012.  PC gamers will be happy to hear that development of a PC version has been confirmed.