By: | Comic News | April 17, 2011
The long awaited book containing the true story of the capture of what many consider to be one of the most infamous criminals in history has brought on artist, Jonathan Case to capture the essence of the time!

Case is a member of Portland’s Periscope Studio, the largest collective of comics artists and writers in the U.S.  Many of his paintings hang within the local McMenamins eaterys. Jonathan’s most recent work was showcased in his critically acclaimed book, Dear Creature, about an atomic sea mutant in the 60’s whose poet soul is at odds with his tendency to eat people.

Case will be appearing at Stumptown Comics Fest, April 16-17th. 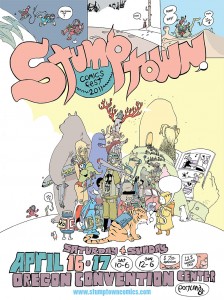 About the book: Throughout the 1980s, the highest priority of Seattle-area police was the apprehension of the Green River Killer, the man responsible for the murders of dozens of women. In 1990, with the body count numbering at least forty-eight, the case was put in the hands of a single detective, Tom Jensen. After twenty years, when the killer was finally captured with the help of DNA technology, Jensen spent 180 days interviewing Gary Leon Ridgway in an effort to learn his most closely held secrets—an epic confrontation with evil that proved as disturbing and surreal as can be imagined.

This is a great add for Darkhorse. I think he will do a great job with this comic book and give the right element to the story.  I can’t wait to check this out.