If you don’t know what the Suicide Girls are then start by googling them and then check back here. Hopefully you didn’t do that at work since you’re probably going to get in trouble. Any ways they have a comic now from IDW that was released this past week with a story plotted by Steve Niles, Missy Suicide and Brea Grant. That’s right three people plotted this bad boy out and it turned out like three people plotted it.

The story revolves around the Girls breaking a prisoner out of the big house. In the not too distant future religion has taken over the prison system and started doing God’s work by culling the streets of misfits and freaks. “Frank” is a victim of such a system and the Girls are there to recruit her, if they can convince her not to kill them first. The book goes on to introduce the Girls and their variable talents while Frank sets them up for convenient dialog of exposition and one-liners. By the end of it Frank is free from the Way*of*Life reform prison and ready to joing the team. 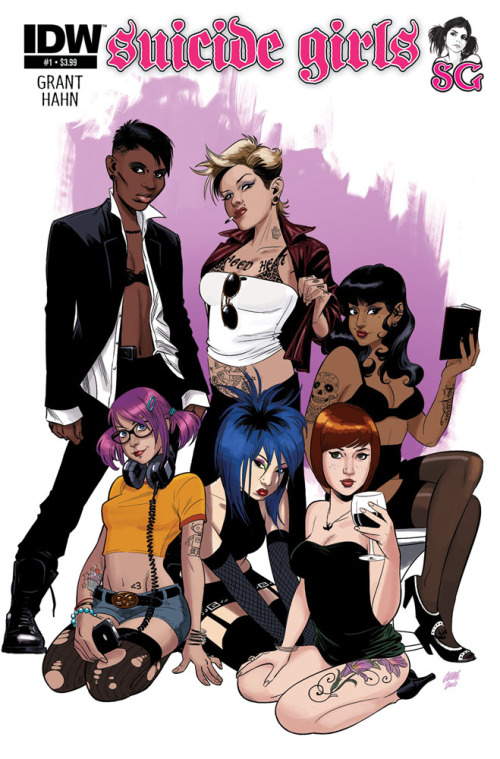 Where to start with this book… how about with the recycled Tank Girl story line? Minus the Kangaroo people and the water shortage you’ve got Tank Girl times six. The actual story telling itself isn’t terrible, but it’s very generic and superficial. It feels like there are too many hands in the cookie jar with the plot. It’s like everyone had an idea, but no one had the courage to say that’s not the right way to go with it. In the end it makes it come across as like a cheap cash in on the Suicide Girls brand, when it could have been interesting and fun to see them in a real action setting. They could have been the A-Team but end up Scooby Doo.

The art is the best thing the book has going for it. David Grant is very detailed with his pencils and is able to draw full looking background settings even in the hallow reform prison. Unfortunately Grant still has a ways to go before becoming a master at visual storytelling. He’s very good at settings and characters, but he never really draws your eye in to follow the action or take control of the flow of the story. The art comes across more like he was told to draw it a certain way and wasn’t allowed any input, which is the real shame.

If you’re really into the Suicide Girls or just like stories about standing up to the “man” then this is the book for you. It does include some hand drawn pin-ups of actual Suicide Girls at the back of the book for die-hard fans. If you’re not really into either of those two elements and desire more substance from your stories then I would give this book a pass.

Overall Score – 5.0
*If you haven't read Tank Girl check it out*