If Fall/Winter of the film season is about contemplative and quiet films, Summer is all about knockdown, dragout brawls. And this Summer season has provided us some decent contenders to the point where we ask (and debate): who would win in a fight? We can argue all day long, but it's up to our readers to choose the winners of Summer 2011! Leave your thoughts on the matter and vote the first round of winners below! 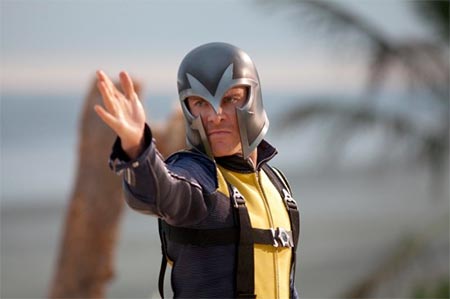 Magneto
He isn’t the Juggernaut, biatch; he’s Magneto. Born of rage, vengeance, and hopes of world/mutant domination, Magneto uses his charm and his magnetic manipulation to gather other rabble among the mutant race. Nothing messes with a guy’s head worse than being responsible for his own mother’s death, at least in the “First Class” universe. He is callous, elitist, and an indiscriminate murderer. Better yet, he rarely works alone, but he always works smart. If caught in a jam he can just fly away and return with a suspension bridge to crush an opponent. Not good enough? How about commanding a fleet of missiles in your direction? Even if he does cry every now and again, he can walk with swagger knowing he took out his greatest rival on the first try unlike a certain wizard… ~ Dinah 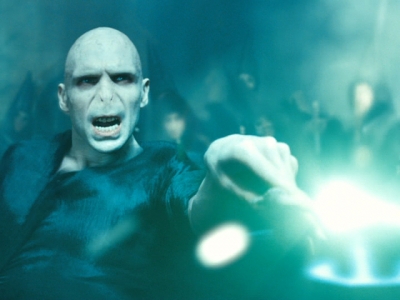 Voldemort
Easy! Lord Voldemort is the leader of the Death Eaters! While Magneto can manipulate metal and has some of mutants in his corner, he’s clearly no match for Harry Potter’s main enemy. Voldemort can call on fellow Death Eaters like Bellatrix Lestrange to conjure up some spells to destroy any attack that Magneto and his mutants might throw his way. Not only that, Voldemort has the all-killing deadly curse, one even Magneto would have a hard time evading. Additionally, X-Men proved that a plastic prison can contain Magneto. Get some plastic food containers, use a fire spell to melt them together, and throw Magneto into the middle of it. Done! ~Julian

Caesar the Ape
You don’t think Caesar is crazy? This fool is not wearing pants. He is a freaking wild animal and not one of the dumb ones like an ostrich or sheep. This is a monkey; he has opposable thumbs for goodness sake. Monkeys have always proven mischievous and evil without mind altering brain enhancing antidotes for Alzheimer’s. They fight, break out of cages, throw feces and even engage in prostitution (Google it). Multiple reports of apes attacking people show that these creatures fight dirty. They don’t go for the jugular like a lion or tiger, they go for the nuts. Yes, I said it, they like to yank off the soft fleshy pieces like nose, ears, lips, and your junk. A man, even a Captain and pirate can survive many things, but nothing brings a person down like a yank of the penis. Caesar for the win. ~Dinah

Captain Jack Sparrow
Caesar from Planet of the Apes might have more fight in him than the average ape, but Captain Jack Sparrow is a force to be reckoned with. Swift and resourceful, he could easily avoid the attacks of Caesar. What’s more, he’s a skilled fighter himself and is quite handy with a sword. He seems to usually have one on hand, while Caesar isn’t necessarily armed at all times. Additionally, if this fight’s going down while Jack possesses the treasure from the Isla de Muerta, then the good captain would have immortality on his side, meaning that anything Caesar did would be rendered useless! ~Julian 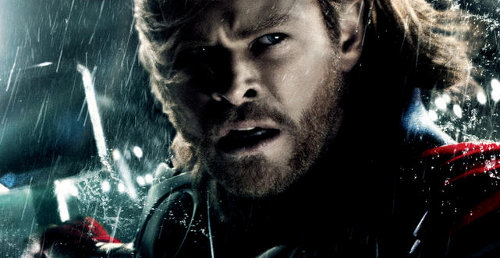 Thor
Just like admirers of the various formats these two otherworldly heroes inhabit (the realm of movies and comics chiefly) there are usually two distinct camps with regards to perception; a plethora of fans each with their own mental picture. Is it simply Thor: Prince of Asgard or Thor starring Chris Hemsworth? Hal Jordon, Earth’s first member of the Green Lantern Corps or Ryan Reynolds, big movie star who has now played two superheroes including Deadpool? This divide not only enrages as much as it piques curiosity but creates a number of different angles of whose ass is grass in Thor vs. The Green Lantern.

Both Reynolds and Hemsworth certainly sport cheese grater abs that would make the missing holes in Swiss come running back to hide, but when it comes to the famed titans they portray there are strengths and weaknesses abound on both sides. Now, when considering comic lore, choosing the winner is as simple as three words: Thor is immortal. In this summer’s adaptation however, he is not only stripped of his powers by Odin but the film hints that Asgard is not some magical godly realm but rather a more grounded alien civilization. Human versus humanesque alien is a much closer fight.

But like Spike TV’s The Deadliest Warrior, a fighter’s success ultimately boils down to their arsenal and this duo sport a doozy. The little hammer with the big punch, Thor’s Mjolnir smashes faces with the greatest of ease and has the handy feature of always returning to its owner when taken or thrown. In one such battle in the comics, the evil Spectrum confined Mjolnir in constructs forcing Thor to retrieve it himself. Of course though he and the Green Lantern have never fought, Jordon’s power ring seems incapable of instantly containing the weapon of the mighty Thor.

Moving onto said power ring (which again can have magical powers or a scientific explanation depending on the generation of comic) harnesses the power of will and gives the bearer control over the physical world (comes in very handy when you run out of toilet paper in a public bathroom). The ring gives this particular Green Lantern the ability to conjure up tools with the ability to stab, shoot, fly and defend, the latter of which Thor’s hammer cannot provide so readily. All that being said, let me wrap up bluntly: immortality and a powerful and loyal weapon beat out a bestowed (albeit magical) gift in any world (paper or celluloid) I can conceive. ~Simon

Green Lantern
First off, I’ll quote Simon: “Both Reynolds and Hemsworth certainly sport cheese grater abs that would make the missing holes in Swiss come running back to hide”.

My opponent knows me well enough. You will not distract me with such an image, friend.

I cannot deny that Thor is a force to be reckoned with as, regardless of the medium you see him, he is a God. However, even Gods can falter—just play God of War III—and nothing lasts forever; not even the immortals. As seen in this summer’s film, there are those in Thor’s universe with the ability to strip him of his powers and even mortality. With the Green Lantern Corp (and all of it’s resources) at his back, Hal Jordon stands a reasonable chance of finding the chink in Thor’s immortal armor.

If you want to talk where these two stack up on a combat level, Thor is the seasoned (physical) warrior. Still, his choices are fairly limited to his hammer and lightning/storm tricks and nobody would claim him to be the most cunning of strategists in comics. Green Lantern’s only limitation is his lack of imagination. His ring is capable of producing force fields, flight, invisibility, hypnosis, block telepathic attacks and even time travel. Stack that up with the fact there is an entire Corp of Green Lanterns that would back Hal up with their own rings, and even Asgard would take a step backwards. With Mjolnr at his command, Thor can control the fury of the skies. With the green power ring, Green Lantern can alter the very universe. ~Max

The Allspark versus the lightning bolt, robot in disguise versus wizard in hiding; as for smackdowns you won’t find much more interesting than this. As is the case with any inaugural duel, we know nothing as this particular boy wizard has never fought a giant transforming semi-trailer cab (trolls and the lord of darkness yes) but never a shiny red and blue truck. That notwithstanding, the obvious point that Optimus could simply stomp young Harry into wizarding heaven, or whatever, though it’s foolhardy to count out magic as a proverbial ace up the robe.

Harry Potter’s wizarding ability is solid and the spells at his disposal many. Though stunning charms and even the deadly death curse Avada Kedavra should merely bounce of dear Mr Prime’s metal-clad body leaving nothing more than a few pesky dents that a Maaco auto body shop could buff out in an afternoon, Harry’s ability to disapperate and then apparate holds some clout in a skirmish and immobilization spells like Petrificus Totalus (also know as the body-bind curse which leaves the victim frozen) may have the ability to incapacitate the mighty transformer, whereby Harry and his pals could disassemble him piece by piece at their leisure.

Like Harry Potter who escaped death by way of destiny, Prime in Transformers: Revenge of the Fallen is brought back from that black robot oblivion by the aforementioned Allspark, rendering him able to fight another day against those dastardly Decepticons. Both are mortal however in their own unique capacity so a well-aimed curse to the mainframe or stern thrust of a light sword to the face should render the enemy on the lesser side of alive. Alas, like any over-compensating sorority girl will giggle to her sisters about, size matters and Optimus Prime has that advantage in spades. Nobility of heart has its place when warring against Voldemort but means little against otherworldly brute force; R.I.P. The Chosen One. ~Simon

Harry Potter
If Harry Potter and Optimus Prime were to go head to head, just imagine what that weigh-in would look like.

So yes…the odds are a bit stacked against the boy wizard. He is only 17 after, and despite needing to take on the Dark Lord himself, still relatively young in his abilities. Let’s not forget the only reason he ever survived his encounter with Voldemort the first time around was due to his parent’s protection over his own—though he did well in the end.

An Autobot, and a Prime no less, is definitely a different story but not one that necessarily ends badly for Mr. Potter. As Mr. Simon points out, the Killing Curse is not likely to do much against Optimus but the young wizard has enough tricks up his sleeve to immobilize the giant tin can and even manipulate it to his will. Plus, if Harry wanted to go dark (spin-off!), he could whip up potions that would throw entire (defenseless) armies at Optimus. Not saying that Optimus couldn’t kill them all, just saying that for a badass robot, he can be a little bit of a priss when it comes to innocents dying by his metallic hand. Harry, even with his good intentions, has little quandary in manipulating those around him to harness their abilities against a common target. Add on his ability to disapperate (not to be taken lightly) and other magical relics encountered in his adventures and young Potter may just pull a fast one on Optimus Prime yet. ~Max

So help us out, readers! Sound off on who deserves to win in their respective rounds below and we'll announce the winners!