"Insomniac Games shows that the end of the world can be just as liberating as anything else"
By: Euan Dewar | Xbox One Reviews | November 3, 2014
Do you remember OverStrike? It was a game first announced by Insomniac at E3 2011. It pitched itself as a third-person shooter with all the creative hallmarks of the studio including a colorful, cartoonish art-style, humorous dialogue and creative weapon design. For a while not much was heard about the game until August 2012, where it was subsequently rebranded with the name Fuse and the marketing for it shifted to portraying it as a more 'serious' game. Gone was the overall vibrant tone of the game, replaced by something that was, according to game designer Brian Allgeier, trying to appeal to an older audience looking for something gritty and dark. Fuse was eventually released in the summer of 2013 to mixed reviews and incredibly lackluster sales.
Whether the shift OverStrike/Fuse made mid-development was one Insomniac decided on themselves or whether it was forced on them by their publisher EA, it was clearly one they were reluctant to make. After having their project bastardized to fit into a certain demographic, Insomniac clearly wanted to put all of that behind them and get back to making games that feel liberated. And Sunset Overdrive is about as liberated as a game can get. A piece of not so subtle, but still quite applaudable commentary by Insomniac on itself as a studio, in addition to just being great fun as a game. 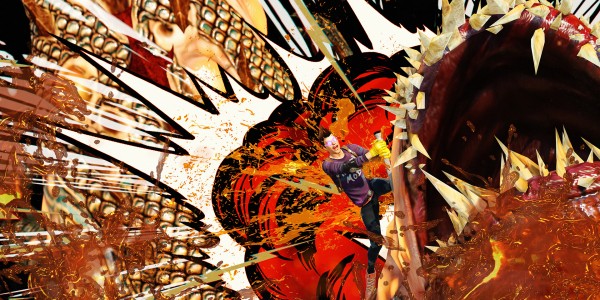 Sunset Overdrive opens up with your (player-created) character working a depressing, dead-end job for the cleaning up after others at the launch of a new energy drink by FizzCo called 'Overcharge.' Unfortunately, everyone who drinks Overcharge turns into mutants dubbed the 'OD' and the game's setting of Sunset City quickly turns to chaos. OD are running amok on the streets and gangs of violent humans are pillaging the city for anything they can find. However, your character doesn't see this as just some world-ending disaster, they see it as a chance to let loose and finally be themselves while attempting to get out of the city. Plot is not the focus here though, its mostly something used to prop up the game's humor and dialogue.
Now if you've seen any of Sunset Overdrive's marketing, you may be expecting the overall tone to be as cringeworthy in it's pseudo-punk spirit as that stuff is. Luckily though, the game itself is for the most part smarter than that. Sure, it does use the awful phrase 'Awesomepocalypse' and yes it does fall into the trap of mocking certain gameplay tropes only to indulge in them itself. As the game moves along though it coaxed quite a few genuine laughs out of me with the way it poked at and exaggerated certain gaming conventions. It's never a moment away from breaking the fourth-wall with reckless abandon and it also includes a delightful late-game extended cameo from an underground rock music legend that completely took me off guard. 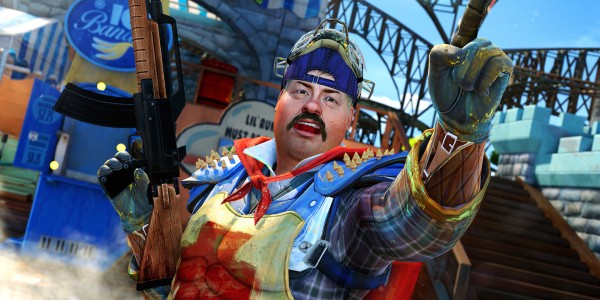 Helping push along the game's vigorous feel is it's blindingly colorful visual design. Mutants spill out bright orange energy drink when shot, explosions are about as bombastic as can be, there are multiple weapons that utilize fireworks in some fashion. The art-style on display here is about the polar opposite of the grey and brown visuals that everyone was grumbling about midway through the previous console generation. We all know from the Ratchet & Clank series that Insomniac can do lively graphics, but they've never done them to this extent before.
The theme of freeform expression is just as present in the gameplay as it is in the rest of the game. Sunset Overdrive encourages you Tony Hawk-style to chain together as many of the various moves at your disposal to rack up huge combos. The end result is like the lively offspring of the Tony Hawk games, Jet Set Radio and inFamous. You zip along grinding on rails and power lines, bounce off of air vents, dash through the air and across water all the while killing the everloving shit out of anything you see. This traversal is a little slow and overwhelming to begin with but becomes huge fun as your character progresses. By the end of the game I had completely forgotten that there was a fast-travel system because I was just too busy trying to string together as many moves as I could while I made my way to my next objective.
Let's be real here though, this is an Insomniac game and that means you wanna hear about the weapons right? Of course, they don't disappoint and damn near all of them. Particular standouts include 'The Roman Candle' which fires off a fast barrage of AOE fireworks as well as the 'TNTEDDY' which, well, it fires explosive teddy bears. What more do you want? (Oddly enough among all these wacky weapons the game actually just throws in an AK-47. Like, it's really just a regular AK-47 with a silly name. Kind of odd but hey ho.) 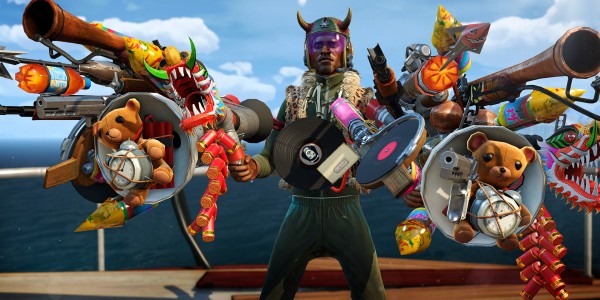 Similar to the Ratchet games all of your weapons can be leveled up through just using them, encouraging you to stick with weapons rather than just briefly trying them out before returning to what you know. They can all also be equipped with a single 'Amp' which gives them an extra effect, for instance the 'Suck' amp gives whatever weapon you equip it on an increased chance of making an enemy drop a health pickup upon death. Likewise your character can be equipped with Amps as well as 'Overdrives', which give you various boosts to your stats whether it be higher damage against the OD or increased ammo for automatic weapons.
There's plenty to do in the game's open world between the various main missions, side-missions, challenges and collectibles (side note: the traversal in Sunset Overdrive actually makes it one of those rare instances of game where it's fun to seek out collectibles). Despite all this though, the game still offers a rather enjoyable co-op multiplayer mode for up to eight players called 'Chaos Squad'. It's a fairly straightforward affair, dumping you and the seven other players in the open-world to achieve objectives together, but Sunset Overdrive's gameplay lends itself well to this kind of unfussy co-op fun.
Sunset Overdrive is about as peak-video game as a video game can get. This is pretenseless and spirited fun with an incredibly well-thought out and dynamic foundation of gameplay systems. It's marketing campaign may have handled it's 'no more self-serious grittiness' message poorly, but the way the game presents it is as heartfelt as it needs to be. This is a studio returning to it's roots and doing what it knows best with as much as style and enthusiasm as they've ever done it before. Welcome back Insomniac.
Rating
8.5
Pros