By: Edward Oliveira | Wii-U Reviews | December 5, 2013
If you would ask me what my favorite games are, I’d answer with the 3D Mario titles. I would personally put Super Mario 64 and Super Mario Galaxy 2 in my personal top ten favorite games of all time, with the former being #1. I can remember the moment when I opened up my N64 and Super Mario 64 on Christmas 1996 and the sheer wonderment of playing a 3D game for the first time. While I thought nothing would come close to that Christmas morning, Nintendo made an amazing sequel to the acclaimed Super Mario Galaxy in 2010. Even in my older, more jaded years, I relived a feeling of old sensation, and I wore my smile through the entire game.
So when a new Mario game gets announced (ironically I exclude those with “New” in the title), it is a big deal. However, this new installment on Wii U, Super Mario 3D World, is not really new, but a successor to the last evolutionary step in the franchise, Super Mario 3D Land on the 3DS. While I can respect the idea of taking the previous good handheld Mario platformer and flesh it out on a newer, more powerful console, I feel like for Nintendo’s leap into the HD era should have been met with a new shocking evolution of the plumber.
Despite that point, Super Mario 3D World is still fantastic. 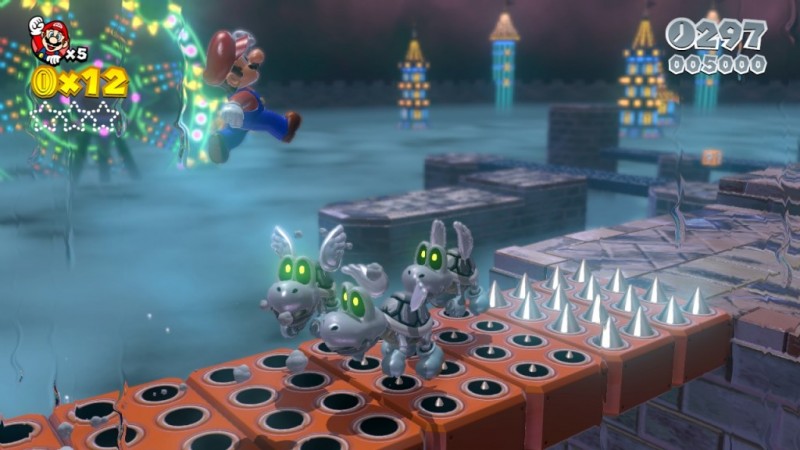 On first sight, Super Mario 3D World may look a bit basic with its art style composing of basic reds, blues, yellows and greens, but you really see the detail Nintendo put into it once you look around the environments. Everything in the game, even the subtlest object in the levels, have been excellently textured and mapped. From the little brick pattern on the bottom of the flagpole stand to the shimmering water in the first castle stage from the dust clouds the characters make when running, everything was built to not have tangents pop out.
The excellent visuals are only complimented by the equally beautiful music. Like the crazy-wonderful “Super Mario Orchestra” that the two Super Mario Galaxy titles sported, Super Mario 3D World has more of a big band feel to it. While every stage was equipped with a nice track that perfectly fit the scenario, I couldn't really pick out tracks that really stood out like how Gusty Garden did for the first Mario Galaxy or the Bowser fight in Mario 64. There were some remixes from previous Marios too so the action was flavored with a dash of nostalgia.
Like Super Mario 3D Land before it, stages in Super Mario 3D World are nicely built and reward exploration, but they lack the extreme energy that the two Mario Galaxy titles poured into every stage. While that’s not truly a complaint, it just makes 3D World feel a bit down-to-earth (both literally and figuratively) compared to Galaxy’s Mario skyrocketing everywhere in space breaking crystals with his face. However, unlocking the next stage was always a surprise because even though the worlds in the game are themed, the stages within them are pretty diverse. It was surprising to see a grass stage in the desert world or water stage in the lava world; or something completely unrelated like a Mario Kart or a Japanese pagoda themed stage. 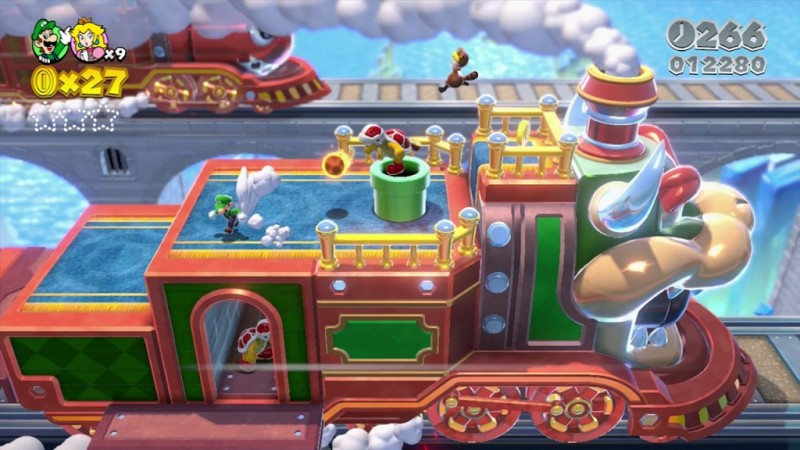 For the first time since Super Mario Bros. 2 back in 1988, you get the ability to play as Mario, Luigi, Toad and Peach; and each of them brought along their Mario Bros. 2 attributes. Compared to the straight-man Mario, Luigi can jump higher, Toad can run faster and Peach is slower, but she can float after jumping. It was fun playing as each of the characters because each of them can make a level feel different. Nintendo even made each of these characters nice subtle design choices with these diverse characters too with Luigi again becoming a kitsune (fox) instead of a tanuki (raccoon) when touching the Tanooki Leaf or Peach sporting a ponytail as Fire Peach. Speaking of Peach, I must say beating Bowser as the oft-kidnapped Princess had a very nice sense of satisfaction to it. There’s a fifth character that you can unlock and he or she is just as unique because he or she has an attack while in a normal form.
One of the features for Super Mario 3D World is that it’s the first 3D Mario with full couch co-op up to four players a la New Super Mario Bros. Wii/U. The co-op is fine if you have a friend or a pack of friends who know what they’re doing, but it becomes a mess if you have a more casual Mario player in the bunch. The camera pans to the player who’s ahead instead of the majority, so a single player can prevent the others from doing other things like exploring or collecting Green Stars or Miiverse Stamps if someone decides to break from the bunch.
One of my favorite things about Mario games are their power-ups and 3D World is no different. 3D World not only brings back the Fire Flower, Tanooki Leaf and Boomerang Bros. suit, but they added the oft-mentioned Cat Suit which allows Mario and friends to claw enemies, climb walls and run on all fours. The stages in the game know that this suit is the flagship power-up in the game, making it necessary to find secrets in many levels. The suit does have some downsides like how it can be cheap by climbing the flagpole at the end of every level and hearing Mario or Luigi meowing can be a bit weird. 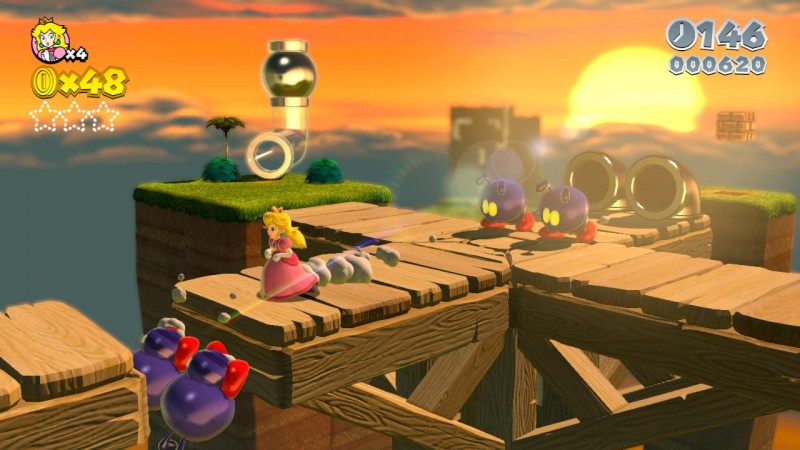 Some Mario games like Super Mario World and Super Mario 64 use every button the controller offers, but since the New Super Mario Bros. blew up, Nintendo believes that simpler controls are superior. While 3D Mario games are usually excluded from this idea, Mario 3D World is the first to adopt a simpler control scheme, and the decision was a double-edged sword. This game only uses three buttons: either trigger handles crouching and ground pounds or two of the four face buttons perform jumping and other actions. I say other actions because it does everything else, like attacking, running, and picking up objects (including other players in co-op). When co-oping, players will be constantly picking up other characters when they want to run.
Have Wii U Pro Controllers, Wii Remotes, Nunchucks, or Wii Classic Controllers? That’s good because Mario 3D World can use them all along with the Wii U Gamepad, and go nuts with all the controllers until you find a fit. I personally played the game with either the Wii Remote/Nunchuk combo or the Gamepad myself, though my friends jumped on the Pro Controller (which I liked the least). The reason I went for the Wii Remote/Nunchuk was because it felt somewhat similar to Super Mario Galaxy in my hands, plus the Gamepad’s triggers would accidentally hit when I jumped and caused some deaths via ground pound. 3D World barely uses the Gamepad for anything except for some tacked on tapping in some stages or finding secrets, but those secrets can also be found by simply ground pounding too. It’s another first-party title that has yet to fully realize what the Gamepad can really do.
For Mario fans, 3D World starts as crazy easy like it's handheld predecessor, but it does gets challenging late in the game. Sadly it took seven worlds to get to a stage that mildly posed a threat to my 999 lives (did the 1-Up trick) and that’s when the real Nintendo fan’s Mario really started. Then after beating the final level several worlds after the final Bowser fight, I still felt that Nintendo could have cranked up the difficulty since co-op can save the more casual players. 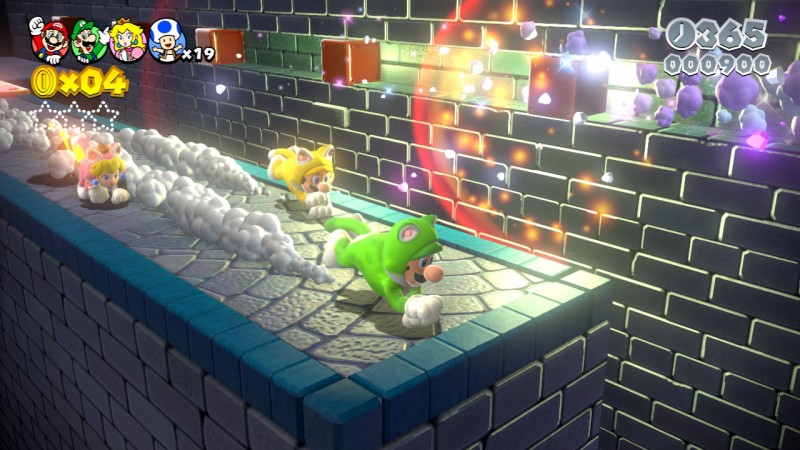 Though it has a few flaws, Super Mario 3D World is still a must have game because it does what Mario games do: provide excellent game design. The game is not just fun as heck, but the constant feeling of getting rewarded when exploring or succeeding is borderline therapeutic. Though it doesn’t prove the Wii U as anything but a more powerful Nintendo console like how Mario defined the NES, N64 and Wii before it, it actually duplicates what Super Mario World did in 1991, which is make a Mario game good enough to buy the system over.
…Ironic that it’s called Super Mario 3D World then.
Rating
9.3
Pros