"AKA: How to make Super Smash Bros. for 3DS obsolete after you made everyone buy it."
By: Edward Oliveira | Wii-U Features | October 23, 2014
Today, instead of a normal Nintendo Direct, Nintendo decided to do the “Super Smash Bros. for Wii U 50-Fact Extravaganza” starring the Smash announcer. This shows off some unique things you’ll see in the Wii U version of game, coming out in November. We’re simply listing them as shown on the video: 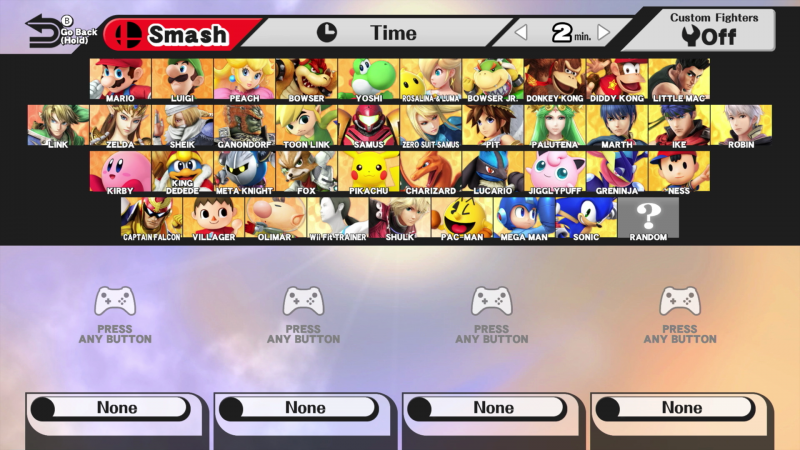 1. Default Character Lineup: The game’s starting roster will contain more characters than the 3DS version on day one. Characters like Bowser Jr. and Ganondorf are available, but some others are still locked. There are no new characters, but the ones you do have play exactly the same as the 3DS game.
2. Resolution: Smash Bros. Will be the second Wii U game to run in 1080p (Wind Waker HD was the first).
3. 8-Player Smash: Doubles the max players for the game. Several large stages were created (or ported) to satisfy this mode, and it is only for offline play. 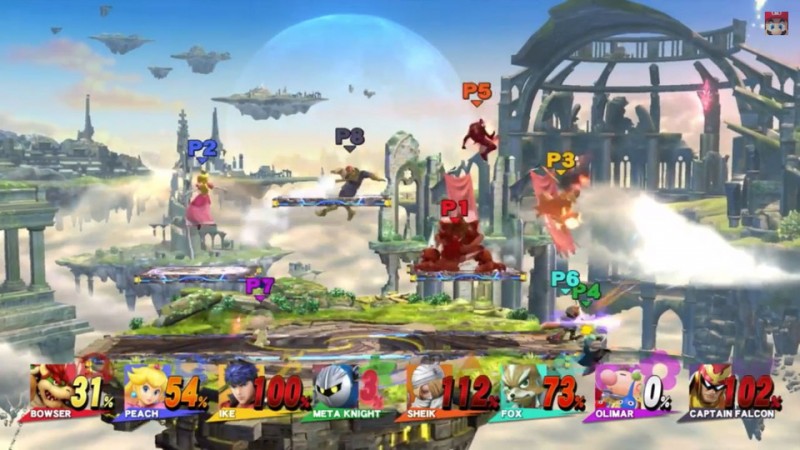 4. Big Stages: 8-Player Smash matches are only done on these few stages, like Melee’s Temple. A few new stages were shown off: Big Battlefield and The Great Cave (Kirby Super Star).
5. Danger Zones: The Great Cave Offensive has danger zones that can KO you instantly if you’re over 100%. Other stages may have it too.
6. Dual Plane Stages: Jungle Hijinx, a new stage based on Donkey Kong Country Returns, has two different planes to play on. Just like the level design in DKCR. The barrels that warp you between planes can’t be spammed or else they explode. 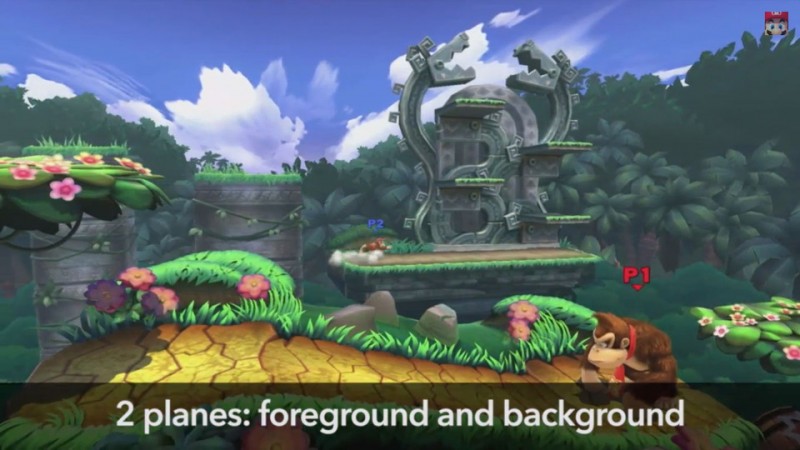 7. Number of Stages: there are more stages in the Wii U version. There was also a Yoshi Wooly World and Mario Kart 8 track in the shot.
8. Miiverse Stage: One stage that will appear post-launch is Miiverse. It’ll allow you to draw a chant of a specific fighter that’ll show up when someone uses him/her. 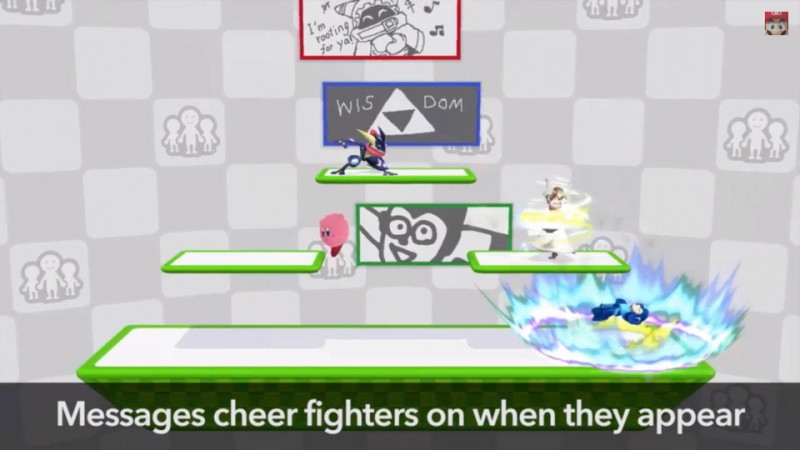 9. Palutena’s Guidance. One of my favorite things in Brawl was that if Snake taunted in his stage, he’d get into a conversation via Codec. Since Snake isn’t in the new Smash, they using the feature with another mouthy, VO-heavy game: Kid Icarus Uprising. Pit and Palutena will talk about the other characters when Pit does a down-taunt. Fox can again do it too in his stage as well.
10. Metal Face: One of my favorite Nintendo villains: Metal Face from Xenoblade Chronicles, interrupts the fights in Gaur Plains. He can be KO’d if pummeled enough.
11. Ridley: Same as Metal Face, Ridley can mess with players in the Pyroshere. He will join a character's side if you attack him enough and can become Meta Ridley if exposed. If he gets KO’d, you get a point- even if he’s on your side. Jerk.
12: Coin Battles: These sort of matches return. Damaging enemies create coins and collect them to win.
13: Stamina Battles: Again, they return. They have HP bars instead of percentages.
14: Special Smash Mode: It is the rule options. Change the rules to become Coin Battles, Metal Characters, Item Frequency and more. Won’t effect your records.
15. Item Frequency: Allows you to customize what items spawn and how often, if at all.
16. My Music: Returning from Brawl. Customize frequency of music.

17. Menu Music: Can now do the same to the Menu’s music too.
18. Tons of Music: Wii U version has a lot more music, and it already looks like it is not as many rehashes like the 3DS version. Wii U’s Gaur Plain had remixed music while the 3DS’ had the songs ripped from the game.
19. Composers: More composers were added since the 3DS game finished.
20. CD’s: Return from Brawl. To unlock songs, you have to collect CD’s that spawn in fights or completing challenges.
21. Challenges: Similar to the 3DS game and Brawl, you get challenges to complete. It is like achievements, but you actually get something out of some of them.
22. Classic: Classic Mode shouldn’t be called that because it is a new thing. It progresses on skill instead of a linear or branched path. There are random events like rival fights and all can be completed with a friend. Difficulty setting is a lot like the 3DS game’s with 100 settings. 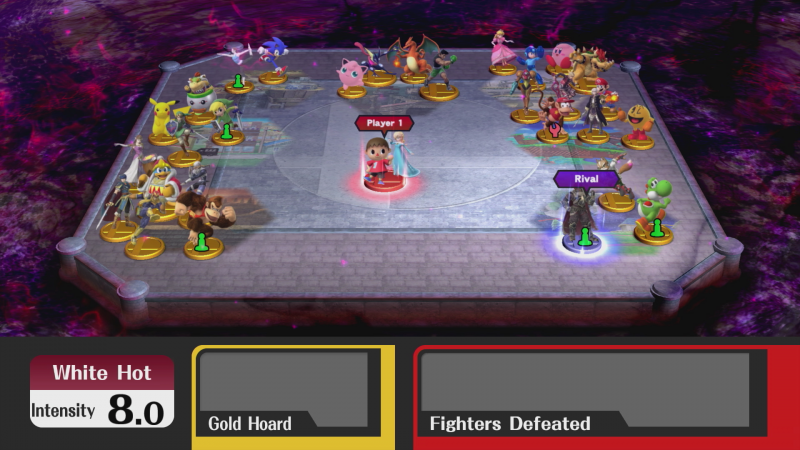 23. Clear Movies: Like with every Smash, you’re rewarded with a short movie when you complete Classic or All-Star. Apparently this was a thing to mention.
24. All-Star: The 3DS game has you playing against a group of characters based on their introductory year. All-Star on Wii U starts in reverse, with newest characters first followed by older. Also can play with a friend.
25. Event Mode: Return from other console Smashes. Play set events with certain rule sets. This time, events branch out instead of a linear path. Like in Brawl, there’s a co-op mode to this too.
26: Smash Tour: The Wii U-exclusive mode. It is a Mario Party-esque board game layout using Miis as your character. You collect items, the same power-ups from Smash Run and fighters. At the end, you do a brawl with the fighters you collect with the power-ups they gained. Your stocks are the fighters you gain, so one with five fighters has more to play with than the one who only got two. 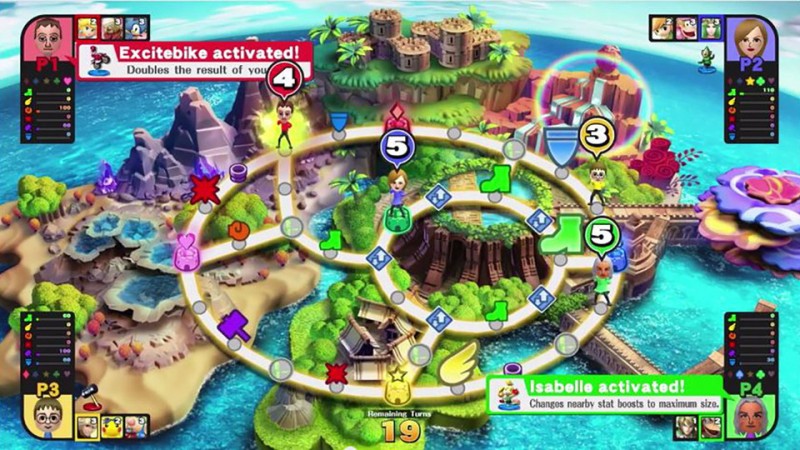 32. GameCube Controller: To use your GameCube Controller, you need an adapter sold separately or in the Bundle Edition.
33. Using the Nintendo 3DS as a Controller: Need Smash 3DS to do it, and each version has an option on the main menu to sync it.
34. Connecting to Nintendo 3DS: Not only can it be a controller, you can bring your custom fighter over to the Wii U version.
35. Tons of Trophies: Wii U version has more trophies than in the 3DS game. Like the stages, the trophies in the 3DS one was more handheld focused, so the Wii U version will have a lot from console games.
36. All-Star Trophies: If you complete All-Star mode with a character, you get their Final Smash trophy.
37. Trophy Boxes: There are also trophy boxes based on themes (Pokémon X/Y-only or New Super Mario Bros.-only for example) for you to collect and finish.
38. Photo Studio: Photo Studio lets you move trophies and make scenes that you can snap. Saw that the Fatal Frame girls are one of the trophies, as if Nintendo of America is laughing at us because we aren’t getting those games.
39. Trophy Rush: Returns from the 3DS game. Has a Two-Player Mode.
40. Masterpieces: Brawl had this too. Allows you to play the VC game of respective Nintendo games for a very limited time. Has a link on them to buy them from the eShop.
41. Amiibo: Amiibo figure players can join Smashes mid-game, level-up or have Amiibo-only fights. They learn and evolve based on your fighting structure, and will get stronger if you use them on another’s Wii U. Link’s can work in Hyrule Warriors as well.
42. Internet Connectivity: Recommends the Wii LAN adapter if your Wi-Fi is spotty.
43. Automatic Notifications: Recent topics are displayed on the main menu and you can read past ones.
44. Friends and Tags: Two players can play online on Team Smash.
45. Tourneys: Like in Mario Kart 8, you can create and host online tourneys that’ll last a particular amount of time. Whoever scores the best wins.
46. Tournament: Brawl has this too. Make a bracket on the console for up to 64 people for that console. You can watch replays.
47. Wii U GamePad: Screen can show what’s on TV or the damage info.
48. Paint: Allows you to draw on pics you took. A future update allows you to share them online.
49. Voice Chat: The GamePad mic or a headset allows you to talk to friends. Only before and after matches though… Just like MK8. Stability was their reason.
50. Stage Builder: This is cool and more customizable than Brawl's by a lot. Draw your land with the GamePad and add elements like springs and danger zones. All the stage songs are usable and five backgrounds.
51. Sharing: Yea, 50 facts my butt. This isn’t available at launch, but you’ll be able to share photos, Mii Fighters and stages with friends. You can also post them online for others to access and download.
Afterwards they discussed briefly what’s the same between the 3DS and Wii U versions, and finished it off with Bowser Jr.’s intro video:

OK. Maybe not "finished." Then after that…
52. Movies: All the intro videos for the new characters are on disk to watch on your TV.
53. Sound Test: The Club Nintendo promotion allows you to snag the games’ soundtracks if you register both the 3DS and Wii U versions before January 13, 2015. There are 36 tracks on each disk.
54. Mewtwo is on the way! If you buy both the Wii U and 3DS versions of the game, you get Mewtwo as a free download for both games. The DLC will release this spring. Nintendo did later say that Mewtwo will be paid DLC if you don't own both versions. 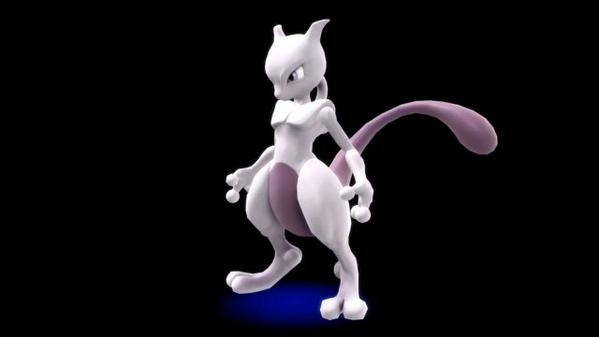 So, this just made the 3DS version look useless. Who can't wait until November 21st?