Superman #712 is shrouded in controversy, as it was originally supposed to begin the Grounded arc – which tells the story of a Muslim hero aiding the Man of Steel. For more than a few reasons, the arc has been delayed several times. In its place, DC released a lost one-shot that takes place after the events of Infinite Crisis. Superboy is dead, and Superman is nowhere to be found. Issue 712 tells the story of Krypto, and how he would go to any lengths to find his friends. I’m going to need a limb, because I’m about to go out on it. 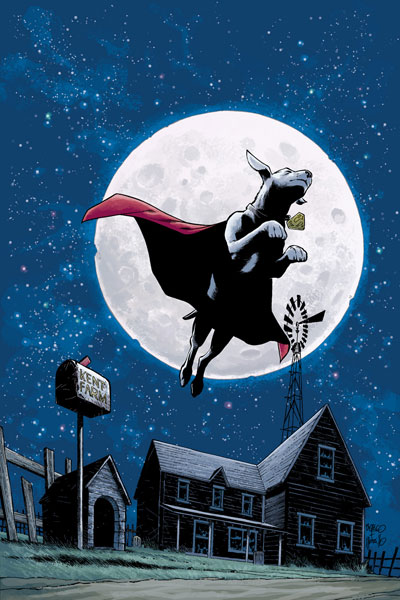 This is as perfect as a comic can get. Busiek has captured the relationship between a boy and his dog better than anyone else. There’s barely any dialogue, but each panel hits you in a different way. Leonardi’s art is telling this story just as much as Busiek words, and he gives a dog more emotional range than others can give humans. Both storytellers fill each panel with as much emotion and depth as possible, such as beginning with a sullen Krypto looking up at the sky, spotting a bird, and then a plane. His super senses allow him to sniff out history, and as his search takes him to the settings of Infinite Crisis he sees what happened to his friend Superboy, leading Krypto to the place Conner met his death. And if the search wasn’t enough, the final page of this issue should leave any reader with a heart fighting back at least a tear.

The only minor flaw in this comic is its timeliness. Superboy has long since been revived, and Superman is no longer missing. If this issue had been released when it was meant to, the impact would have been much greater. But you can't blame the content on the politics. In a way, this only proves how powerful of an issue this is. The story has been irrelevant for years, but the impact it had on me lasted longer than any I have read in years. Maybe I’m just a sucker for animals, and my love for dogs is making this an incredibly biased review – but I honestly don’t care.

I don’t care if you aren’t a fan of Superman – it doesn’t matter.  I don’t care if you don’t like comics. Even if you just love dogs, do yourself a favor. Go to your nearest comic store and pick up what may be the best single issue of the year – and perhaps the best one-shot of the decade.