Superman: Secret Origins, acts as a snap shot into Clark Kent’s life and journey in becoming Superman. This issue focuses on Clark’s first day at the Daily Planet and Metropolis’ first meeting with Superman. Clark is amazed by the big city, so much so that he makes himself late for work while gazing up at the skyscrapers. He makes it to the Daily Planet and is introduced to Rudy Jones, the man who will later become the villain Parasite. After ripping Clark off for his lunch, Jones gives him the run down on the Daily Planet, which is on its last leg as a publication.

This is not the Daily Planet that readers are familiar with. This is a paper that has been black listed from Lex Luthor events in a city practically owned by him. The paper’s hard times are related to several editorials attacks against Luthor and his company, forcing Editor Perry White to hire fresh fish and eccentric writers. Clark meets his future pal Jimmy Olsen for the first time and several supporting characters are introduced as well. After checking in, Lois takes Clark out into the field to help her get a Luthor story. Lois sneaks into the event wearing a ridiculous blonde wig, while Clark unknowingly works as a distraction. Lois is discovered by security and tries to make a quick getaway that leads to her and a helicopter falling off the side of the building. 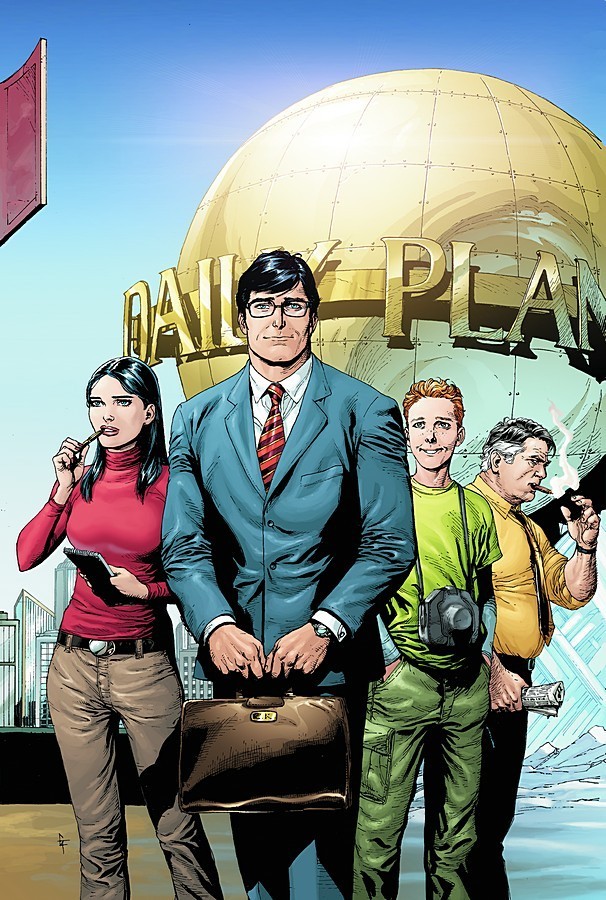 Clark hesitantly jumps into action as Superman and catches Lois and the helicopter. Lois and Superman exchange classic dialog while Superman effortlessly lands. After setting them both down, people surround Superman and explode with questions. Caught off guard, he’s forced to leave and think about something his father once told him: You can’t put the cat back in the bag. The world knows there’s a Superman which leaves Clark feeling like he’s made the mistake of a lifetime.

Gary Frank (Midnight Nation, Supreme Power) captures Clark as a bumbling country boy perfectly. There’s real innocence in Clark/Superman’s face that makes the man of steel more human than he’s even been before. Clark/Superman has a shocking resemblance to the late Christopher Reeves, which makes the character all the more real. Frank’s art is so detailed and so life like that the city of Metropolis feels alive on the page. Even the supporting characters are full of animation that gives them a sense of realism. Frank draws a movie on every page and because of that he could be the best artist to draw Superman ever.

Geoff Johns (Action Comics, Green Lantern) demonstrates his knowledge and history of Superman with this series and particularly with this issue. Each page shows how much Johns cares about the character and the world he lives in. He treats Superman as the most important character he’s ever written. Johns’ Superman is not a re-imagining of the character, but rather a clarification of his past and a statement of his morals. It reorganizes the time-line of villains and supporting cast to make a much more cohesive origin. The reaction the world has to Superman adds something that is missing from the ongoing title today… Shock and Awe.
Simply put, Superman has done everything, so what’s there to be surprised by anymore? It was brilliant seeing Superman’s response to the crowd and his feelings of being overwhelmed not only captured on his face, but also in his soft spoken words.

Johns and Frank continue to up the ante with every issue of this limited series. They both have an understanding of the character and make Clark like any other confused human being trying to make it in the world. That’s what’s interesting about this book. It actually feels like you’re reading the first Superman story ever made. Hopefully DC learns from its past mistakes and makes this latest origin definitive. Otherwise, all that was accomplished with the story will hold no value. What this book does best, is show that it’s never too late to fall in love with Superman.

Mark Waid and Lenil Yu’s Birthright is also a very touching Superman story. Follow Dustin on Twitter and ask him anything on FormSpring. Keep in mind I haven’t watched Smallville since season three.