Following a semi-game changing premiere last week, Supernatural had its work cut out for itself when “Hello, Cruel World” came along. After spending four months thinking that Castiel was going to be the new big bad for the year, as a ruthless god-like figure, mostly all viewers would have been shocked when that story was put to bed by the premiere’s end. Instead, we learnt that Purgatory wasn’t just a hang out for the souls of evil, but rather some of evil itself. More specifically, the Leviathan. Touted by Death as the first monsters ever created, the exceptionally powerful Leviathan took control of Castiel at the end of last week and that is where we picked up this week in the third part of an ongoing arc.

Much like the souls previously held within Jimmy’s body, the Leviathan found themselves unable to be effectively contained and vowed to return to finish off Dean and Bobby before leaving to find somewhere else to go. Regrouping, Dean and Bobby quickly found the previously missing Sam, who was in the midst of another Lucifer induced hallucination, and caught up with the Leviathan just in time to see Jimmy’s body disintegrate and the evil creatures make their way into the local water supply. Dean had a short moment of grieving for his almost certainly dead friend before the three headed back to Bobby’s home to formulate a strategy. With Leviathan feelers out there in the hunting world, everything slowed down a bit while Sam explained what was going on in his head.

Mark Pelligrino’s return as Lucifer was brief last week, but he had quite a bit of very welcome screen time on Friday to really flesh out the disaster in Sam’s mind. Meanwhile, Dean and Bobby tried to figure out how to cope with the ailing Winchester, as the Leviathan - having used the water supply to take control of countless people around town - put their plans into motion. As evil as they have been made out to be, those plans revolve entirely around getting fed. After some of the Leviathan massacre a bunch of high school students, Dean heads out to investigate whilst Bobby stays behind on protection detail. In a rare moment for Supernatural, we then see two of the seemingly senior Leviathan discuss the inner politics of evil and keeping under the radar.

In an effort to follow their boss’ order, the Leviathan then integrate themselves into the staff of the local hospital after noticing that people die there all the time without arousing suspicion. Unfortunately for them, Bobby’s friend Sheriff Mills happens to be in the hospital for an appendectomy and catches onto the Leviathan when she sees her surgeon eating a woman’s organs. In between Dean’s investigation and Sheriff Mills’ fight to stay alive so that she can call for help, there are two fantastic scenes between Lucifer and Sam in which Lucifer begins to plant the idea of suicide into Sam’s head. The toying with Sam’s reality then goes into overdrive when Bobby is called away to help the Sheriff out.

As Sam contemplates suicide thinking that it may be the only way to get Lucifer out of his mind, the Devil, posing as Dean, shows up at Bobby’s and asks for Sam’s help with the hunt. Devil Dean then plays more and more on the notion of Sam having no way out before revealing his true identity and getting Sam firing at thin air. After finding that his brother is no longer at Bobby’s, the real Dean uses Sam’s GPS to track him down and then, in the best scene of the episode, breaks through to his brother using his experience of Hell to relate. Teaching Sam the difference between real pain and what Lucifer is doing to his mind, Dean gets Sam refocused before they get a call from Bobby about the Leviathan at the hospital. 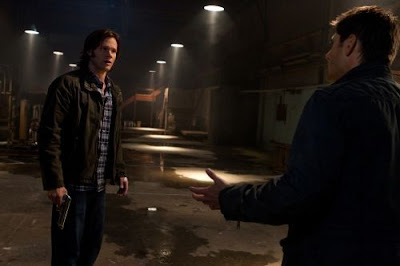 Returning to Bobby’s, the brothers find his house burnt to the ground and absolutely no sign of their friend before being attacked by one of the senior beasts. When a shotgun fails, the brothers resort to dropping a car on the monster’s head before Dean is forced to call an ambulance with the two of them in worse shape than ever. Sam comes to in the ambulance before going into shock upon seeing Lucifer again and as the brothers head to the Leviathan controlled hospital, the episode concludes by revealing that even big pieces of metal can’t finish off the oldest monsters in the book.

“Hello, Cruel World” was an interesting step for Supernatural to take following its season premiere. The episode was fairly light on story and acted as more of a setup for next week, instead focusing on the ability of its main cast to act. The scenes between Jared Padalecki and Mark Pelligrino were a prime example, with the three-way mind fight also involving Jensen Ackles taking the crown. Now two episodes into the season it’s still difficult to say exactly where this story is going, but with the boss Leviathan remaining an unknown entity and Bobby missing, there is still plenty of material for the writers to work off of.