Supernatural – The Girl Next Door

Twenty-one episodes after having the helm of the 108th installment of Supernatural (“Weekend at Bobby’s”) put into his hands, Jensen Ackles returned to the other side of the camera for his second directorial effort in this week’s “The Girl Next Door.” Before getting into the who, what, where, why and when of the episode itself, I feel that it would be appropriate to speak of Ackles’ performance as a director. For only his second attempt at being in charge of anything, let alone a show that he is an integral part of on the other side of the camera, the man has some skills. I went back and watched “Weekend at Bobby’s” before taking in this week’s episode and both are indistinguishable from any other episode of the show. By that I mean that a complete rookie has managed to seamlessly integrate his efforts into a show usually directed by veterans of television.

His style is noticeably different in a few scenes of this week’s episode in particular - with some instances of a first person view from Dean’s perspective - but even his own personal touches were perfectly applicable to the situation at hand and would likely have been used anyway were someone else directing. With that out of the way, this week’s episode...

Last week left us on a cliffhanger of sorts as Dean and Sam, having just narrowly survived a run in with a Leviathan, were being rushed to a hospital that they knew to be infiltrated by the very creatures that they were hunting. With Bobby’s fate also an uncertainty, his almost immediate arrival to get the brothers the hell out of Dodge was an extremely welcome thing for both me, as a fan of the character, and Dean. What with his broken leg, the elder Winchester wouldn’t likely have been able to do much day saving by himself. After the hospital breakout that highlighted the aforementioned directorial choices, the group laid low in a Montana cabin whilst the brothers healed up and networked to other hunters who were having run-ins with the Leviathan. 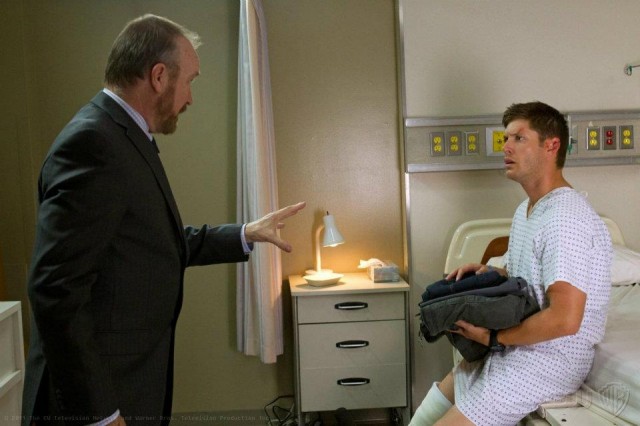 After receiving the news that the Leviathan were setting up shop all over the country and that absolutely no one had any idea how to kill one of them, Bobby set his sights on retrieving his book collection. While his house and its contents are now a pile of ash, Bobby’s cautious side led him to make copies of every single one-of-a-kind book that he had in his library and put them in various hidden places, presumably within his home state, but possibly countrywide. As Bobby went after the books to try and get a line on how to kill the Purgatory spawn, Sam - being the only one of the two Winchesters capable of walking - headed out to get supplies. During his shopping trip, Sam came across a newspaper article that gave him a blast to the past and set up the remainder of the episode.

Through a series of flashbacks, we see Sam working the research end of a hunt that Dean and John were on in 1998 Nebraska. After identifying their target as a kitsune (a humanoid creature that requires a steady diet of human pituitary glands to survive), the youngest Winchester had what appeared to be his first real run-in with a pretty girl. As he hung around the library, Sam eventually discovered that the kitsune could be killed with a knife to the heart, before asking his brother’s advice on how to talk to girls. Although his advance was initially shot down by the object of his affections, Sam eventually got in good with the beautiful Amy after saving her from what appeared to be the onset of a rape by two teenage boys.

We then got to see the two bond as Amy tended to Sam’s battle wounds, where it was revealed to us (but not yet him) that Amy was really a kitsune. The two then developed an attraction over their mutual hatred of their respectively isolated and nomadic lives before sharing a kiss. Not long after, Amy’s mother, the object of the Winchesters’ hunt, arrived home, forcing Amy to hide Sam to save his life. As Sam figured out the truth of what Amy was, the deception failed and her mother moved to kill Sam before Amy committed matricide to save him. Unable to kill her after she had saved him, Sam then allowed Amy to leave, presumably taking credit for killing her mother when John and Dean arrived.

Intertwined with the flashbacks, we see present day Sam follow the leads of the case from the newspaper article, putting him on a collision course with present day Amy. Although their initial meeting results in Amy fleeing, Sam tracks her to her house where Amy pleads for her life. As she explains to Sam that she now gets her required eating from her job as a mortician, Amy convinces Sam to once again let her go when she reveals that she only killed the recent victims to save the life of her son. Having worked out what his brother was up to, Dean tracked Sam to the hunt and the two had a familiar conversation about the degrees of freakishness before Dean agreed to drop Amy’s case in a show of trust to his brother.

Dropping Sam off at a hotel, Dean then tracked down the now on-the-run Amy and somewhat predictably, but shockingly, killed her anyway. With her son having yet to kill, Dean simply left him with a warning that he would kill him, something that the young kitsune reciprocated. The episode then concluded with one of the Leviathan - having infiltrated a credit card company - tracking Sam’s movements to the store where he bought the newspaper and, after informing one of the seniors of his race of his progress, eating the attendant, noting that “everything is better with cheese.”

Despite taking on a slightly unusual storytelling style, “The Girl Next Door” was a very good episode of Supernatural. The limited flashback scenes throughout the show’s six season run have always been a highlight and this was no exception. More importantly, the tension between Dean and Sam was played very well, as Dean’s distrust of his brother’s mind led to a strong close to the episode. With both the Leviathan and Sam’s internal fight becoming continually focal, the season is looking in very good shape despite initial speculation that it would have no real direction in which to go.