If Robert Kirkman wasn't writing enough as it was, he has written another mini-series with Superpatriot: America's Fighting Force. First appearing in Savage Dragon #2, created by Erik Larsen, he has frequently appeared in the Image Universe mainly as a supporting character; now he is once again in the spotlight.

The story starts with Superpatriot saving his children from an abduction by some men with Nazi markings on their uniforms. There is then a quick flashback before his android days during WWII, fast forwarding to his more recent crime fighting days. The volume is laced with more flashbacks whilst at the same time Superpatriot is trying to make progress with his personal life. Throughout the rest of the volume, in a very large nutshell, the Nazi men are trying to gather forces bringing back certain ways of Hitler and declaring war. 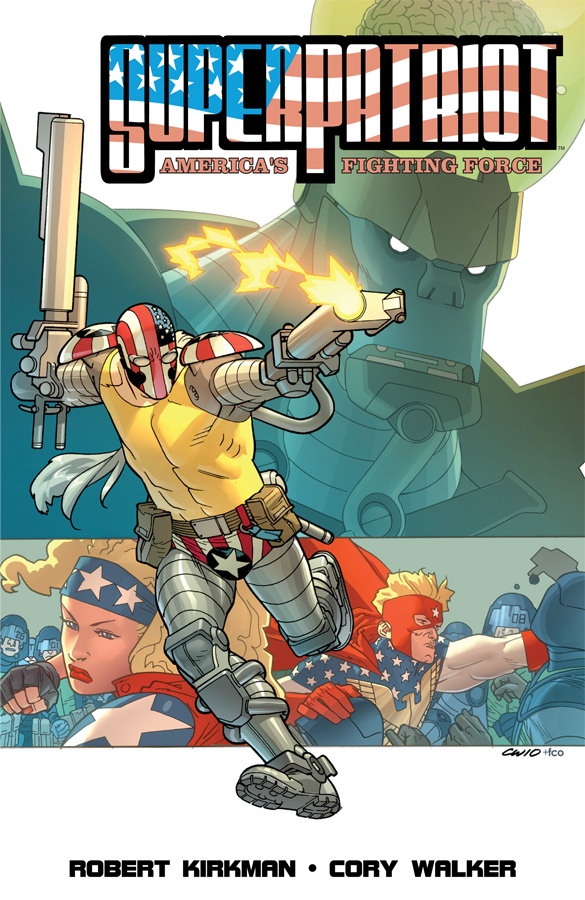 Robert Kirkman, a man that has been very active for the last almost decade, again impresses with his simplistic yet entertaining style of writing. Kirkman blends the testosterone-filled action with drama quite well, though it is just like his work with Invincible. His writing does not feel that it has evolved too much, yet what Kirkman does, he does well.

Across all four issues, Kirkman does not struggle with the pacing. This is a skill that he has wielded for a long time since the beginnings of Invincible, yet has still worked on improving. Just how far he has really come is obvious in this collection. The easiest example would be the use of the flashbacks. A lot of writers struggle in this area in that they just cannot seem to fit these in at the right times, which often makes a comic feel jerky with the simultaneous timelines. Kirkman avoids this pitfall with a long length of vine left over to leave that issue far behind, (get the reference?).

Cory Walker has worked with Kirkman previously on Invincible and Destroyer (part of Marvel's MAX line). Walker is an artist with simple artwork. He does not go over-the-top with detail, like what is seen with hyper-realism, but he brings the raw basics loud and proud with the reader's eyes always floating to the right spot of the action. Another thing worth mentioning is that his quality stays true and does not drop off further down the line.

Val Staples, Matt Tyree and Jason Keith were in charge with the coloring of these comics. The colors are of a basic palette but are bright like a Disney cartoon and pleasing to the eye without the feeling of being attacked by paintbrushes.

Honestly, to anybody who is a fan of the character Superpatriot, or even somebody who wishes to be a complete collector of Savage Dragon or the works of the people behind this story should get in on this. I do recommend this series to anyone who likes action laced with light-hearted humor. Worthy of mention is that Robert Kirkman's Superpatriot feels true to the character's beginnings. Oh, and one other thing: being Erik Larsen's character and also being the editor he still had a hand on his creation.