Remember the first Supreme Commander? Remember how big and massive the game used to be—gargantuan battles that made a difference, air fights with fleets the size of Washington to Chicago, and maps that dwarfed any strategy game to date? Well, the sequel gets all that in spades... but what is the game missing that disappoints the average Supreme Commander fan? What is that ill-definable trait missing from this once intriguing, mind bending strategic master piece? 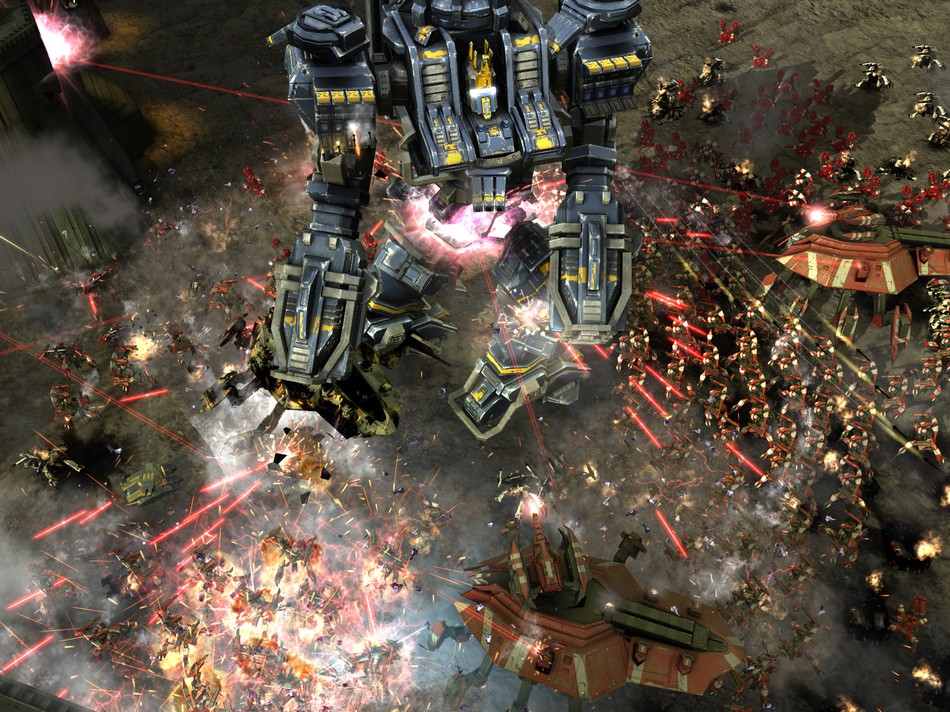 The story starts you off after the events of Forged Alliance—thirty or so years of peace then the President of the Union gets shot… big shocker. After all the meat of story reels into the game, the story grinds into a halt, sucking you into a story that couldv'e been so much better. You begin with the UEF with the story as Dominic Maddox, who’s occupation seems obvious (you’re playing Supreme Commander, do I really need to tell you what he’s doing?), he kills a bunch of aliens (Cybran and Aeon) and gets all emotional about his family… then you move into the other races, Aeon Illuminate, and the Cybran. All three races are woven into an incoherent story that doesn't suck you in to the "emotional driven story," they speak so generously about. They are all friends at the academy and basically you’re supposed to feel sorry. The characters and the voice acting grate and detract from the experience and you'll likely just ignore the single-player in favor of the better skirmishes... although it doesn't hold much in the way of lasting value either if you are a seasoned SC player.

The skirmish you'd think as the average Supreme Commander fan is where the game picks up, but that really boils down to your experience with the first game to how much you may enjoy this version. If you were a fan of the first game, you'll be thoroughly disappointed by the ease of which this game takes itself as. Dumbed down to the point of where the game just really doesn't require "strategy." You want to win? Mass units and rush, the AI doesn't help as they just send wave after wave of air units to crush you—just have some anti-air and you’ll be fine. The amount of strategy is dumbed down because the simplicity is just too much. The thing that made Supreme Commander great was how intricate much of the strategy was. To be clear, there were three tier levels of units that you could create and the strategy added to the gameplay was whether or not to build the expensive yet extremely useful walkers/tanks or stick with mass produced tier one/two units. The same thing boiled down to defense. However in the second one, they got rid of such a build and went with one mass produced unit--your tier one, two, and three tanks were replaced by one main battle tank, everything is the same as with the artillery and AA guns, one coherent unit to do the job.

This build made the game go much faster—no longer will you have to stay glued to your monitor for more than an hour—but this killed the strategy as you need only one unit to do the job, you could just as easily win with one hundred and sixty tanks if you really wanted to. The variety of units you could build killed in the flames. Let me take a rundown of the first Supreme Commander and how the units worked together. First tier were the weakest tanks, but they were the fastest to build—if you built enough of these, you could take down fleets of destroyers in seconds. They also served as nice distractions for multiplayer battles—a strategy many veterans used was the have fleets of tier one haul over to one side of the tier three defense force to move the defense, then walk in with nothing but an iron fist of siege tanks (if you were the Seraphim). Another detriment made when they shortened the game times was the trademark experimentals took a strategic beating (in other words, they just aren’t as useful as before). Remember how long each experimental took to build? Remember how difficult it was to kill them? Remember how satisfying it was to use them? Well, that was wounded in the flames as many of the units from the first game died in the making,

only a few made it back.

The Fatboy made it, but it's not as useful as it once was—now it’s just a battleship made for land, no longer is it a strategic asset to you. Remember how it was able to make units three times faster than a tier three factory? Using it as a mobile factory and setting up shop outside your foes base for a preemptive strike? Well now it's just another tank you can mass produce within three minutes (yes, all experimentals are now able to be built by a special building, all under three minutes). The Megalith made it, but like the Fatboy it's just another unit you can mass-produce. The famous one eyed monster made it (the Galactic Colossus) and yes it’s powerful, but like every other experimental taking it down is a piece of cake… saying if you have enough tanks. I think you get the point about experimentals. But not a bad thing at all, they did add in some new... thoughtful units that don't exactly make themselves useful in the long run. The dragon robot (only useful at close range, and even then doesn't stand a chance), the experimental anti-air gun for the Aeon, the experimental teleporter, the experimental magnet for Aeon (not good), the bomb bouncer (not good at all for what it's worth), the list goes on and on for experimentals that just aren't useful enough to warrant the heavy cost they need--and besides, many of the experimentals are too easily destroyed, further questioning their usefulness. The strategy to taking experimentals down in Supreme Commander 2 are the one and only (perhaps the easiest, bombers cost a bit too much) tank rush. Send them in to where the walker maybe, and that nasty bugger will be gone within a matter of seconds.

If you are a fan of the original, you might notice these fault that this version falls into. The resource model you might notice as a bit odd. Remember how the resource model worked before? Where you can build as much as you wanted as long as you didn't exceed what the Mass extractors were dishing out? Well that was taking out in favor of the standard rake and make resource model. Now you can't mass produce units in an unlimited fashion, you have to make sure you have enough resources in order to make that army you need to destroy the opposing force. Another one you might notice is the research tree--while a noble goal, it takes away the variety the first one had. Basically it upgrades the base model of the tank/artillery/combat plane/etc from weak to strong. Gives you experimentals and nukes, but even then they can be taken down rather easily with tanks, gunships, bombers, and anti-nukes. Artillery pieces now don't serve a good purpose which might anger a few people. The reason it is so frustrating is because the shots are too inaccurate and much of the damage it inflicts is just so low that building it feels more like a chore than a strategic asset. It’s good for those attrition wars, but artillery pieces can be taken down easily by shields of mass tanks.

Moot points that I would like to bring up is both the engine and the map designs have gotten a complete overhaul. The engine itself isn't super powerful but it does a great job of rendering most of the sharp looking battles, but doesn't do so with such aestheticism, instead opts for more reliable engines that will not crash and that perhaps will run very smoothly on many systems out there. Maps themselves are neat looking, but rather small, this accounts for the small unit count of five hundred. While only one map from the original (Setons Clutch) made it back from the original, the new maps are serviceable and are somewhat fun to play on. Sound design does a good job of emulating the cacophony of what the original was all about—tank battles, the echo of a nearby artillery gun, the satisfying mushroom cloud of a nuke all sound phenomenal in the sequel. Although the voice acting again is rather grated and will make you nod in dismay at how terribly it was directed. The story had its potential, but old story mechanics, dated voice acting, and predictable plot points all add up to a mediocre story that may satisfy a few.

Multiplayer was like a giant chess battle in the original where huge fleets could patrol an area, mass tier three unit armies could stomp upon puny tier two tanks, and where the maps were so big you had to send a spy plane just to map what they are doing. Well this game has been dwarfed in comparison and the strategies you learnt in the original now have to be tweaked to match both, the style, resource model, and research tree of this sequel. The original had long stalemate ridden battles that would go for over three hours (if both players are well defended), till one managed to build a game ender (a Mavor artillery piece, a Seraphim nuke—any artillery piece really). This game manages to clock in at an hour max usually—even with well defended bases, you can just send a mass of tanks and artillery pieces to deal with the one s

et of turrets that defend the base. Even with experimentals in the play, the game just seems to grind to a halt as the experimentals can't hold themselves together if a series of tanks come into play. They'll last a few seconds before getting themselves killed—unlike the original where things like the Fatboy mobile factory could last a while against an array of tanks (tier three or not). While the game is great for beginners alike, for many Supreme Commander Fans, you are best to avoid playing this game if you liked the complexity of the first.

This game isn't all bad, it makes it easy for newcomers to get in to this game and I believe that is what Chris Taylor was going for. Actually when you take a step back and look at it all, it shouldv'e been this one first, then the first Supreme Commander 2nd, but just putting that out there. However the fan base he once had best stick with the original Supreme Commander instead of playing this as it is way too simple to satisfy that itch you always wanted when you played the original, that itch of being a supreme commander obviously. If you liked the strategy of the first game (contemplating between which set of units to build, tier one, two, or three, or trying to manage your mass resources, etc, or how to take on that mighty Galactic Colossus, that flying saucer, gunship, etc), then you may want to try this game, but do so with a grain of salt.