Tales From The Borderlands: Episode 1 Review

Remember when Telltale Games released that terrible Jurassic Park game? Since then the studio has been on a roll, starting with their Walking Dead episodic series. And with each season and each game it seems Telltale Games gets better and better. Tales From The Borderlands is no exception, it runs better, looks better, plays better and tells a story in a more interesting way than any previous Telltale Game has.
That might be the most surprising aspect of Tales From The Borderlands. The story and characters are really good and actually feel like real people. This is surprising because this game, as the name implies, is set in the Borderlands universe. A universe that has enemies named Bonerfarts and crazy robots who dance and get sad. The Borderlands series has never been great at telling a story, but to Gearbox’s credit the games have a unique look and style to them. This style, along with Telltale’s ability to write good dialogue, combines to create a fantastic starting episode for this series.
The basic premise is that you get grabbed by a dude in a gnarly bandit-looking suit. He ties you up and tells you to tell him how you got here and what you are doing. It’s a framing device that feels a bit contrived. Luckily it seems everyone else realizes this as well. Throughout the game characters make jokes about some of the too convenient moments. It never gets to an absurd Saint’s Row level of meta-humor, but it was a nice nod and wink to some of the more laughable moments.
So, you are tied up and forced at gunpoint to explain how and why you are on Pandora, the same planet from the previous Borderlands games. (Those were shooters with loot, not story driven adventure games.) Your name is Rhys. You work for Hyperion, the big bad corporation from Borderlands 2. Also tied up is Fiona, a Pandora native who is a con artist. These two have some good reasons to not trust one and other. 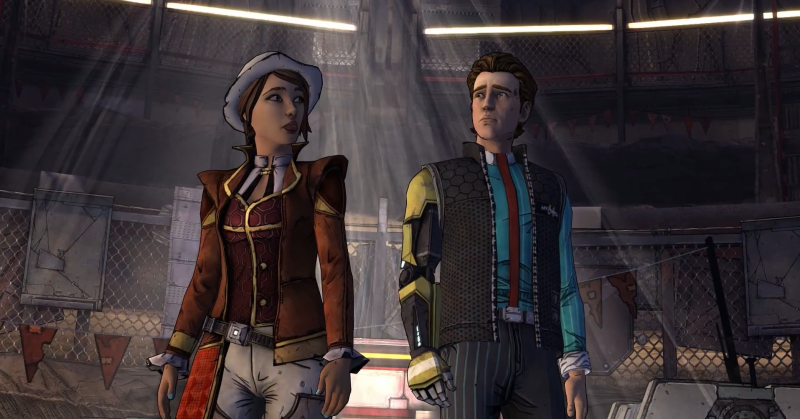 These are the main characters and throughout the game you switch between them and see events from multiple angles or watch as they both lie and make stuff up, usually calling each other out for it. It reminded me of a great game that came out last year, Call of Jaurez: Gunslinger. That game and Tales From The Borderlands both do some neat things with the game changing as someone else tells the story or points something out.
Throughout the first episode you see both sides of a con and there is a real sense of tension in a few scenes. Like one where Fiona is quickly told a bunch of info about her identity. You then have to remember what you were told and lie your way through an extremely important conversation. I remember feeling really nervous and afraid. Like previous Telltale games, every time you say something important or make a decision the game gives you that “.....will remember this” message. A constant reminder of the permanency of your actions. I still don’t know if I made the right call on a few decisions and there were a few moments were after hitting a button I felt a serious pang of regret. 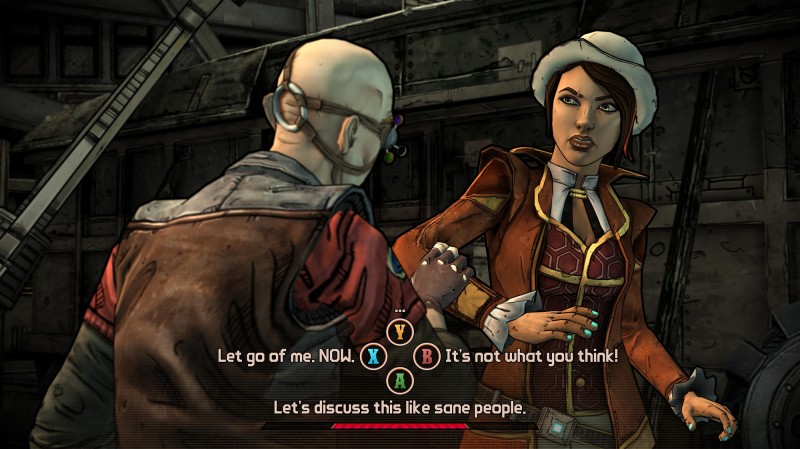 It’s these moments that I really loved. When the game was playing around with the narrative and jumping from past to present to past etc. It never felt confusing and was always put together in such a way that I understood what was happening. Tales From The Borderlands uses these unreliable narrators and timeline jumping to do some cool things. For example, there is a moment where I did a few things and felt like a badass. I was able to get what I wanted, talked someone into doing what I needed and felt pretty good about myself. But, later I see the events that led up to and happened during that moment and realized how much of a idiot I was. It was a nice moment that instantly felt different than anything Telltale has done before.
I won’t go too much into the story, as that really is the biggest appeal for these type of games. The gameplay in this isn’t bad, it’s just not super impressive. You move the stick certain ways, mash a button a certain way and sometimes aim and hit a trigger to do a certain action. It all feels better than previous Telltale games, but that had more to do with the fact I played this on an Xbox One. On here I didn’t have the framerate drops, clunky animations or weird stuttering that plagued the previous Xbox 360 and PS3 Telltale games like The Wolf Among Us. It wasn’t a perfect experience, I had a few hiccups here and there, but for the most part it ran smooth and looked great. 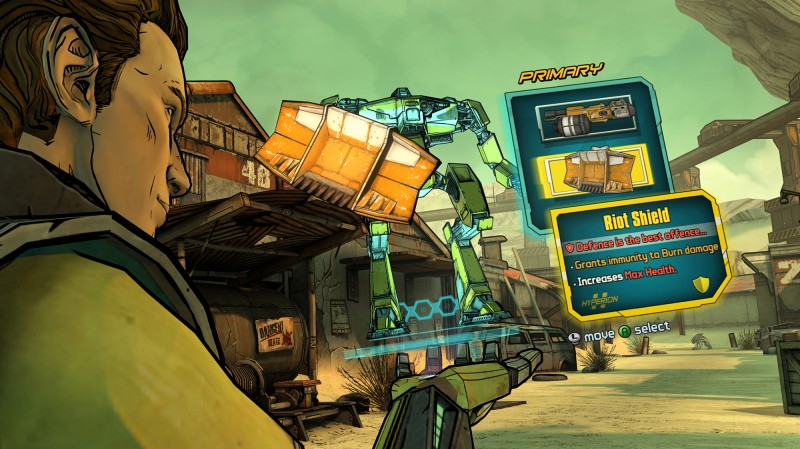 It really looks like a Borderlands game, that cell shaded-ish look and the new characters and locations felt like they belonged in this strange and violent world. But beyond those more obvious visuals, you will find even more Borderlands DNA. Menus look like the menus from the other games. Enemies and loot chests can be found. Money and other objects have a bright and narrow pillar of colored light emitting from them. This really does feel like a game in the Borderlands universe.
Now, if you looked at this and thought “I’m not a huge Borderlands fan…” I would say this: If you enjoy the Telltale games like Wolf or Walking Dead, than you should get this. While you might not get a few jokes or references, the vast majority of the game is separated enough from the previous games to let new players enjoy the story.The characters you encounter are almost all new, so non-Borderlands fans should be able to enjoy it without needing a wiki. By the way, humor is hugely subjective but I found most of the jokes here to be less Borderlands 2 “internet meme” jokes and more story related/character related. Again, humor is subjective and this is certainly a game set in the Borderlands universe, so if that style or world doesn’t appeal to you at all, then maybe this won’t be for you.
If you are a Borderlands fan, keep an eye out for little references and jokes that only huge fans will get. Some are pretty good and some are really obscure.
Tales From The Borderlands: Episode 1 is a great starting place for this game. It setups an intriguing plot and I honestly can’t wait to see what is going to happen next. How will my decisions change the story? Did I make the wrong call when I shot that one person? I’m not sure who I can trust and I’m not sure what is going to happen. That is a pretty exciting feeling. I can’t wait for more. Let’s just hope they don’t follow the Borderlands tradition of having terrible endings.
Rating
9.0
Pros