By: | Comic Features | March 24, 2011
One of our many goals at PAC (that's Player Affinity Comics) is to reach out and talk to inspiring creators in the comic industry. If you're not familiar with Kickstarter it's a system that allows people to fund projects of all types. What's happening more and more is that comic creators are going to Kickstarter to fund their books. I had a chance to do some Q&A with Gerald Cooper the creator/writer of Genecy, you remember that first issue we reviewed on the site? If you'd like to see more of Genecy then swing by the Kickstarter page (link below) and check out what they're offering to their backers. Without further ado here's my interview with Gerald.

You've described Genecy as Conan/Silver Surfer if he had been raised on Apokolips, were those elements the inspiration for the character/story?

In my opinion, people are going to compare Kaizaxx to Conan and Genecy to the Silver Surfer and so would I, probably. The entire planet Apokolips is run and owned by one being who is feared throughout the known Galaxy and when I finally introduce that type of character to the series, it will blow your mind! But Conan, the Silver Surfer and Apokolips actually weren't elements of inspiration for me - but then again ... 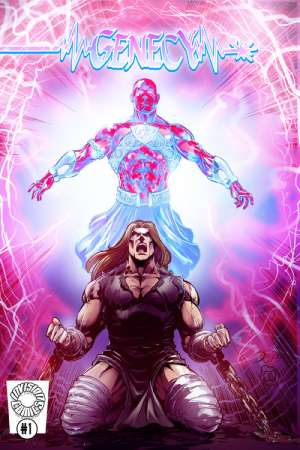 What were you're comic influences when writing the story?

Much of Tolkien, Rothfuss, Starlin and Wolfman. There are others. Many others.

How did you end up working with Eddie Barrows?

We started searching all over the cosmos for a realistic artist via the internet. We found Eddy before DC did! Once he signed with them we had to continue a desperate search for an artist who could fill those shoes. We found that in the amazing Diego Bernard! Diego is one of the very best artists to date. Watch and see!

(LOL!) When people go to http://www.kickstarter.com/projects/genecy/genecy-2-the-cosmic-theatre-continues?play=1&ref=search  and get past my funny face, they'll see that I have to pay the pencil artists, the colorist and the letterer. That's after I pay the mortgage payment, the gas and electricity, water and gas now is what ... almost four dollars! My hope is that we could get a little help to complete the second issue and start the third.

What's been the major difference of choosing Kickstarter versus the way you released the first issue?

I paid for everything to get the first issue done. I'm so glad that my wife is on my side!

Who would win in a fight Stan Lee (in his prime) or Jack Kirby (also in his prime)?
I shall gladly span the far horizons and with innocent eyes, seek that which dwells far beyond the hidden veils of the galactic! I shall marvel within the amazing and unassailable entrails of the ethereal! I shall experience a grand and cosmic theatre of wonder and surprise! For the secret power advances towards us with but one goal! With one purpose! To see that that we ride upon the sea-like wind currents of the ever expanding! For thus begins the reign of InVision Comics! Let the Ride Divine begin! Ugh ... what was the question again?

I would like to thank Gerald for taking the time to talk with us and we wish him the best with Genecy #2 and we encourage everyone to stop by the Kickstarter page and support the second issue.