There has always been a strong divide between PC and console gamers. Console gamers seem to like the simplicity and ease of use that their consoles provide while PC gamers love the freedom and control they have over their gaming. A common reason why many PC gamers stick with the platform despite the many alarmist claims that the PC gaming market is dying is the strength of the mouse and keyboard control scheme. No joystick will ever come near the precision and control that a mouse can and with a keyboard it's almost impossible for a game to be limited by the number of buttons on your controller. That’s where the Razer Switchblade comes in. Razer has tried to fuse the best components of the PC gaming, console gaming and handheld gaming experiences with their experimental concept gaming device, the Switchblade.

The Switchblade is a small laptop with a 7-inch screen and is powered by the Intel Atom technology, but where the Switchblade separates itself from other laptop designs is in its unique screen which is very similar to the Optimus Maximus keyboard. Each key on the keyboard of the Razer Switchblade is actually a small screen which displays an image of whatever the key is used for and each keys' purpose can be customized by the gamer and the keys will change themselves to hot-keys for whatever game you happen to be playing at the time. For example, if you were playing Starcraft 2 on the Razer Switchblade, rather than navigate through build menus you could simply quick-select the structure you want to build using the key for it on the Switchblade's keyboard and rather than attach all your spells and abilities in World of Warcraft to bars on the screen, you could attach them to keys on the Switchblade's keyboard. 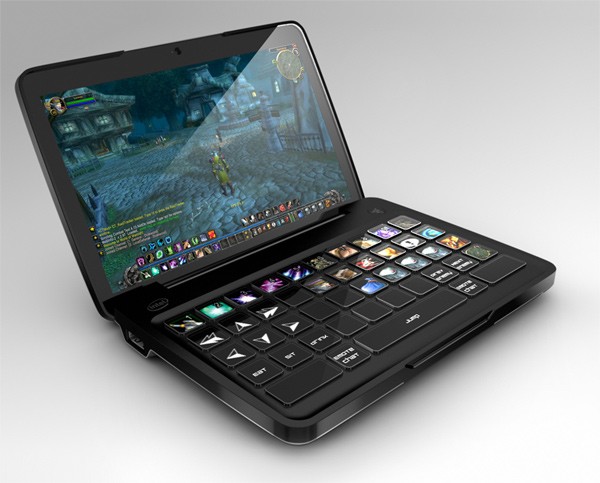 The Switchblade also incorporates a touch screen which has multitouch technology built into it, giving PC developers the same control systems and tools that have led to numerous quirky and innovative games on the DS and the iOS Appstore. While the exact specs of the Razer Switchblade have not been announced or confirmed, one can assume that since the Switchblade has been shown in popular action running e-sports titles like DotA and Starcraft 2, the specs will be fairly good.

While the Switchblade is going to be running PC games, it utilizes a very console-esque interface designed by Razer. The interface shown in the demonstration video shows users are able to select their game of choice using a touch-based interface, and from the looks of it the interface also allows users to select and view music and videos as well as search the web using a built-in internet browser. Some PC gamers might not like the home console feel of the Switchblade's interface and hopefully Razer will include the option for you to disable it in favor of the Windows 7 OS that the Switchblade runs on.

The information that we have heard about the Switchblade so far has been very little since it was shown at CES earlier this year. While the odds of us getting the actual Switchblade prototype are fairly low, Razer has said that they are working with several partners to produce some new products based off the design. I think the ideas behind the Switchblade are quite cool but the design success will be very much based on what base support the Switchblade's unique features set.