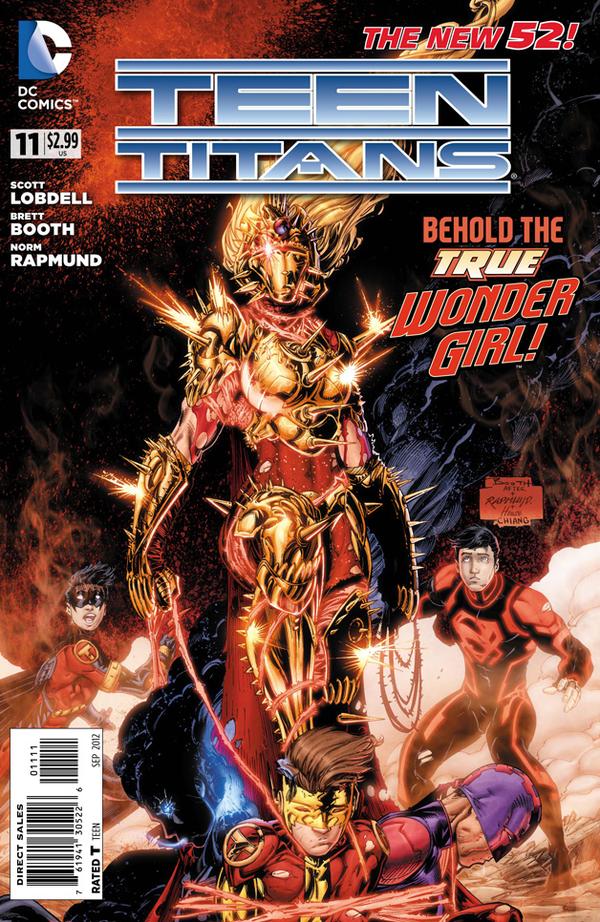 Some series for the New 52 have not really changed all that much from their previous series. Teen Titans is not one of those. Teen Titans is probably a series that has changed the most from the New 52. I like to pick up it up every once in a while so I got this issue on a whim.

The cover for this issue is what made me want to pick up this issue at whim. Wonder Girl is one of my favorite superheroes, and by the looks of the cover we were finally going to learn a little bit more about her character.

In this issue, Wonder Girl fights against her armor. Will she be able to control her armor or will the armor end up controlling her?

Teen Titans has been a very disappointing series for me. The New 52 has change a lot of our favorite teen heroes, and not for the better. For example, in the New 52 Tim Drake was never Robin and Wonder Girl has armor that gives her powers instead of her having the powers of Wonder Woman.I hope that we get to see these characters grow to become likable characters, but will fans of these characters fall in love with them all over again. That is going to be the struggle that this series is going to have to find an audience with long time readers. So, it is kind of hard to read a series where your favorite characters have changed so much for the worst instead of for the better. But I still like to pick up this series on occasion if the issue looks interesting. This issue looked interesting to me because I thought we were going to learn a little bit more about Wonder Girl’s armor, and learn more about her character.

This is more of a filler issue. We don’t really learn anything about Wonder Girl’s suit. We just know that Wonder Girl is losing control of the armor. We get to see her struggle for control. This issue leaves on a cliffhanger that makes you want more from the story. It makes you wonder if Wonder Girl will take control of her armor, and if she doesn’t will this hurt her friends on the Teen Titans team.

I have never been a big fan of the art, but it starts to grow on you if you read enough issues of the series. It is far from the best art I have seen for these characters, but it is tolerable.

If you are a fan of Wonder Girl’s character in the New 52 than this is worth picking up. Even though this is a filler issue it seems like that we might get an interesting story with Wonder Girl’s armor in the next issue.