Terriers has a great first episode and the possibility of a letdown in its sophomore outing was high. I am happy to say that this is not the case and I think that this second episode, Dog and Pony, is stronger than the pilot. Last week was spent introducing the elements of the world, while this week was about delving deeper into the character relationships that will become the driving force of the show.

The relationship between Hank and Britt is a very interesting one. Last week I had questioned the circumstances that brought them together and, while not answered this week, more light is shown on the situation and in doing so makes Britt far more interesting than he appeared to be. It is inferred that he had a troubled past but just how bad he was, how he changed, and whether or not Hank helped him remain unanswered all the more intriguing. The two actors have such amazing chemistry which, only two episodes in, is a pretty big compliment. Their interactions never seem forced and the quick jabs they take at each other are both humorous and serve to strengthen their partnership.

Hank is one haunted guy. We learn that he was dishonorably discharged from the Ocean Beach PD, his wife left him after she had helped him get clean, and that he still dreams of reuniting with his ex wife. Buying the house they shared together, is just another way for him to hang on to the hope of getting back together. At the end of the episode there is a powerful metaphor for his feelings after his ex wife leaves to join her new fiancé.

The episode picks up soon after the pilot with Hank and Britt giving depositions to the police and the lawyers for the realtor they busted in the pilot. There is not a lot of development on that storyline, which make me think that maybe he won’t play the villain in the show and this was merely a means to ignite Hank and Britt’s business as private investigators. The gun that Britt planted in his house that led to the conviction comes up a few times in the episode, so it is possible that that character will come back later.

The pair are in desperate need of money as they cannot get the check from the first episode because it is evidence. Hank steals a wanted poster from the police department and they attempt to bring the fugitive in for the reward. Needless to say, it cannot be that easy. They get caught up in a much bigger crime but one that ultimately leaves them with the money they need. 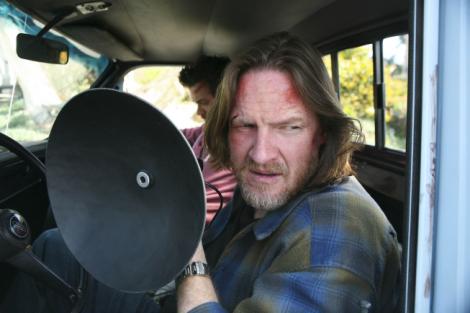 One of the funnier subplots deals with Britt and his wife getting a dog, whom they both come to hate.  My question is why does his wife stay with him. She is studying to be a veterinarian and seems pretty intelligent, Britt is, well he is Britt. The way they interact though makes you care about their relationship and by the end of the episode I loved them as a couple.

The ending is pretty emotional and will make the lesser men cry. Hank usually feel a bit reserved and he keeps his emotions hidden. When he finds himself in his empty house reminiscing about the life he used to have we finally see him vulnerable. These scenes are hard to pull off but Hank is a better character because of it.

Terriers is off to a very strong start and I can’t wait for the next episode.