Some new shows take a while to draw you in, but others can do so in the very first episode. Terriers is in the latter category. The characters are quickly developed to the point that you care about them, and in the pilot episode they tell a story that is both entertaining and oddly emotional at times. Even with only having seen the first episode I can safely say that I do want to know more about Hank and Britt. While the episode, and I guess the show thus far isn’t without its problems, it does far more right than wrong.

The Pilot starts with our two characters; Hank a former cop whose leave from the force is not clearly given a reason, and Britt a guy trying to make money to start a family. We quickly find out that the two have a rather odd profession, with them making a dog-nap which is strangely reminiscent to the beginning of the first Ace Ventura film. Throughout the whole mission Hank is constantly wondering exactly why they are stealing the dog and Britt telling him it is for his dry cleaners. Ultimately we discover that Britt had a plan the whole time and the reveal occurs later in the episode which is pretty interesting. The dog becomes a sort of third partner in the duos private investigator business. 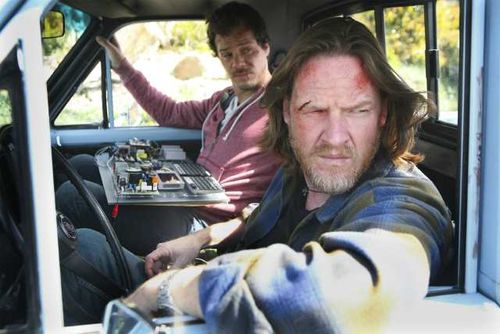 From there onwards the real thrust of the narrative is shown with Hank taking a job from an old friend who can't find his daughter. The father’s emotional plight is both sad and rather moving. Hank and Britt get caught up in something that is far outside their normal scope, going up against a millionaire housing developer and an assortment of hired thugs that ends with at least two men, one very close to Hank dying, and thus is the most moving part of the episode.

Throughout the plot development there is some rather well done character development. Hank has an ex-wife whom he clearly still has feelings for, and she is selling the house that the two shared together before they split. Luck would have it that Hank has the means to purchase the house thinking that it will help his situation but ultimately leaves him more depressed. The ex-wife storyline may not be the most original idea but it is handled well and makes Hank a more relatable and compassionate character. Britt is recently married and his wife is a bit rocky on his profession. Hank and Britt’s wives have an interesting relationship, one that was kept ambiguous and leaves me to believe that she is his daughter. There is no real evidence for this, but the implication is certainly there and would explain why Hank and Britt, two pretty different characters and people became partners. Hank also has an interesting relationship with his former partner on the police force, Mark, that could lead to revelations about Hanks past and lead to interesting plot development.

The Pilot is great and I am already sold on the show. The premise is interesting and characters are layered. There is a lot of directions they could take the show and I for one am willing and excited to see where they go.