At this point, can any Adam Sandler fan not be considered an apologist? Bring up Happy Gilmore and Billy Madison all you like, it's clear that the Sandler of the 21st Century could not care less about what you think of him. After an affable and promising performance in Funny People didn't break bank at the box office, it's like he decided that dignity and success were mutually exclusive. This meant starring in three of the worst movies of the last two years, and becoming a record-setter at the Razzie awards (last year he had 12 nominations…in 10 categories). To borrow a lyric from Old Dirty Bastard, Jacques Costeau could never get this low.

Speaking of (ODB, not Jacques), what's supposed to entice audiences into seeing another Sandler movie, especially after the audio-visual enema that was last year's Jack and Jill, is that That's My Boy is a hard-"R" raunch fest. Why that would matter makes no sense, since his heyday was in PG-13 territory, so it's not like this is some grand return to glory. All the rating bump does is give him an excuse to drop F-bombs and talk at length about his dick length, but in a wacky voice. Yay. 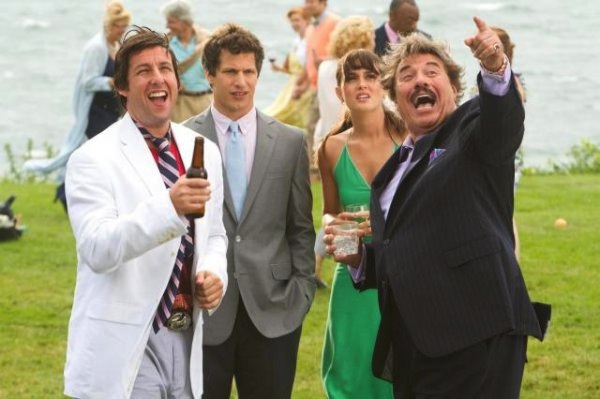 Assuming an accent that sounds like a Bostonian gremlin attempting baby-talk, Sandler plays Donnie Berger, a washed-up party animal who faced — and quickly ran away from — responsibility, having been saddled with a son that resulting from an affair with his 8th grade math teacher. You have to give writer David Caspe credit for boldness; can you remember the last mainstream comedy you saw that decided statutory rape was a comedic goldmine?

In the moment, they play with the idea that the barely pubescent Donnie can't put his money where his mouth is when Mrs. McGarricle (Eva Amurri Martino) returns his advances. But instead of giving the cocky kid exactly what he wants, only to have it ruin his life (which might create, you know, pathos), they take the low road and have said tryst turn him into a god. When Donnie and his teacher are discovered doing the nasty during an assembly, men, women and children give him a standing ovation, like he's finally fulfilled a societal Edu-cus complex by boning the schoolmarm. 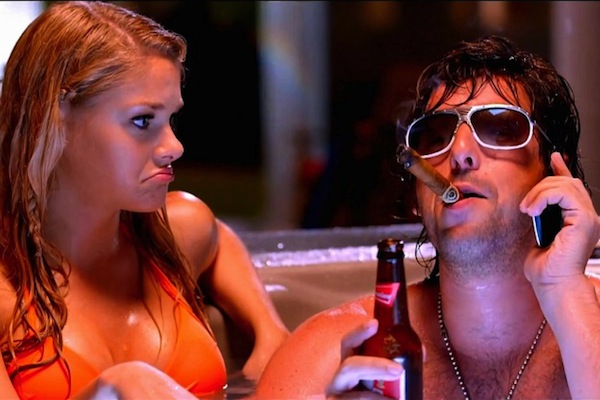 Like Jack and Jill before it, That's My Boy takes place in a warped, Twilight Zone-esque alternate dimension where people act like the utter insanity going on around them isn't just typical, but acceptable. Donnie becomes a rich and famous celebrity — not a tabloid target or a guest on Maury — because of his sexual conquest. Even once burnt-out and facing jail time over money owed to the IRS, he's treated as some kind of beer-swilling Adonis, with men saluting him and women dying to be with him. You keep waiting for the pullback to see that the whole movie is just the daydream of younger Donnie, but it never happens. This is a masturbatory fantasy parading around as reality.

When Donnie hits up his estranged son Han (Andy Samberg) for cash by crashing his classy New Hampshire wedding, you'd think this might turn into a snobs vs. slobs battle, but instead of Donnie embarrassing his son in front of all the rich folks, Donnie drags everyone else down to his level. There are no comedic straight men in the Sandler-verse, everyone is just waiting to cut loose and join in on the loutish antics of any misogynistic boor who happens to appear. Even for broad comedy, the film doesn't understand that the reason you have snooty rich people act snooty is to create juxtaposition for the jokes. Why is it funny for Donnie to talk about how hot Grandma is if everyone just sorta agrees with him without even batting an eye? 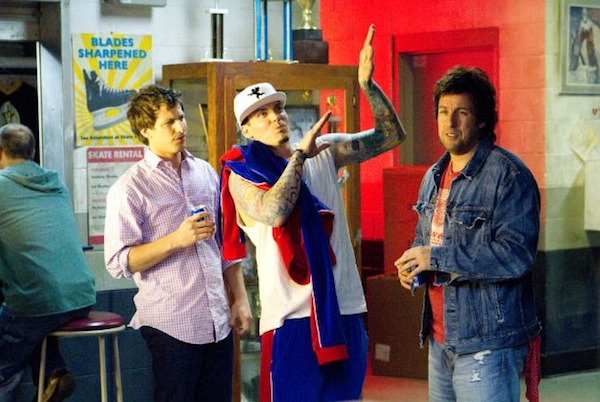 That's My Boy is a series of random and repugnant actions strung together by some of the most egregious product placement you'll ever see. Sandler is almost never seen without a name-brand beer in his hands, with him turning the label toward camera before taking a swig becoming a leitmotif. The apex of sponsor whoring has to be a revival of the Budweiser "Wazaa" ads featuring the whole cast, that they actually have the gall to do twice.

It's a film so sad and vile that they manage to make an extended cameo by Vanilla Ice somehow not the most desperate thing about it. In an interview, Samberg convincingly claimed that he believed the movie was hilarious, which means his views on comedy are in line with Sandler's, or that he's one hell of an actor. What humor the usually funny Samberg mustered just showed how much better he deserves, as a comedian and an actor. Besides, all were overshadowed by the guy in the back of my theater doing a performance piece by pretending to be someone who'd never heard a four-letter word or seen someone fall down before, squealing with breathless laughter the whole time.

Maybe this will be another classic from the Sand-man for some, but for everyone else, it's all but an atrocity. To bring back the Wu-Tang Clan one more time and borrow a few words from Dave Chappelle — a comedian who knew how to say no to money for the sake of his pride — That's My Boy is torture, straight torture son.