The cover for this issue had great art. Even though it was simple it still made me entertained and made me want to read the issue. The only thing that I was hesitant about with this issue because of the cover was Spider-man teaming up with the FF. I hoped that in this issue it would not be all about the FF because we get enough of them in their own series. I remember when Spidey had just joined the FF team we always had stories about the FF. It did not feel like a solo series anymore, but I am glad in this issue it was a not a big FF issue.

In this issue John Jameson, the son of J Jonah Jameson, is lost in space. Now it is up to Spider-man and Johnny Storm to try and save him from Doctor Octopus. They also have to deal with the crewmembers of John’s ship that have turned into Dr. Octopus’ zombies. 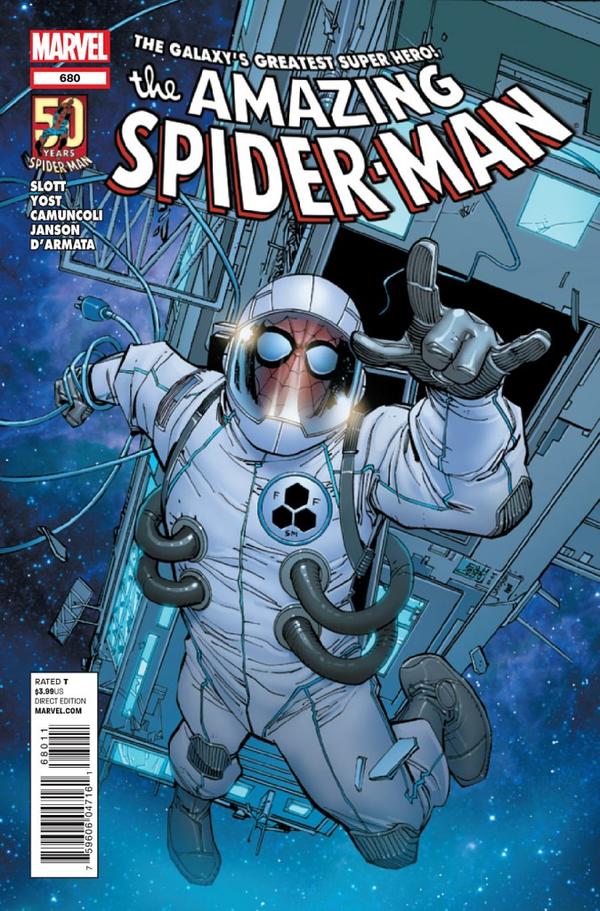 I personally thought that this issue was great. My favorite part of this issue was being able to see Johnny and Spidey’s friendship again. They have such a great friendship and they always make me laugh when they are together. They even had Walking Dead and Rebecca Black references in this issue. Even though they can act silly they also can act seriously when it is needed, which we get to see a lot in this issue. I think I enjoyed this issue so much because I have not seen Johnny since the “Three” story arc. I have not had the chance to pick up a comic with his return, but I am glad to have the chance to see him again. I hope to get more issues like this.

The art for this issue was also great. They do a lot of different styles of art for this series since the series comes out so frequently, but this has to be my favorite style of art for the series. I thought it worked perfectly for all the characters like Spidey, Johnny, and John.

I recommend you guys to pick this issue up. It was a great read and if you like Johnny and Spidey’s friendship than this is a must read for you. I know I can’t wait for the next issue, and can’t wait to be able to see what happens next in this story arc.