The Army of Dr. Moreau #1 Review: A Great Take on a Classic

Monkeybrain comics, uncharacteristically, has put out something that isn’t totally and 100% original—or so it seems.  There isn’t a story on earth that didn’t come from something, even if that something is effectively hidden from sight. Inspiration comes to us in all forms; here, it happened to come in the form of an H.G. Wells novel with a dash of real life historical context to jack up the realism. Dr. Moreau himself must have had a hand in the creation of this hybrid, as the story breaths on its own and sends chills down the spine. The Army of Dr. Moreau #1 is an original take on a classic story and an apt introduction to a fitting new direction for the good doctor and his monstrous creations. [Spoilers to follow] 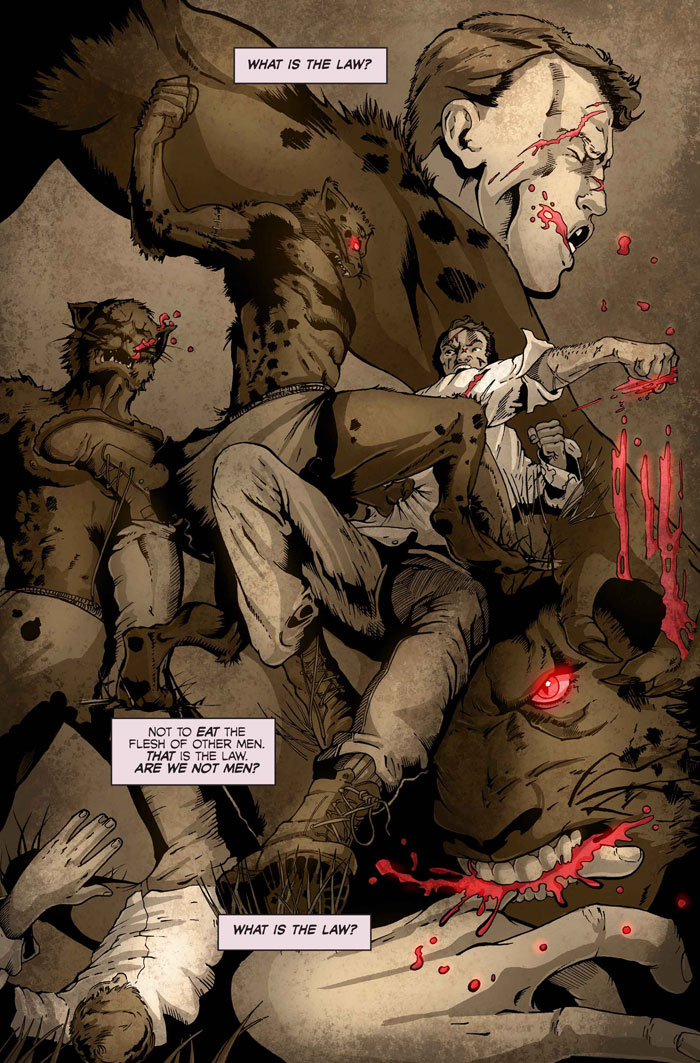 I’m particularly interested by one of the creative choices made in this story, and the result of that choice.  I’ve seen it before in comics based on books by long-dead writers, and here might be the best version of it that I’ve witnessed.  I’m referring, of course, to the characterization of that long-dead writer in this story, H.G. Wells. Wells appears as himself in The Army of Dr. Moreau.  Why?  Well, because his famous novel, The Island of Dr. Moreau wasn’t totally fictional—that is, according to the story.  The MI6 agents that the story follows don’t quite believe it either, but Wells tells them where they can find answers.

The addition of H.G. Wells lends an interesting degree of fictional credibility to the story.  If the agents are as reluctant to believe in the existence of Dr. Moreau as you or I might be, then a solid point of reference and understanding is established.  H.G. Wells and his signature brand of science fiction exist in this world; it just so happens that Moreau and his eugenics experiments do too.  So fiction’s spookiest eugenicists meets reality’s spookiest eugenicist: Adolf Hitler.  Moreau is gone, but his work has survived him, and the Nazis have gotten their hands on it. 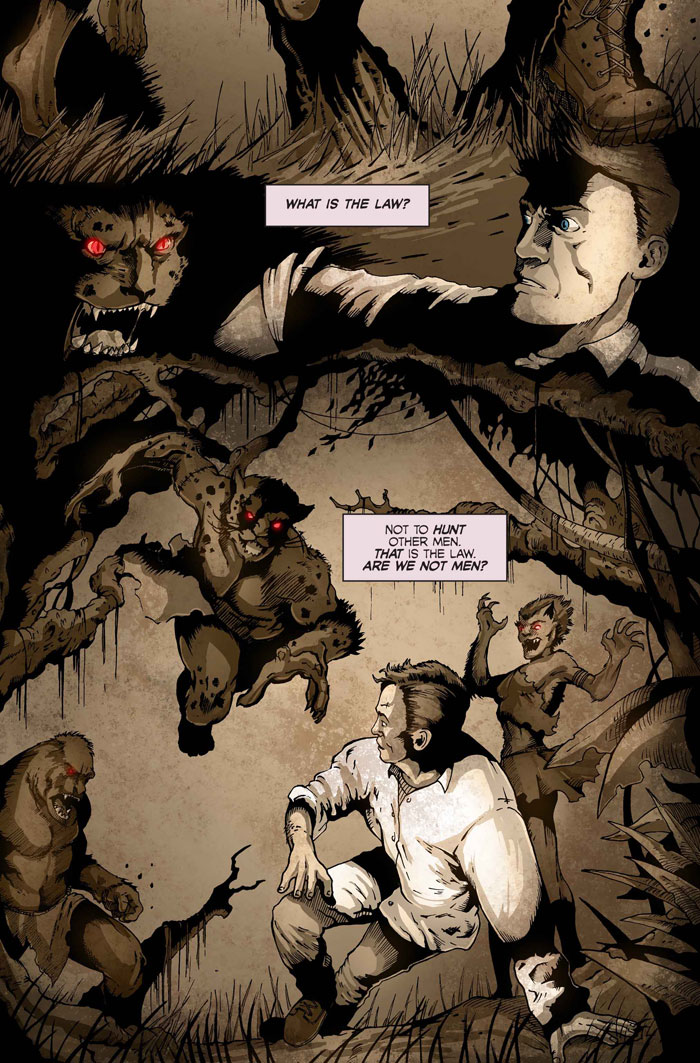 I’m eager to see just how big this story is going to get.  Will the Germans manage to create an army of genetically modified animal soldiers?  Or, will the conflict play out on Moreau’s island, never allowing the secrets to leave its boarders?  Will the Nazis run into trouble with the island’s monsters?  Will the MI6 agents?  I have to admit, I love the setup and I love the setting.

David F. Walker is telling this story in ways that only a comic book could.  The heightened realism mentioned above is punctuated by a classified document that occupies the book’s final pages.  The reader is allowed to flip through these pages and read at their own leisure.  The result is interactive and adds depth to what is already an interesting and thought provoking start to a potentially great series.  I can’t wait to see what else Walker has in store. 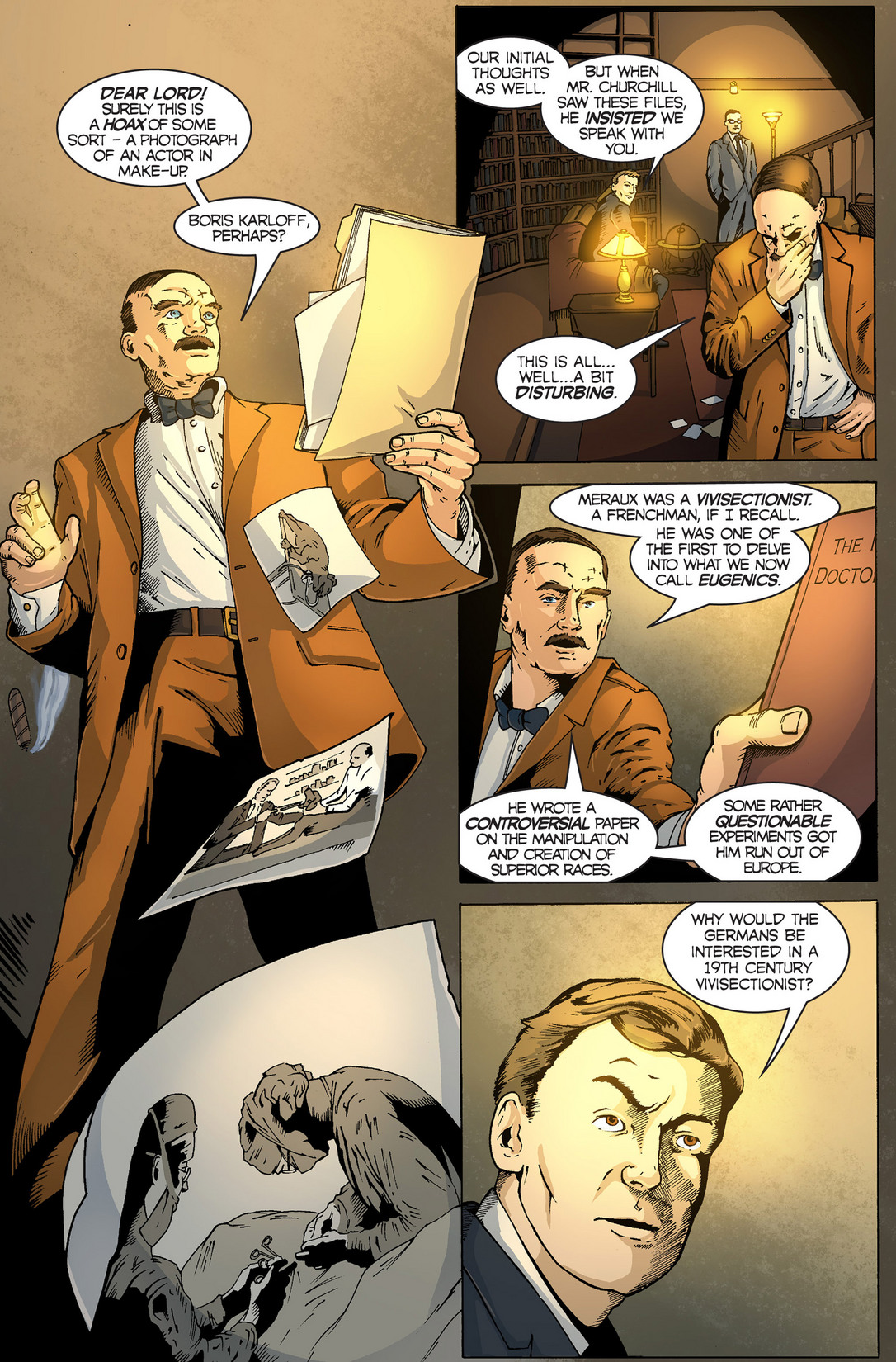 Carl Sciacchitano’s artwork is phenomenal.  Tasked with documents, dream sequences, flashbacks, and a wide range of settings and environments for the first issue alone, each of these narrative features were laid out in a clear and visually appealing way.  From the snowy north to Central American beaches, to studies and laboratories, Sciacchitano has taken on a story that’s global in its proportions and it’s a wild success.

The Army of Dr. Moreau #1 is a phenomenal first issue.  Monster horror turned World War II epic, this story is as effective a combination as Moreau’s hybrids are deadly.  It’s a direction that few people would think to take The Island of Dr. Moreau, and an exciting one at that.  I will definitely follow up on later issues, which I’m now greatly anticipating.