By: | Comic Reviews | April 15, 2014
What if science fiction’s most bone-chilling eugenicist was real? What if Adolf Hitler managed to get his hands on his research? That’s the premise of The Army of Dr. Moreau, a hybrid of monster horror and a WWII era adventure epic. With four issues out already, the climax of this story feels as if it could be right around the corner. There’s never a dull moment in this rapidly paced series about myths that turn out to be true, and the constantly debated question over whether the subjects of these genetic experiments are man or beast.

When we last left off, a team of soldiers and agents were sent to find Moreau’s mythic island with a guide who claims to have seen it all before. His name is Edward Prentiss, and for the first three issues he was the butt of jokes and ridicule. Not so surprisingly, nobody believes his claims to have seen Moreau’s creations first hand. In the setting of this book, H.G. Wells exists and so does his acclaimed work, The Island of Dr. Moreau. Only, he alleges it’s based on true events, so the skepticism of these men is easy to understand. Unfortunately, their skepticism is misplaced. 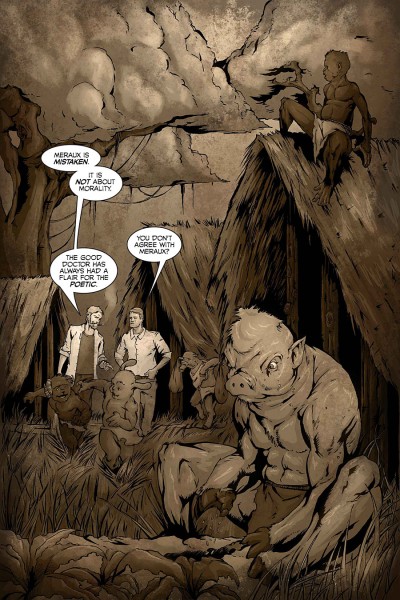 The conclusion to issue #3 left us with quite the cliffhanger. Not only does Prentiss and his team find a village belonging to the offspring of Moreau’s creations, but most of it had already been ransacked by the Nazis. All at once, the skeptics were forced to face two unthinkable realities. The first of these is that everything they thought was a lie turned out to be quite true. The second: the Nazis could be much farther along than expected, and the heroes might be both undermanned and under-gunned. Issue #4 was a homerun for a handful of reasons. It was one of those issues where a lot of unanswered questions are brought to light. Additionally, our team of heroes is going to need to start approaching their mission in new ways, so this was indeed a turning point in the story. The flashbacks to the young Edward Prentiss have opened up every issue so far, and they’re always so effective. Prentiss has an affinity for Moreau’s creations, and in his mind they’re far more than just animals. The time he spent on the Island in his younger days, it appears, was far more than a brief vacation. 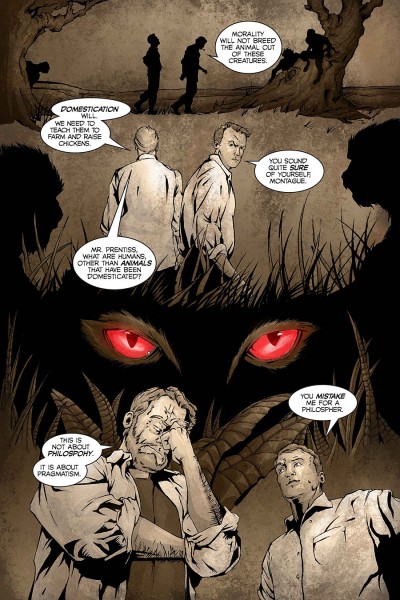 David Walker has given us a truly fantastic comic book in The Army of Dr. Moreau, and an underrated one at that. While the good and the bad might be shuffled neatly into their respective designations, that’s what you tend to get when you bring Nazis into the mix. But the black and white character morality doesn’t render this story completely without depth. Very interesting and thought provoking questions are raised about Moreau’s work and about his creations. I also believe that there’s great merit in this story’s ability to keep things interesting and in bringing the reader some good old-fashioned action and adventure. Carl Sciacchitano’s artwork is also deserving of recognition. As an up and coming artist, I hope to see him getting a lot more credits in the future. I love the layout of his panels; he brings a much-needed diversity to their arrangement over the course of each issue. I also like the design of his monsters, and the Frankenstein-ish look given to the ones created by the Nazis. This is a damn good monster story, and the creative team deserves credit. Sara Machajewski’s color work is not to be overlooked. Her flashbacks are rendered in a sepia tone, which makes for striking contrasts with her normally bright colors. 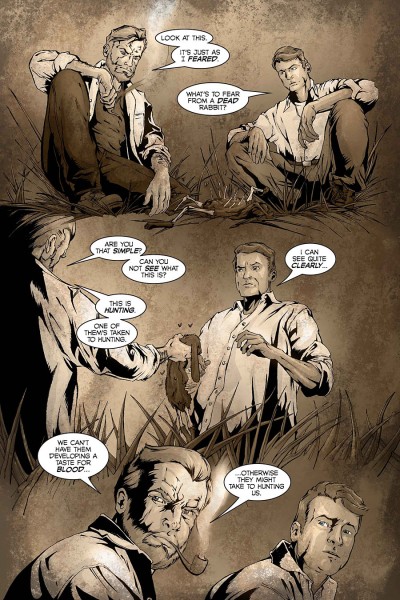 As I said earlier, the Army of Dr. Moreau is moving at a very rapid pace. I, therefore, have no intention of jumping ship now. There are big things on the horizon, and the body count among the good-guys is already on the rise. Do they have the firepower to stop the Nazis? At this point, it looks as if they’re biting off more than they can chew, and I’m very interested to see if this conflict will expand outside the borders of Moreau’s Island, or if its secrets will never leave its sunny, sandy shores.
Rating
7.5
Pros