“The Avengers” to Start Filming February 2011

Fresh off the casting of the Hulk (Mark Ruffalo) and Hawkeye (Jeremy Renner), SuperHeroHype is reporting that The Avengers is entering the final stages of pre production.

Paramount and Marvel Studios have set a start date for filming in February 2011, aiming for a May 4, 2012 release. With Joss Whedon finally contracted to direct and co-write the film, most of the cast and crew assembled and a fantastic reception at Comic Con, The Avengers is looking to be the next step in the growing superhero genre; definitely being one of the more ambitious projects out of Hollywood in some time.

Aside from Hulk and Hawkeye, Iron Man (Robert Downey Jr.), Nick Fury (Samuel L. Jackson), Captain America (Chris Evans), Thor (Chris Hemsworth) and Black Widow (Scarlett Johansson) have all been confirmed for the upcoming film. The only villain confirmed so far is Loki (Tom Hiddelston), the main villain in the upcoming Thor movie. 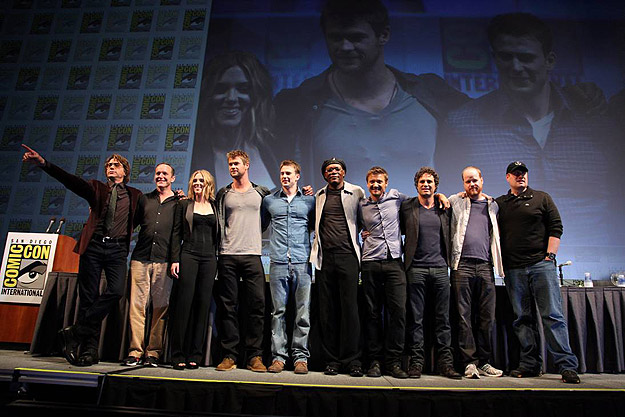 With Marvel's reboot of the Spider-Man franchise set to start shooting in December (though being handled at Sony/Columbia) and both films shooting primarily in Los Angeles, expect to see a lot of superheros running around L.A.; not counting the ones running around Grauman's Chinese Theatre.

The next big news fans are waiting for is who the Avengers will face off against and for what logical reason. Loki is a formidable foe but not a big enough name to excite audiences and fans alike.

So while we wait, we'll just sit in a corner and hypothesize who the villain(s) will be and whether or not the Joker could kick their asses (chances are, he could).