Every year, Epic Games and Intel hold a contest called “Make Something Unreal” which let’s designers create mods for the Unreal engine and compete for a chance to have their mod become a licensed, commercial game.  Publisher Tripwire Interactive brought one of that contest’s winners to the market last year; the Zombie shooter Killing Floor.  Now they’re back with The Ball, another Make Something Unreal winner originally developed by Teotl Studios.

Modders and game designers who play The Ball will probably scream “Why didn’t I think of this?”  The Ball is based on a very simple concept:  You have a weapon that doesn’t actually shoot anything, but rather controls a giant ball that you roll around a series of rooms to solve physics puzzles, and crush enemies which come in the form of mummies, giant bugs, and even a huge zombie gorilla. 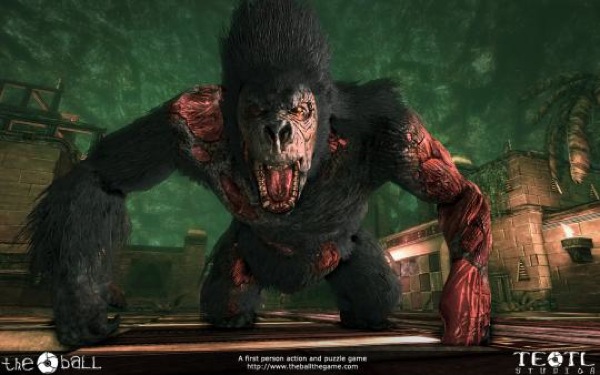 The game is set in Mexico in 1940, and you play an archeologist who gets trapped in an ancient subterranean city within a volcano.  You very quickly discover The Ball, an eight-foot wide stone and metal sphere emblazoned with skulls, along with the strange device that controls it.  Your goal is to explore and escape a bizarre tomb/ city built by the native people of Mexico, or perhaps aliens.  Possibly even demons.  You won’t really find out who until the later levels.  The story is rather light, with little dialogue, and only a few sections of expository narration as your character translates aloud some hieroglyphics.  What story there is serves to provide a plausible excuse for the existence of the fabulous Ball, and a whole city of puzzles and traps for you to solve using this wondrous sphere.

In the beginning, you face simple button-pressing puzzles in which you must figure out how to get The Ball into the correct position, while moving yourself to some other spot to hit another button.  The device that controls The Ball can summon it like a magnet, pulling it towards you.  The controller also has a “Kick” feature that will let you shove around giant stone blocks for some puzzles and you can also use it to knock away enemies without damaging them.  A few levels have environmental hazards which you can push enemies into, but the combat is primarily using The Ball to roll over enemies like a steamroller, or push it like a huge pinball of doom. 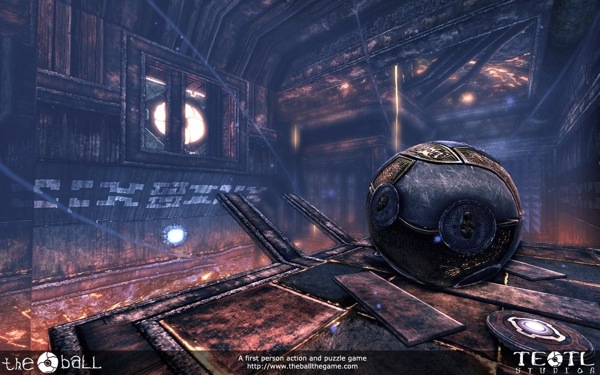 As you progress, different levels will grant The Ball special temporary powers; you can roll it through oil to leave a flaming trail, or move it close to electric generators to create a lightning ball.  There’s also a few levels which cause the Ball to give off a low gravity field too, which is a nifty power to deal with in a physics game. There are also several vehicles in the game that require The Ball as a power source; unfortunately, several of these are minecart sort of vehicles where the Player has no control over them. Mostly, you’ll be using the ball as a steamroller, a weight told down buttons, or as projectile.

The puzzles generally aren’t that hard, with the difficulty balance intended to appeal to action fans, rather than puzzle enthusiasts.  Often when I got stumped, it was because I was over-thinking the problem, and the “Solution” to the puzzle was to just run quickly past the bad guys, or jump over something.  A few of the puzzles are at the other end of the spectrum, one of which I completed by randomly running around and hitting buttons, without actually understanding WHY they were the right buttons. The designers made the commendable choice of foregoing a final boss battle, and rather had a challenging “Boss Puzzle” in the final level.  This was one of the ones that was bit too difficult, but the sense of accomplishment that came with solving it was worth the frustration. 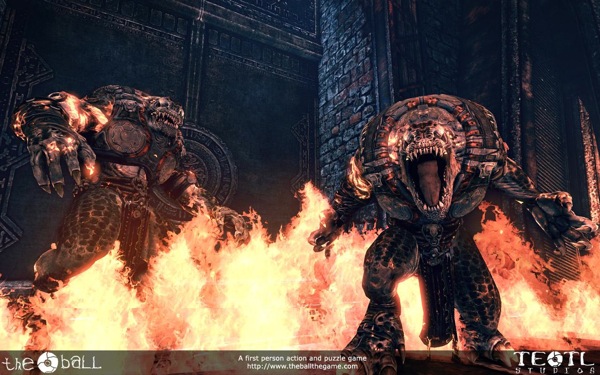 There’s some incentive to replay even after you’ve solved all the puzzles, such as the hidden stone idols concealed throughout the game; finding one gives you a little back story about the beings who made The Ball.  There is also a survival mode that pits you and your round ally against waves of bad guys.  It also has Steam Achievements, including one for killing all of the innocent monkeys who are scattered around the levels (Minding their own business before you squish them just to get an Achievement).

Halflife fans will probably notice a lot of similarity to various Valve projects; The Ball’s gun is similar to HL2’s gravity gun which let you pull and push heavy objects. The puzzle-based FPS play is a lot like Valve’s Portal, and there’s even a Mummy King who is always just ahead of you ,out of reach, like the G-Man with the suitcase in Half Life.  The Ball comes across as a bit of programmer’s joke at the expense of Vale, replicating many of their games on the Unreal Engine (Made by a competing company).

The Ball is an unusual game that offers FPS fans a chance to flex their brains and do something different, while still providing the standard FPS activity of killing zombies. It has a running time of a good eight hours, plus the survival levels.  It’s been released at a lower price point of about twenty dollars, and it’s certainly worth the expense, especially given that Tripwire has put a lot of support behind their other games, so it’s likely that DLC or extra levels will turn up for The Ball.