In 2009, the “Final Destination” franchise made a surprising comeback. What had been a teen horror series focused on deaths by freak accident went from smalltime (albeit consistent) box-office returns to a nearly $200 million revival thanks to the 3-D technology used for the fourth installment. On the heels of Final Destination 5, Player Affinity has undertaken the glorious task of identifying the most memorable death of each entry. Let’s start from the beginning (spoilers throughout).

Love it or Hate it: The original Final Destination is best known for introducing a very cool concept and capitalizing on the budding careers of teen heartthrobs. Before you roll your eyes remember that 2000 was in the midst of the teen exploitation era where almost every movie touted overdeveloped teens (or twenty-something’s playing teens) in horror, comedic, or romantic situations. It was a good time to be young and cute and Devon Sawa, Kerr Smith (Dawson’s Creek), and Seann William Scott capitalized on the brief trend. After narrowly escaping a plane explosion a group of friends try to keep one step ahead of death. The allure of this film’s premise was in the gruesome, unexpected deaths that proved as disgusting as they were comedic. As is mostly true, this first installment was the most shocking, original, and enjoyable of the franchise. 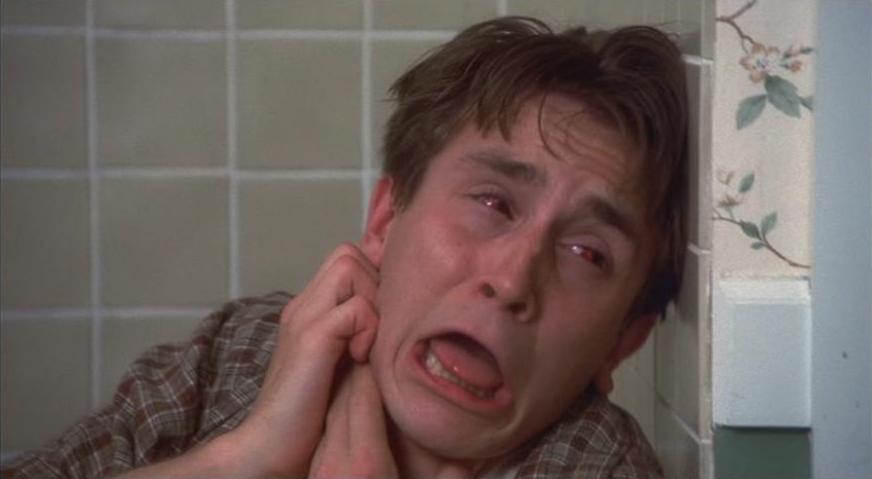 The first death of the series is one that draws a chuckle. Todd Waggner played by Chad Donella is minding his own business in the can when he slips on toilet water, flings himself into his shower, gets snagged on a cord, and slowly but surely hangs. His death is ruled a suicide, however his friends later realize that death is outsmarting them one by one.

Love it or Hate it: For continuity’s sake, Ali Larter is brought back as one of two survivors from the first film. She is in an insane asylum at the beginning of the movie but leaves after being confronted by Kimberly Corman (A.J. Cook), a teen terrified for her life after escaping death by a horrendous freeway accident. Later it is revealed that each of the people who survived was connected to those who died in the earlier film. As in the first film, two premonitions are featured in the movie. One vision always opens the film while another is shown towards the end as a red herring to throw off viewers and the characters themselves. 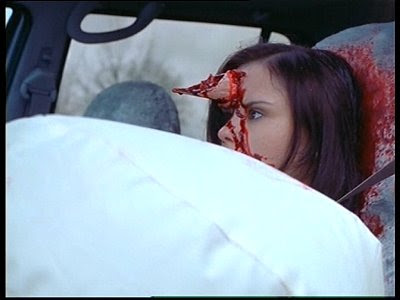 It is hard to pick a favorite death scene in this entry given how elaborate and interrelated many of them are. However, I narrowed the best moments down to two. After stalling her car full of survivors, Kat Jennings narrowly escapes being impaled. Stuck in her car off the road she lights up a cigarette and waits impatiently for the rescuers to use the Jaws of Life to pry her out of the car. In an unfortunate move, Kat moves her head in front of a broken off beam sticking through her headrest at the very moment the rescue worker jams the Jaws of Life into the car door with such force it sets off the airbag. Kat is impaled through the head and dies instantly. 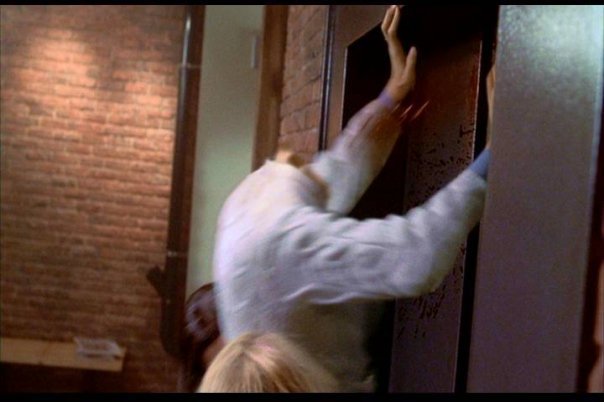 Earlier, however, is a scene so frightening it has rendered me afraid of closing elevators to this day. Nora enters an elevator with a creepy man carrying a box of artificial limbs. Freaked out that death is somehow near she attempts to run off of the elevator as the doors close, snagging her hair on one of the protruding hooks in the box. She throws her body out of the elevator only to have the doors malfunction, crushing her body and continuing to rise anyway. As she struggles and screams, fellow survivors outside of the doors attempt to pull her body out of the rising and closing elevator doors while a survivor inside tries to pull her by her head back inside. The result is an agonizingly long decapitation.

Love it or Hate it: Easily the worst installment in the franchise, but it has the best known current star in Mary Elizabeth Winstead. There is a fleeting nod to earlier films after Winstead’s character Wendy Christensen has a premonition that a roller coaster will crash and kill everyone onboard. After a few friends and acquaintances get off and escape the crash they are picked off by the Grim Reaper. A twist in this version is that Wendy uses clues from photographs to anticipate the order of each death. Although this sequel was poorly received, a DVD feature allowing viewers to stop periodically and choose the fate of the character is a reason to rent this terrible flick.

Popular girls Ashley and Ashlyn are first to die after attempting to soak their perfect bodies in UV rays at the tanning salon. Death is nearby and causes an obstruction to clasp the doors to the tanning beds shut where the girls lay screaming their bikinis off. They fry to a crisp when the machines overheat.

Love it or Hate it: This was supposed to be the last of the franchise, but money talks and this surprise hit has revived the series. Shot in 3D, this movie is the most hilarious and the most poorly acted in the franchise. Because of the added technology the deaths include many a character getting impaled for the benefit of audiences. This installment begins with multiple racecars crashing into fans and setting off accidents at the McKinley Speedway. A stampede, falling concrete, flying automobile parts are predicted by Nick O’Bannon. He gets a random group of strangers out alive, but they won’t be alive for long. This episode involves the best second premonition of the series including a death by movie theater - how META!

Again there is a tie. The writers of the film must have taken a black history course or be down for the cause. Angry over his wife’s death and eager to blame the black security guard named George who told him to leave his wife in the collapsing stadium, a racist hick named Carter rigs his tow truck with a cross he attempts to burn on George's lawn. He is hapless and drunk however, and accidentally sets himself on fire. His truck is disengaged as he stumbles back over to it and he is caught on the hook, flung backwards, and dragged down the street on fire as George looks on dumbfounded. The song “Why Can’t We Be Friends” plays as Carter is dragged to the end of the block where his truck explodes.

Not to be outdone, non-believer Hunt dives into the deep end of a pool to snag his lucky coin only to find himself sucked into a malfunctioning vent at the bottom. As the pool filter continues to add suction pressure, Hunt is pulled onto the drain on his butt and begins to drown. Finally his intestines are pulled out through his rectum as he basically implodes.

Love it or Hate it: The plot goes a little something like this: Good-looking teens survive a suspension bridge collapse after one experiences a vision where they all die. Thinking they are safe the youngsters suddenly find themselves succumbing one by one to freak accidents. Led by Bludworth (Tony Todd of the first two movies), the teens experiment with new ideas of how to cheat death. In the last installment all of the characters died despite their best efforts, as has always been the case save the exception of Ali Larter. So it will be in this installment, but hopefully with a more gratifying ending, a la the train accidents at the end of Final Destination 3.

“The Final Destination” series does not have quite the rabid fan base experienced by its torture-centered cousin the “Saw” franchise. What it does have is an awareness of what it is and a premise that simply keeps on giving. Although the push for 3D has soured some of the creativity of the death scenes, this latest installment is guaranteed to have at least 1 or 2 memorable freak accidents worth the price of admission. And if you’re dying to know, rumor has it Final Destination 6 and Final Destination 7 will shoot back-to-back if Final Destination 5 is a success.

Check it out Friday.